Every house along the water’s edge on Bainbridge Island has its own distinct character and no two are the same. Our morning walk with Dana, Tucker and Dolce was a silvery-blue affair and the sun was already hot, which augured well for the day ahead. As we strolled along, we were greeted by other local dog walkers and cyclists. The narrow road separates the houses from the sea and the land across the road from each house is owned or part-owned along with the house. Some are used as storage for boats and others have jetties or decks onto the water. 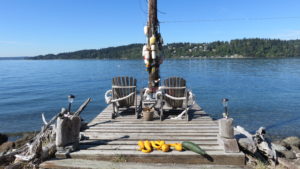 As we walked we came across a ‘Tiny Library’, which is a box at the side of the road where locals can leave used books and pick up something new to read at any time. The only rule is that if you take a book you also leave one. 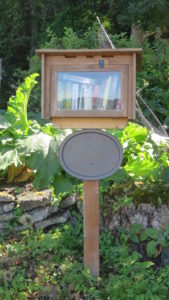 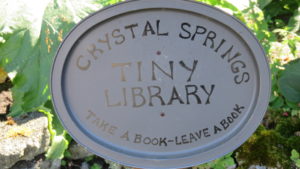 Here is a typical view from the road. 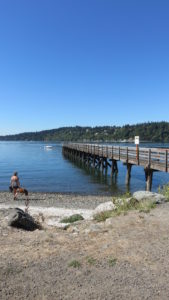 Before visiting Seattle, Dana took us to the Japanese American Exclusion Memorial and told us of the plight of the Japanese of the island during the second world war, who were rounded up, taken and imprisoned until the end of the war in response to the bombing of Pearl Harbour. They were given only 6 days to prepare to leave everything behind; friends, homes and businesses and then they were taken by boat to be incarcerated. Compassionate islanders helped by paying for the upkeep of their homes while they were away including their loans and rents so that they would have houses to return to after the war. The memorial here is moving and marks the location of their exit from the island. 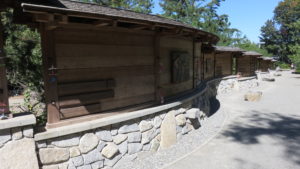 The story is told in schools and school children are brought here to learn about the people who were affected – their names and ages are inscribed into the memorial – and some leave toys and other items as tokens of remembrance. Little paper sculptures hang all the way along the memorial, left there by the locals. 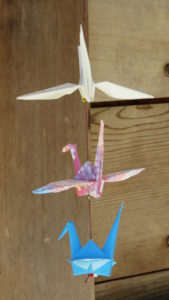 We arrived at the ferry terminal with Dana at just after 1pm and began our journey into Seattle. The journey from Bainbridge Island to Seattle takes about 30-40 minutes and we sat on the top deck enjoying the view and drinking coffee. The surrounding islands are flat and full of trees but our eyes were drawn to the ever present Mount Rainier, which loomed large on the horizon, reaching far into the only clouds to be seen in the sky. We were able to get a wonderful view of the city skyline as we approached from the west – gleaming in the sunlight. 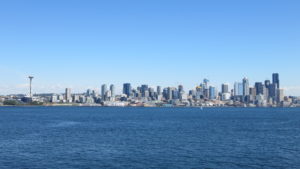 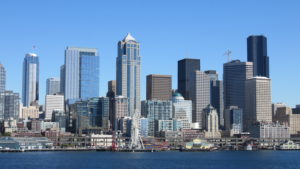 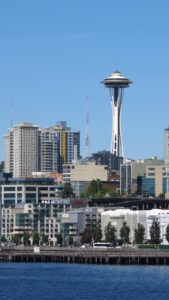 Lunch was our first concern upon arriving, after which we strolled into the city guided by Dana. One of the most striking things is the intermittent smell of Pot (Marijuana) wafting into the street from doorways or from people passing in the street. It’s ironic that the smoking of Marijuana is legal in the state of Washington, while next door in Oregon you are not even allowed to fill up your own car with gas – by law, a gas station attendant has to do it for you. We became every familiar with the smell of pot by the end of the day and, after walking through clouds of Marijuana all day, we felt pretty darn relaxed by the time we got back to the ferry.

Dana took us to the Gum Wall; an alleyway where people are encouraged to dispose of their chewing gum by sticking it onto the walls of the surrounding buildings. It has developed into an art form. 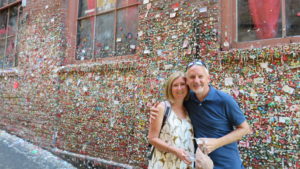 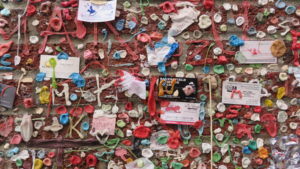 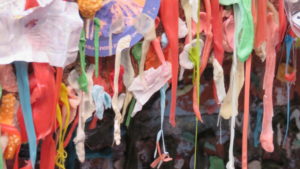 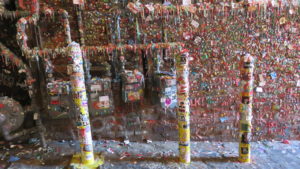 Some people even leave photos of themselves or little messages on paper. It’s clear what the person who invented this pastime was smoking at the time.

Next was the farmers’ market, which is a large indoor market selling all kinds of interesting things from food to jewellery, art and gifts. Here are some images we captured inside. 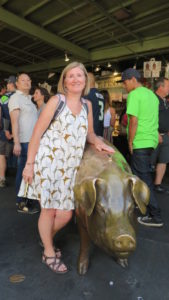 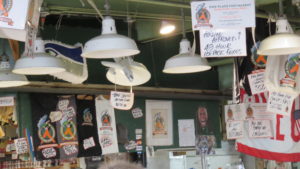 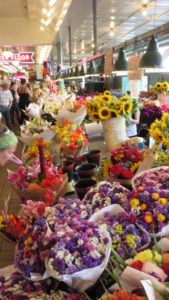 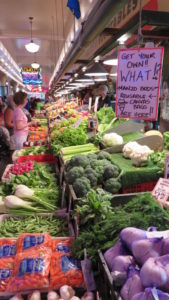 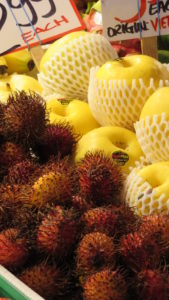 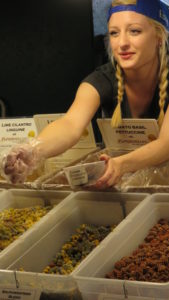 We also encountered a few characters along the way. 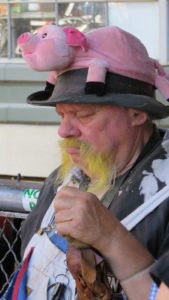 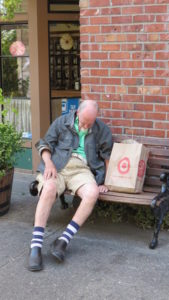 We even found the first ever Starbucks Coffee shop – Seattle is where it all began. 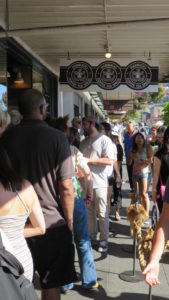 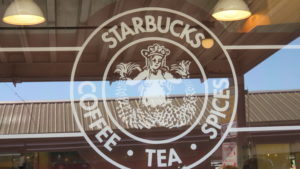 You can’t come to Seattle without visiting the iconic Space Tower and enjoying the amazing views from the top. It’s a stomach-churning ride to the top on the elevator but the view is worth it. 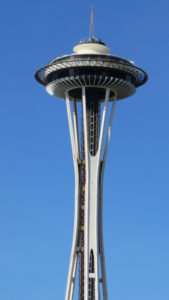 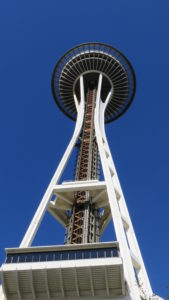 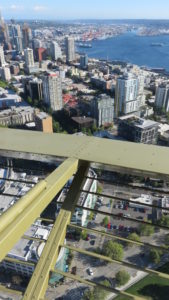 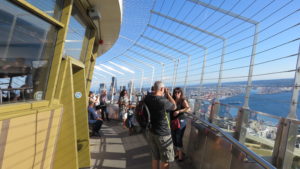 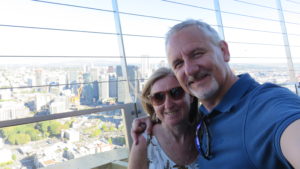 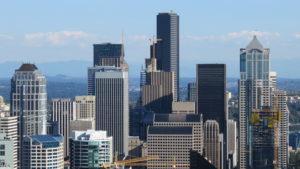 Seattle is a friendly place where people are happy to stop and chat when the opportunity presents itself. Again, we experienced that easy familiarity and endearing politeness we always find in America. On the way back to Bainbridge Island on the ferry there was a deep sense of satisfaction born of a visit to a wonderful city and possibly partly due to passively smoking Marijuana all afternoon. The sun was now low over Bainbridge and the golden glow it cast across Seattle’s skyline was beautiful. It’s an experience we will never forget.