Day 6 – To Paradise and Beyond

Mount Rainier is considered to be the most dangerous volcano in the world. At a height of 14,411 feet, if it blows, it could even threaten the city of Seattle, which was our destination today. Interstate 5 took us ever further north towards Seattle, but we decided to take a detour to visit Mount Rainier first. As we passed through Portland in heavy traffic we saw Mount Hood to the east, its pointed summit looking mysterious and majestic above the clouds. Further north was Mount St Helens; its flat summit a result of an eruption in 1980, which reduced its height by over a thousand feet. We headed east at Toledo towards the Mount Rainier National Park with glimpses of Mount Rainier along the way. It looks enormous even from 50 miles away and it dominates the skyline, its summit often hidden in cloud. It’s a long, slow ascent through the park at speeds of around 25 to 30mph as the road twists and turns towards a place called Paradise, where we stopped at the visitor centre in time for a late lunch. The view of the mountain is breathtaking from Paradise and its bulk weighs heavily on the senses and people just stand and stare, mesmerised and fixated on the snow-capped summit. Luckily, today was a clear and very sunny day – perfect for viewing the mountain. 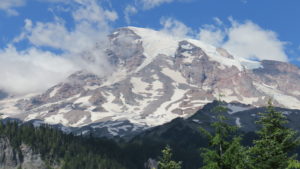 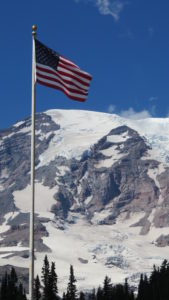 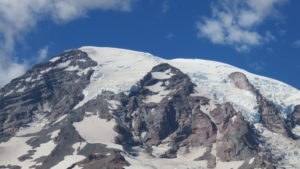 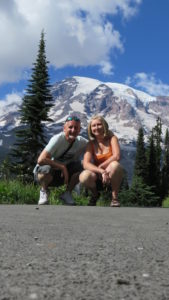 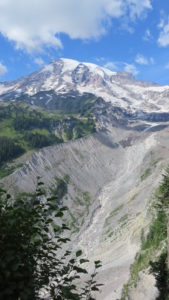 After lunch we walked for an hour or so before heading back the way we came and another two and a half hour drive to Seattle. Our destination was actually the island of Bainbridge, which is west of Seattle across Elliot Bay and the Puget Sound and to get to it you have to drive a long way north-west of Seattle via Highway 16 from Tacoma and Highway 3 before entering the island from its northern end. The sun was going down when we arrived at our destination around 8pm. We are staying with Dana and Joe; friends we made a few years ago on a previous trip to the States. As we entered their driveway we were greeted by an enormous german shepherd, which bounded over to our car. We were a little unnerved and reluctant to get out of the car. But we soon realised that instead of showing us his teeth he was showing us his toy ball and when Rachel opened the car door he leaped into the passenger seat beside me. I was out of the car in a flash! This, we learned, was a 2 year old called Tucker and soon we were introduced to Dolce; a lovely 13 year old labrador who’s a little unsteady on her feet. It was great to see Dana and Joe again and catch up over a glass of wine on their wonderful deck. We are looking forward to spending time with them and seeing the sights of Seattle. More tomorrow.