Two amazing experiences in one day – we couldn’t have asked for anything better. We had keenly anticipated our trip along the Icefields Parkway for almost a year and the day finally arrived with our journey from Jasper to Banff down Highway 93. It’s fair to say that the weather in this region of Canada has not been quite what we had expected and we should have packed some warm wintry clothes: cloud and rain has been the main theme most days here and the thought of travelling all this way to reputedly the most scenic route in Canada and have it hidden in cloud played on our minds. We were not surprised to find that the morning was chilly and cloudy but after a hearty breakfast in Jasper we joined Highway 93 for the journey south. This is not a route to be rushed –  everyone we met who had experienced the journey stressed the need to take it slowly and enjoy every bit of it, so that’s what we intended to do. We found, however, that there are numerous places to stop and to spend time at all of them would be very difficult unless making a very early start, which we had not. Our first stop was Athabasca Falls, where we parked up and walked to the falls and peered into the deep gorge created by the relentless rush of water. 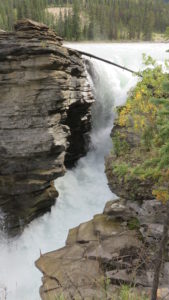 There’s a bench there in remembrance of a young man in his 20’s who felt he didn’t need to heed the warning signs and decided to climb over the barrier onto the rocks to be photographed. He slipped and was swallowed up by the torrent, his body being washed up somewhere downstream. We read that people still fall to their deaths here with depressing regularity. We also stopped at Sunwapta Falls but won’t bore you with another waterfall story – far better to take you to the main events of the day.

The weather started to pick up and I’m not exaggerating when I say that the scenery is simply breathtaking the closer you get to Banff. Every direction you look is filled with splendour – mountains so big that it’s difficult to take it in. The lakes are turquoise, the result of glacial snow and the minerals in the water and, when set against a blue sky and fluffy white clouds, the result is nothing short of glorious.

When we reached the Columbia Icefields Centre about lunchtime it was already extremely busy. As we approached, on the left was the visitor centre, set high on a hill to give the best view of the glacier on our right. We had never seen anything quite like this before – a mountain valley filled with ice; the ice sheet ending about a quarter of a mile from the visitor centre. It resembled a wedge with its thin end towards us and its thick end high up the valley and reaching the mountain top at the far end. We could see vehicles slowly driving up the glacier and stopping somewhere in the middle and people getting out and walking around on the ice (you can only really see this through binoculars as it’s so far away). 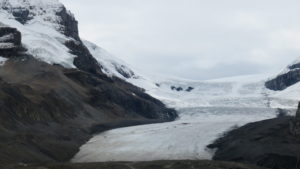 This photo is zoomed right in and cloudy weather had started coming in again so it’s not easy to see the full effect, but you might be able to see what appears to be a small black spec in the middle of the photo – that’s the people congregating in the middle of the glacier.

We had to queue for about 30 minutes to get our tickets onto the ice. There are a number of packages to choose from when buying tickets and, be warned, it’s expensive! We had a very quick lunch in the centre’s restaurant (another queue) and then it was time to take to the ice. A coach takes you to a staging post some way before the glacier starts and you have to change to a snow coach; a purpose-built transport vehicle that takes you, at a snail’s pace, up the valley and onto the glacier. 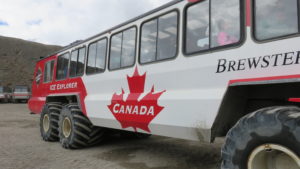 As you move up the valley you notice that the trees change, thinning out and eventually stopping altogether leaving only a harsh, rocky landscape where very little, if anything, grows. As you get closer to the glacier you begin to get a feel for its size and the scene takes on an other-worldliness – an alien quality. Once onto the ice there’s a short journey to the centre of the glacier and a small tractor-like vehicle was running up and down the icy road in some way preparing its surface for the coaches. The ice was wet and slushy in parts but the gigantic coach tires kept us on track all the way to the centre where we could step out onto the ice for about 30 minutes. Here we are approaching the glacier: 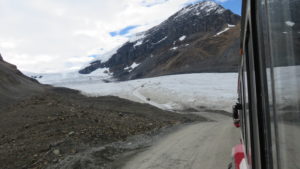 The path to the centre of the glacier: 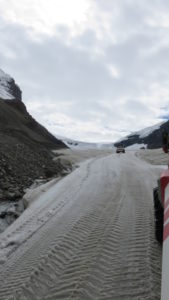 Here we are on the ice: 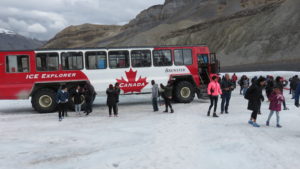 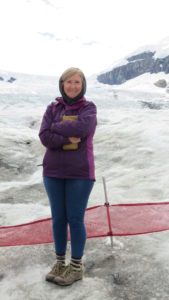 A view up the glacier: 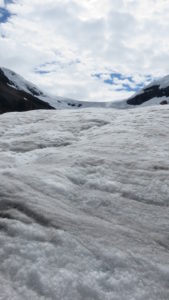 And here we are conquering the glacier: 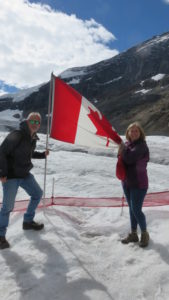 Now, I have the greatest admiration for Sir Chris Bonington, the famous British mountaineer, who was once the oldest person to summit Mount Everest, but let’s face it, he had all that training, money, gear and support – we managed to accomplish this in about an hour on only a bowl of chicken noodle soup and a packet of crisps. I reckon that with the addition of a couple of Snickers we could have tackled Everest too. Maybe next year.

Here’s a photo of us sitting on a couple of red chairs on the glacier. There are 13 of these chairs in the park, all strategically placed in scenic spots so that people can have their photos taken in them. I have no idea where the others are. What a nice idea, though. 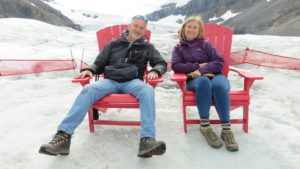 On the way back down we were told something that was very sobering – it’s estimated that the glacier was formed during the last ice age so that makes it about 13,000 years old. It’s estimated that, at its current rate of decline, it will be gone within the next 100 years. What a privilege to be here to witness it before that happens.

Our next experience was the Glacier Skywalk; an amazing glass platform jutting out from the mountain, allowing you to stand on glass, 918 ft above the valley floor. This was one of the ticket options and a bus takes you from the Columbia Icefields Centre the approximately six and a half kilometres to the skywalk. It’s a scary thing to have nothing but a piece of glass between you and certain death, especially when part of the platform was cordoned off while ‘engineers’ fixed it with nothing more than a Stanley knife and an Allen Key (I’m not joking) and Rachel was, how can I put it, a little reluctant to go out onto the platform. I’ve been banned from showing you the photo of her the moment she stepped out – pity! All I’ll say is it’s a good job I’m a qualified hypnotherapist as some basic relaxation techniques came in pretty handy! Here’s a taste of what we experienced: 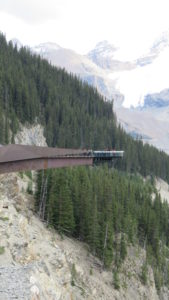 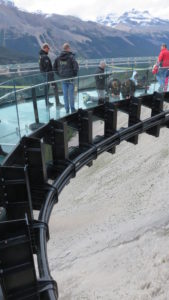 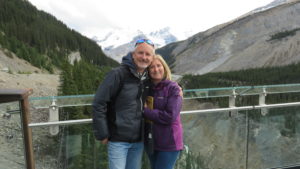 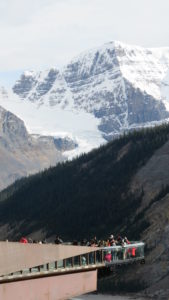 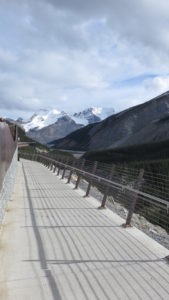