Jasper is a lovely town with a clean, fresh appearance and is certainly geared to tourism. It is clear as soon as you arrive that this is a hub for all kinds of outdoor activities like hiking, skiing, rafting and other water sports. It’s an incredibly friendly place and being here makes you feel good. 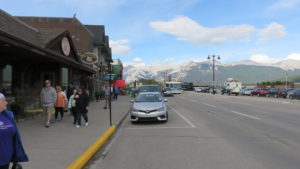 The only downside is the infuriatingly slow speed of cars on the road but this can also be an advantage when taking in the lovely scenery. Speaking of downsides, the weather was taking a turn for the worst: black skies were descending upon the summits and, lower down, white cotton wool clouds, as if stretched by enormous fingers were hanging between valley walls and mist obscured the view. The result was dramatic.

Our first full day in Jasper began with another late start due to the poor weather forecast and we had brunch in Jasper before deciding to visit one of the main attractions here -Maligne Lake. As far as we knew, Maligne Lake was the sort of picture-perfect place you would find in one of those glossy travel magazines I spoke of in the last blog and we were worried that the poor weather would spoil our experience of it. How wrong we were – its serene beauty is something to behold come rain or shine. The lake was flat and still, despite the breeze and the only movement was from one of the official boats taking people out onto the lake for a couple of hours. As usual, there was a gift shop and restaurant but they were built in keeping with the location and the restaurant provided lovely views of the lake. Due to the low clouds only the nearest mountains were easily visible but the moody weather seemed to clothe the lake in mystery and the experience was the better for it. We took a stroll around the lake for a while and here are some of the photos we took. 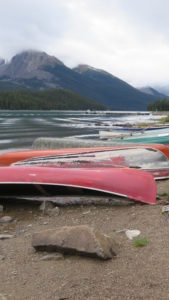 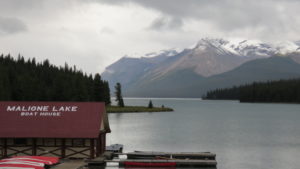 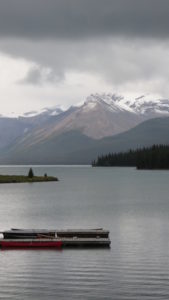 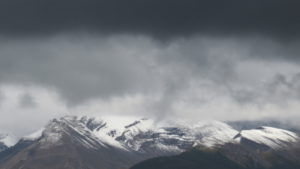 On the drive back to the hotel we couldn’t help stopping off at different vantage points to take more photos, such was the beauty of the place… 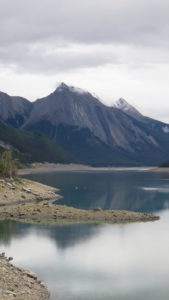 …and we also kept seeing Elk along the way. We are always amazed that they hang around at the side of the highway when they have so much space to roam. Cars screech to a halt when Elk are sighted, causing chaos on the the roads and we have to say that we also contributed to the problem on more than one occasion. 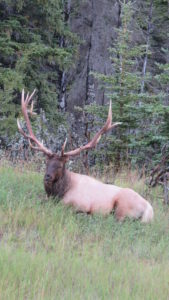 As the second full day in Jasper began it was clear that the weather was in no mood to improve so we gathered our courage and headed for town to look for a white water rafting trip. We arrived just in time for the first trip of the day so there was no time for breakfast. This would be a 5 hour excursion taking us back into British Columbia. The first time we went white water rafting on a previous holiday it turned out to be a smooth, quiet float down the Colorado River; this time we opted for a grade 3+ raft ride that would promise a much more thrilling experience.

The journey to our launch site by bus took about an hour and we made the unfortunate mistake of sitting near to the front of the bus where we could here the driver and one of the guides exchanging horror stories of previous outings and near death experiences, at which point I couldn’t help noticing that the guide’s thumb was missing. I wondered on which particular rafting trip, just like this one, had he manage to have his thumb ripped off and my enthusiasm for the trip was becoming severely dented but I managed to fight back the tears and hang on in there – we were, after all, still in the bus!

Upon arrival we were given a helmet, wet suit, boots and a windproof over-jacket and sent into a shed to put them on. Then came the safety talk, which mainly centred on what to do if you fell out of the raft and it’s more complicated than you think. The worst thing you can do is to try to stand up in the river; the chances are that you will get your foot trapped between rocks and drown – so far so good. By now I have to admit that I was shaking from the cold as the clothes we had put on were still wet from previous trips and the wind was getting up. I hoped no-one would notice. We were given oars as we were to provide the power and our guide would merely steer the raft from the back using two large oars, which were secured to the raft.

Time to launch and we were soon floating serenely down the Fraser River. There were 6 of us in the raft plus our guide and we followed instructions to paddle or stop paddling at the right moments and soon we were approaching our first rapids along with the other 3 boats on our expedition. The rapids were gentle at first and, with the approach of each rapid, our guide would tell us what to do if we fell into the water in that particular spot and the instructions were different at each rapid depending upon the terrain. The first few rapids were quite gentle but then came our first grade 3+ and we were instructed to paddle as hard as we could into the rapid. The raft dipped and slammed hard into the turbulent water and spray stung our faces and the front of the raft rose into the air before slamming back down. We were tossed about pretty violently but once through the rapid it was again calm and we had survived. Our guide then asked us all to introduce ourselves by giving our names, where we are from and something funny about ourselves. It turned out that the other 4 people in the raft with us were from the military – two men and two women. I noticed that the two women were very young and very short but, when introducing herself, one of the young women gave her name, where she was from and concluded by saying “and I’m a nasty bitch”. Phew, I thought, a nasty bitch from the military – I might come out of this alive after all. I found out later that they basically drove trucks around (logistics) and I wondered whether she would be better used on the front line, but who am I to say? Here are some photos of our exploits: 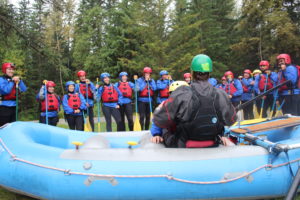 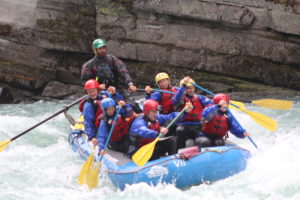 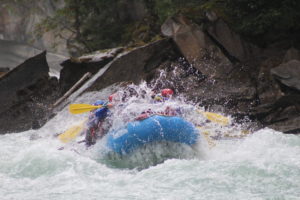 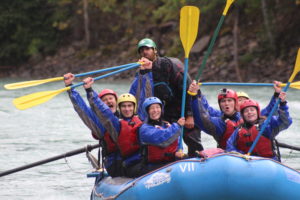 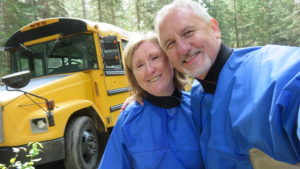 We continued down river, paddling forward or backwards as instructed while navigating the lurching rapids and it was exhilarating but very cold. At one stage we had to get the raft out of the water and onto the bank, then carry it up an embankment, over a rocky outcrop and get back into the river the other side in order to miss out a rather large waterfall. They didn’t mention this hard labour when they sold us our tickets. But we were military so who cares!
The whole experience was fantastic and we had a really good laugh but 5 hours hard graft without a scrap of food since the previous night made us dream of burgers and chips and that’s exactly what we got in the fabulous Jasper Brewing Company once the trip was over. The weather was again closing in and our next intended walk was suddenly less attractive so we settled for heading home and sitting in the hotel lounge near a large open fire and chatting to a family of Lebanese Canadians over cocktails – a quiet end to an exciting day in Jasper. Next, our final destination – Banff National Park.