The journey from Vancouver to Jasper is a whole lot of wilderness once you get beyond Hope – and the whole journey took us 2 days by car. The journey is possible in one go and would take somewhere in the region of 8 hours if you didn’t have to stop but we certainly would not recommend it and such a journey would be treacherous in Winter. We didn’t get away from Vancouver until about 11:30am and so Hope was the obvious destination for lunch and we looked forward to seeking out the Blue Moose cafe, which we had read about in numerous reviews on the internet. Hope is sleepy, its population small and consists of, it seems, single story buildings spread out to use up as much space as possible – something that is certainly not in short supply in Canada. There were very few people out and about but the Blue Moose was buzzing with people enjoying some really great sandwiches and pastries; some sitting in a small, quiet room at the back in comfortable sofas reading or browsing the internet in relative peace. Outside it was sunny and comfortably warm but dark and stormy clouds hung low over the mountains, which completely encircle the town.

Continuing north on Highway 5, Kamloops is a 2 hour journey, the scenery seemingly unchanging – just tree-covered mountain after tree-covered mountain, its undoubted beauty becoming a little monotonous after a while and so Kamloops is a welcome stop for coffee but not somewhere we wanted to spend much time. Clearwater, our final destination for the day, was only another hour and a quarter and is the perfect stopover point for those travelling to Jasper from Vancouver. We were met by Mary, our host for the night and she welcomed us into her Bed & Breakfast in an ordinary residential street just off the highway. She introduced us to her husband, Lyell and their poodle, which retreated, shaking under the table at the sight of strangers. We were basically staying in someone else’s house for the night. The evening was closing in and we had just enough time to eat out at the local Dutch Lake Resort before falling into bed at the end of what seemed like a long day.

In the morning we were keen to get away early but, at breakfast, we ended up in long conversation with the other guests: three Canadian women embarking on a 7 day hike in Wells Gray Provincial Park and a couple from Germany’s Black Forest, who were touring like us. We were persuaded that Wells Gray was worth a visit on our way to Jasper so we set off on what turned out to be a 2 hour return trip to the park, which brought us back to Clearwater. The highlight of our mini trip was Helmcken Falls; a waterfall that is 67 foot higher than Niagara Falls yet much less impressive overall. 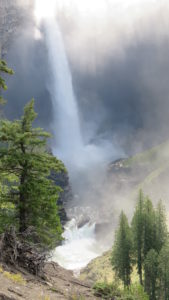 In the past, when we’ve thought about Canada, we’ve thought about the glossy images of mountains and lakes evident in travel magazines. Until this point we had not seen such idealised sights and were beginning to wonder if we would ever see them on this trip. It was not until we left Clearwater that the mountains appearing on our right began to take on the sort of appearance we were expecting and our 3 hour journey to Jasper became more exciting. After a quick lunch at The Gathering Tree in Valemount, Highway 5 gave way to Highway 16, which took us east into Mount Robson Provincial Park, where the landscape takes a dramatic turn for the better and then, the remaining journey to Jasper was nothing short of spectacular. We were now in Alberta. Next – the delights of Jasper.