Day 18 – Banff, The Wrong Lake and a Grizzly Ending

Would it be the lake cruise or the gondola (cable car) today? Well, as usual, the weather caused some indecision: one moment it looked like the cloud would never lift from the surrounding mountains; the next, the summits were clear and the sun blazed down, causing the craggy valley walls to shine and the lakes and rivers to turn a magical green. We’re in a little town called Canmore, just outside of Banff and we would highly recommend it. There’s a lovely laid-back, alpine feel to the place and there are lots of great restaurants to choose from. The restaurant we chose on our first night here was lively without being loud, stylish without being pretentious and friendly without trying too hard. It must be wonderful here in winter too, when everything is white. But fresh snow is already falling in the mountains, and the Fall is well underway in Canada – we’ve seen the trees begin to turn golden in places.

We decided on the gondola ride from Banff but the roads seemed unusually busy today. Then we remembered that it was Labour Day so everyone was out making the most of being off work. We had been told that Lake Louise would be busy on any day so today would be even busier so we changed our minds and headed there first to go on our lake cruise. It’s about a 40 minute drive from Banff to Lake Louise along the Trans-Canada Highway 1 and a great opportunity to enjoy again the local scenery, which was starting to feel very familiar. It was still only about 10 am and, nearing Lake Louise, the overflow car park was already in operation with a free shuttle up to the lake. From the bus window we saw that Moraine Lake Road – a road off to the left before reaching Lake Louise – was closed with a manned barrier and a queue of cars was building in front of the barrier. The bus driver told us that they always have to close the road by about 9am every day to limit the volume of traffic to Moraine Lake and then only admit a car when another leaves.

We reached the car park for Lake Louise after only about 10 to 15 minutes on the bus and the car park was already filling up and coaches were arriving with hundreds of tourists. We expected the queue for the cruise to be very long so we hurried along the path towards the lake. The sun was coming out and the clouds clearing and suddenly the lake was there before us and, beyond a wall of other tourists with cameras pointed down the lake, we could see the perfectly still, emerald water and towering, rocky mountain slopes, including the majestic Victoria Glacier, on three sides. On the fourth side was the amazing Fairmont Chateau Hotel standing guard behind us with its impressive facade looking towards the lake.

We looked around for where to get the boat onto the lake and suddenly realised that the lake is really quite small – it was going to be a very short cruise – and, in fact, there were no motorised boats of any kind. Come to think of it, there was no jetty on which to moor a large boat. Rachel rummaged through her bag to find the cruise tickets and, would you believe it, the ticket said ‘Banff Lake Cruise’. We suddenly realised that we had come to the wrong lake!

After we had finished laughing about it (and a bit of crying too) we decided to make the most of it and walk the path to the other end of the lake. Here are some of our lake images: 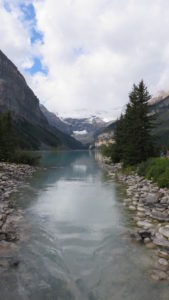 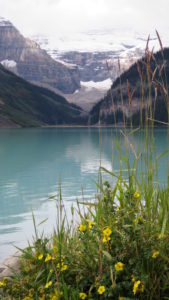 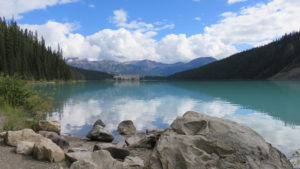 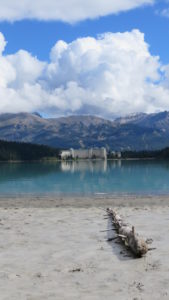 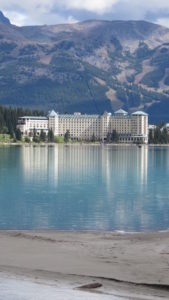 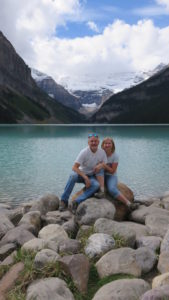 The further we walked the more we liked it here and, as we neared the end of the lake, where the water gives way to a muddy beach, we saw some tourists excitedly looking across to the other side and we realised that they had spotted a Grizzly Bear. You could see it with the naked eye but really needed binoculars to get a good view. There happened to be a park guide on the beach who told us that the bear was a female, tagged and known to the park authorities, as are all the bears in the park. She was wandering from tree to tree picking berries and looked very contented indeed. Even from a good distance you could see how big and powerful she was. Later in the day we were told how a forest of trees as long as this lake would be needed to sustain a single Grizzly – she would eat millions and millions of berries like this to stay alive and with relatively few Grizzly Bears in the Banff National Park we were very lucky and fortunate to have encountered this one. We were glad we had come to the wrong lake today. 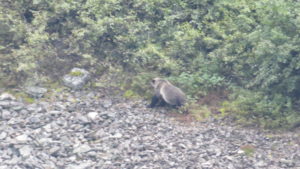 Later in the day we made multiple attempts to take the Gondola ride but the weather was such that visibility at the top of Sulphur Mountain was potentially poor so we ended up postponing the trip to the next day in the hope of better weather. Instead, we headed for Lake Minnewanka, pronounced ‘Mini Wahnka’, (yes, we were disappointed too) for our intended cruise. So, we thought the cruise was on Lake Louise (no idea why – it just felt right), the ticket said Banff Lake and it turned out to be called Minnewanka. Confused? So were we.

The cruise takes about an hour: sail out for 30 minutes, turn around and come back. The lake is, of course, beautiful but the highlight was the captain’s talk, which was witty and informative. When we told him of our earlier bear encounter he told us of his own: around this lake he and 3 or 4 others with him were crossing a road bridge when a Grizzly Bear appeared, coming the other way with its cubs. They stopped but the bear kept coming. Knowing what to do he made sure everyone had taken their sunglasses off (which look very threatening to a bear), that everyone looked to the floor and only viewed the bear out of the corners of their eyes, then he told them to link arms. This fulfils two objectives; firstly to make the group look more formidable to the bear and secondly, to stop anyone from panicking, turning and making a run for it. There’s a saying here – ‘if you run, you’re done!’ They backed up and off the bridge and the bear and cubs crossed and wandered off into the forest. The truth is that the bear had no interest in the people – it simply wanted to cross the bridge. It’s a sobering thought that, in certain parts of the park, you have to walk in groups of no less than 4 people and you must carry bear spray for close encounters. It’s easy to forget sometimes that this really is nature, red in tooth and claw! Here are a few photos from our cruise. 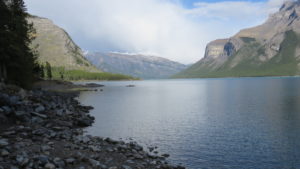 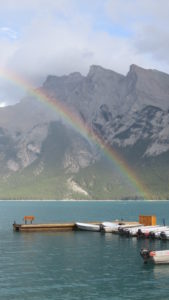 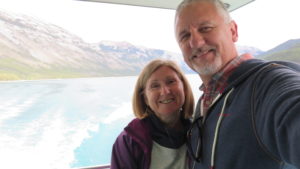 Tomorrow is our last full day in Banff.