Having the whole day to travel to Monterey we decided to visit Santa Barbara, just across the mountains from Solvang, on the Pacific coast – approx 35 minutes away. We spent a few hours there, travelling around on the Downtown Trolley and walking down by the sea on the wharfe. Santa Barbara is a great place with a slightly Mexican feel to it. It has many nice bars and restaurants, and artists line the water front trying to sell their work. On the beach were  thousands of crosses, stuck into the sand and a man shouting out the names of all American soldiers that have died in wars around the world. It was a peace demonstration. 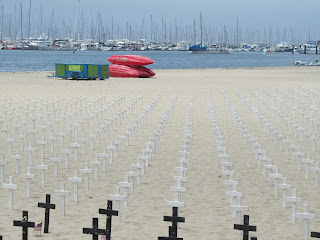 We found a nice little cafe and had tea and cake and surfed the internet for a while before setting off up Highway 1 for Monterey.

We had so much been looking forward to seeing the California coastline as we had heard so  much about it but the further north we got the cloudier and foggier it became until, approaching Monterey, we could not even see the sea or even the next bend in the road. The temperature had dropped 50 degress from Las Vegas and was now about a chilly 60 degrees. And we were pretty tired too as it had been a long drive again. One highlight of the journey, though, was that we stopped to see about 50 (at least) Elephant Seals on the beach. They were lying around and some where playing together in the surf. It was an amazing sight – something we had never seen before in the wild. 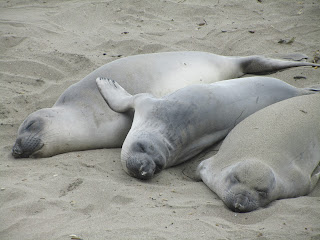 Once settled into our new hotel in Monterey we headed out to the Fishermans Wharfe to look for somewhere to eat. We ended up in the Fisherman’s Grotto and had the best meal and service of the whole month’s holiday – a nice end to a slightly frustrating day.

This morning (Day 25) we had breakfast down by the Wharfe in a little coffee shop and then found the Monterey Aquarium. We had heard a lot of good things about it in the past and were not disappointed. We saw some fantastic creatures there – a whole array of Sea Horses and Jellyfish. There were also some great feeding demonstrations in the massive tanks. This was by far the biggest and best aquarium we have ever seen. 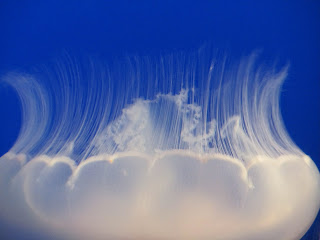 We went on a short journey to Carmel By The Sea – a very upmarket town with expensive shops and restaurants. The beach was immaculate – beautiful blue surf and white sand with quaint little (sometimes big) timber-built houses with picket fences – just the sort of thing you might imagine. A little like Cape Cod. We had lunch there before setting out again along Highway 1 in the opposite direction from yesterday as we were determined to actually see the coastline this time.

The weather was picking up but was far from ideal. But at least the fog was mostly on higher ground. Luckily,  the area around the Big Sur mountains was blessed with sunny, clear weather so we had some great views of the mountains and the coast. The coastline was very much like in Cornwall. We enjoyed driving the twisty-turny coast road in our lovely car. 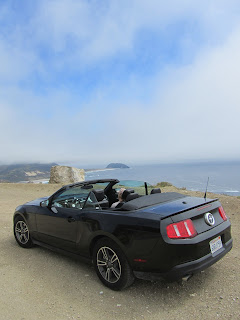 After a brief breather in the hotel later on, we walked into town and found an English-Style pub. It was pretty authentic and certainly smelled like an English pub. I had Pasty and mashed potato. They had an explanation on the menu of how to say “Pastie” (as they spelt it). It said you pronounce it ‘Pah-stee’. Made us laugh. They didn’t have Heinz Tomato Sauce or Sarsons Vinegar, but some othermake instead. And they served the Ale icy cold. Not very authentic but we didn’t tell them. We’ve heardmany Americans criticise the British for serving warm beer. They just don’t get it do they?

Anyway, tomorrow we head for our final destination – San Fransisco.