The mountains of the Banff National Park ended abruptly as we travelled eastward on Trans-Canada Highway 1, giving way to much flatter, open farmland and lots of sky. Seeing the mountains in the car’s rear-view mirror diminishing with every mile gave us a pang of regret – it truly had been a wonderful place to visit and we would be unlikely to return. So we took a detour on our way to Calgary and turned south through Kananaskis country – an area set aside for recreational activities – and on to the Peter Lougheed Provincial Park in order to experience mountains and lakes one last time. The park was extremely quiet with almost no traffic. We stopped off at Barrier Lake, parked up and set out on a trail to the lake. On exiting the car park we almost missed a warning sign that said that this was bear country and due to the berry season the chances of encountering a bear on the trail was very high. Would the chances of a bear encounter deter such an intrepid pair; a pair that had ascended the highest peaks and conquered a glacier? Damned right it would – we were about 50ft from the car and managed to make it back in 3 strides! It was our shortest walk to date.

When we arrived at the visitor centre there were only a couple of other cars in the car park and the centre looked pretty deserted apart from some men fixing its roof. Inside was an oasis of calm with photographs of Grizzly Bears everywhere. It felt like a library where we should stay very quiet and hardly breath, in case someone shouted “Shhhhhh.” Within a few minutes, however, the silence was broken by Rachel shouting “Andy, over here, quick, a bear!” Outside the window in a field a bear was rummaging around and digging in the ground. I assume it was digging up roots to eat. We rushed outside and were able to take some photos and even video the bear, which remained there for at least 10 minutes. The loud noises from the men fixing the roof didn’t seem to bother the bear and it continued digging, sometimes slumping onto its side and pushing its nose into the earth. Suddenly, there was a small crowd of people around us, all eagerly trying to see the bear. Using the binoculars we were able to see every detail; such a wonderful and unexpected experience and we watched until the bear decided to run off into the forest. Two bear encounters within a couple of days is more than we could have hoped for.

On the route between Highway 1 and the park we also came across deer and goats at the side of the road and we had already seen wild horses earlier in the day. It was a little ironic that we had left the main attraction of the Banff National Park and were treated to such a show in a relatively minor and less known park. Here’s a photo of the bear: 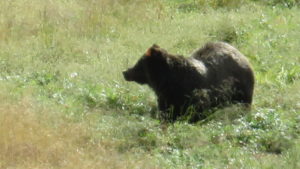 We now continued our inevitable journey to Calgary, where we would soon leave for home. You get a nice view of the city from the highway as you approach from the west; the expected glistening skyscrapers standing out on the horizon; everything looking very new. 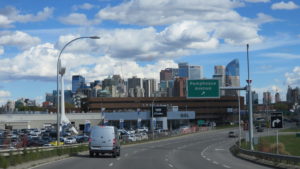 The final hotel of our trip was on 8th street and we strolled the short distance into downtown. Calgary, despite being a large city, feels quite small and intimate. The streets we used were spotlessly clean and every building gleamed as if somebody cared. We had a snack in one of the shopping centres and marvelled at how quiet it was in the heart of the city on a normal work day. It was as if the place had closed for the evening and they were waiting for the last few people to leave. Outside on 8th Avenue, which is also known as the Stephen Avenue Walk once you are in the centre of the city, there were not that many people either but there was the sound of hip-hop music and loud conversation and laughter coming from the obviously popular restaurant called Local. It seemed to be the only place with people in it. A small group of vagrants sat listening to a man play an electric piano in the street and one of them performed wheelies in his wheel chair as the others looked on. Above, the tall office buildings twinkled in the strong sunlight and the sound of the pedestrian crossings, tweeting like birdsong, could be heard all around. On first appearances, Calgary is a strange mixture of quiet solitude and big city sights; an unusual mixture indeed. 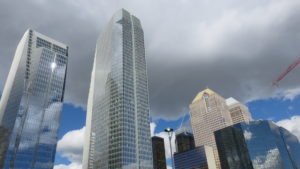 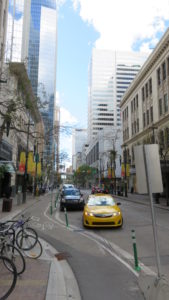 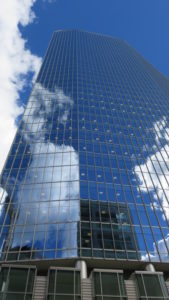 In the evening we celebrated our wonderful trip with cocktails and steaks – a fitting end to another memorable journey. 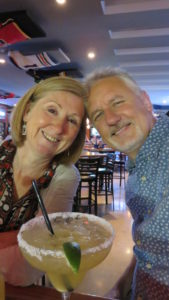 So, as I write this final entry on the morning of our departure, we have been thinking back to our trip and reliving some of our favourite moments. California’s Highway 1, top down in our lovely Mustang and the sights and smells of the pacific coast was a wonderful start to our holiday. The glorious, rugged Oregon coast and fine wine amongst the vines of the Willamette Valley will live long in the memory. The beautiful, romantic bridges of Linn County will count among our favourite days. Seattle and the warm hospitality of friends on Bainbridge Island. Our trip to Vancouver Island and our penthouse overlooking the city of Vancouver. And we will never forget the majesty of Canada’s mountains and lakes around Jasper and Banff. But as always, it’s the people we remember the most. Koshi and Jaz, who shared their cake, Ralph and Nancy who made us welcome in Eureka, Mr Grizzly and his artistic wife, Janice and her very friendly labrador in the Willamette Valley, our friends Dana, Joe and their lovely children, the poor of Vancouver’s vagrant community and Neil and Lynn from the UK who we met on top of Sulphur Mountain. The people we meet along the way make the journey much more meaningful and whets our appetite for future trips to interesting places. Where to next? Who knows. We hope you’ve enjoyed sharing our experiences in this blog and we look forward to sharing much more in the future. Thanks for reading.