The drive from the airport was quick, easy and quiet and within twenty minutes or so we had arrived at our first destination – Croatia’s capital city, Zagreb. It always takes time to get used to a new capital city but within a few hours we were beginning to feel very much at home. This is a very friendly city. Its people look laid back and happy and everyone appears to amble around in a very contented fashion. This could, of course, be accounted for by the temperature of 35 degrees Celsius, making rushing around distinctly unattractive.

The first thing that occurred to us was the noticeable lack of street beggars, something that is normally very evident in a major city. There was no-one sitting in doorways and nobody thrusting souvenirs or trinkets in our direction outside places of interest. The only people selling anything on the street appeared to be well turned out locals selling items as diverse as grilled corn on the cob, religious cards and puppy dogs (not grilled) along Ilica, the main artery that runs east-west dividing the city into ‘Upper Town’ and ‘Lower Town’.

The other striking thing about Zagreb is just how quiet it is. This was Saturday lunchtime and the streets were very quiet indeed. Apart from the blue electrified trams that travel around the city at a frightening speed there were very few cars. Frightening too, was the fact that nothing separates the enormous trams from pedestrians or other vehicles and you have to keep your wits about you so as not to inadvertently wander into their path. 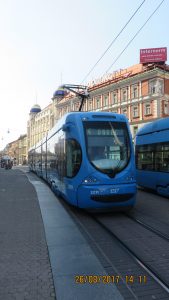 We always find ourselves comparing a capital city’s traffic with cities in other countries we have visited and we must say that drivers in Zagreb are really very gentle and polite. I’m with Bill Bryson on this one. In France, Parisian drivers actually want to kill you and will often go out of their way to do so, whereas Roman drivers, while not actually wanting to kill you, will not hesitate to do so should you happen to be in their way unless you are a nun. Everyone stops at a traffic crossing for a nun. But try stepping out onto a crossing in Rome with no nun within a few inches of you and you’re asking for trouble. Maybe that’s why there are so many nuns in Rome. In Zagreb, however, it wouldn’t be surprising if a driver stopped for you at a crossing, got out of his car, took you by the arm and helped you across the road before returning to his car to continue his journey. You only have to pause momentarily to, say, check your watch or answer your mobile phone and, if you are near a crossing, all the traffic will stop and you can see the drivers’ faces smiling politely at you through their windscreens wishing you a safe crossing and imploring you not to rush on their account.

It turns out that Zagreb is a city for strolling, eating and drinking. It’s a pleasure walking its streets and admiring its impressive Austro-Hungarian architecture. Every building is ornate in some way, solid and very very large. The only exceptions to this are the sometimes dreary and particularly depressing socialist structures around the city. This is a city of squares, containing wonderful outdoor restaurants and bars and where most of the people are to be found, eating drinking and usually smoking.

Food here is really quite inexpensive compared with the UK and beer is especially cheap. Beer is around the equivalent of £2.70 for a half-litre glass (large). Outside of the main city we have seen beer sold for as little as £1 a glass and the quality is extremely high. So if you like dining outside in impressive surroundings and great weather this is the city for you.

Here are some of the sights we have enjoyed here on day 1 of our trip: 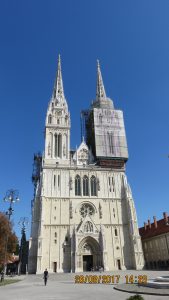 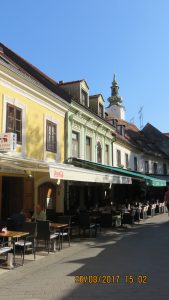 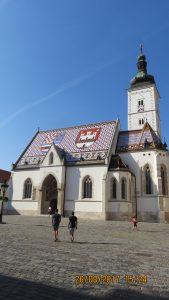 An elderly couple ‘busking’ in the street: 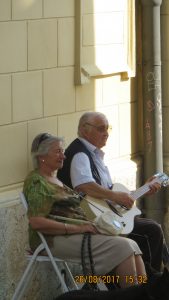 An evening photo of a street called Tkalciceva which is the best place to eat and people-watch, in our opinion: 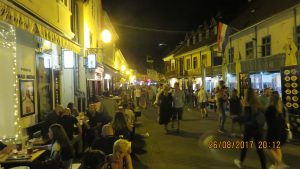 We had dinner here at the Sri Lankan Curry Bowl where our excellent meal cost the equivalent of £16 for two including drinks. By 10pm this street was buzzing with people. Music spilled out onto the street and we drank cocktails until late. 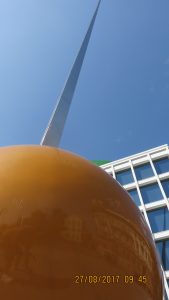 On our second day in Zagreb we explored the Lower Town, walking south to the Botanical Gardens, where we saw some strange sights: 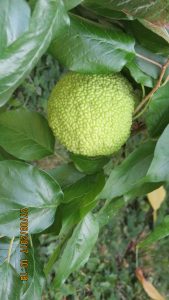 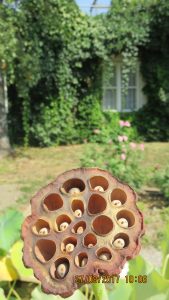 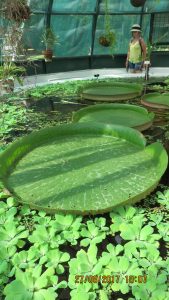 We encountered some impressive architecture in the south: 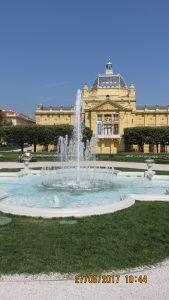 which is the first thing you see if you arrive in Zagreb by train at central station. 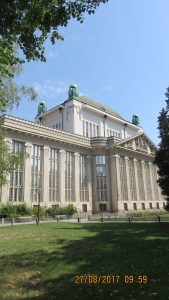 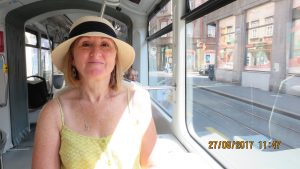 and Lake Jarun, Zagreb’s very own riviera; a man-made lake constructed following a catastrophic flood in 1964. It has pebbled beaches for sun bathing and swimming. 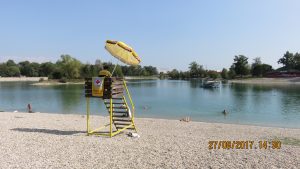 You can walk for hours around the lake and along its channel but the heat was oppressive so we retired to the Macao Beach Bar for cocktails before heading back into the city. After a much needed rest our final evening out in Zagreb consisted of the largest £6 pizzas we have ever seen and tomorrow we head south-west and the Adriatic coast.