We felt really sad leaving Florence, especially the B&B we had enjoyed there. Flaminia – our host – had restored our faith in italians’ nature. She was a lovely, warm woman, who made us feel at home. She baked all her own cakes and breads and served them at breakfast; hot from the oven. Here’s a picture of her this morning before we left. 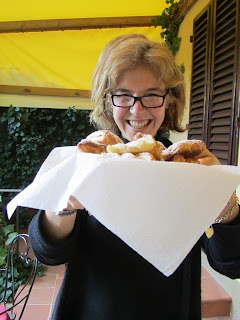 As we prepared to go she gave us a bottle of wine as a gift. We’ll certainly remember her.

We had a long drive ahead of us to Rimini on the east coast and we had decided to go via Montepulciano, which was a lot further south than we had thought. But when we arrived it was worth it. Set high up on a hill this little town was quiet and peaceful. We could hear music being played from the school of music and it echoed through the streets. The square had an ancient feel to it – unspoilt – that is until Rachel fell asleep on the steps of the church! She had the look of roadkill about her but I didn’t have the heart to wake her. Instead, I did the decent thing and took a load of embarrassing photos of her! I would have posted them here but she said if I did she would hurt me! Fair enough, best to back down while you can.

And Montepulciano was the only place we came across free toilets. As it turned out ‘free’ meant no toilet tissue and no hand towels. Asking the lady, who was looking after the toilets, if there were any more she replied “No!”. A familiar response.

Here’s a photo of the square: 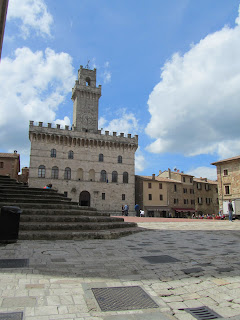 We had a snack in the ‘Jazz Wine Bar’. The beer pumps were made out of saxaphones! The husband and wife owners were real characters. She did all the cooking and he did all the front of house work. The food, when it came was simple and authentic but it took an age to come as it was prepared from scratch. We communicated with them using hand signals as they spoke no English and we no Italian. She brought us extra food, freshly prepared and at no extra cost! What a nice experience. 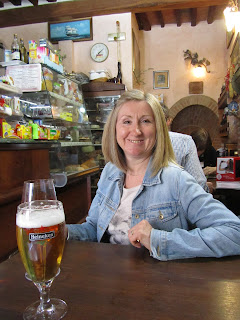 Our next journey was to Rimini and it took nearly four hours, mostly due to the sat-nav. But we did get to see some wonderful countryside in the process. So I must cut this blog short because, after six hours driving I’m ready for sleep. Before that, I just want to mention Italian drivers. It’s a nightmare driving in Italy at the best of times and today we came to a roundabout, which was completely gridlocked and all because not a single driver would give way to anyone else. They just jostled for position and sounded their horns. I’m sure Italian men see giving way as an attack on their manhood – a personal failure. What’s the point of a roundabout if no-one obeys the rules?

Anyway, here’s one of those shots of Rachel – she’ll never know and I can run faster that she can. 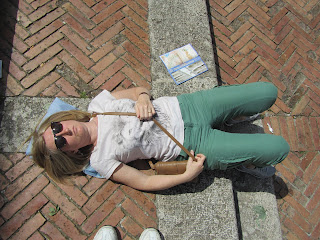