We awoke to brilliant sunshine and a significantly warmer day. Bologna had been a disappointment and Florence had been a bit of a wash out. But we had high hopes for Siena. The journey took only about an hour and we were lucky enough to find a free car park just outside the city centre. We headed straight for the Piazza del Campo through some beautiful streets. Siena is quite hilly, which makes the streets more interesting. We liked Siena immediately.

We entered the Piazza del Campo down a long, narrow flight of steps and the explosion of space and sound was exhilarating as we descended the last step. Across the fan-shaped expanse , the Torre del Mangia – the second tallest bell tower in Italy – dominated the scene. 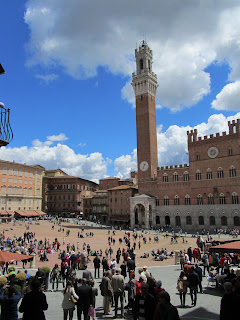 Around the perimeter of the piazza were numerous restaurants with many people sitting and gazing at the sights. Others stood around the centre and there was an excited chattering echoing from all directions. We chose one of the restaurants and ordered a Spritz and a Pina Colada. 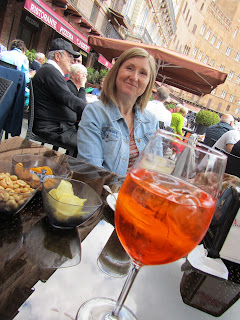 Refreshed, we headed for the Duomo. It was only four Euros each to enter and it was the first time we felt we would have paid more: the interior, like the exterior, certainly had the wow factor. Its Gothic style and black and white marble made it different from anything we had seen before. The attention to detail was quite breathtaking. There was, however, a very repetative, monotone “No flash” coming from the many officials keeping watch. There were countless arguments between couples trying to work out how to disable their camera flash! 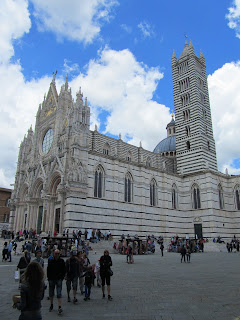 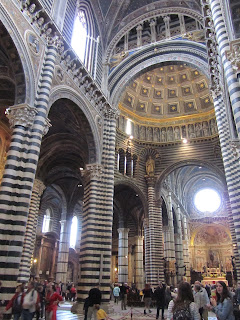 We have far too many great photos to be able to share them here.

After a long walk around the city we returned to the Piazza del Campo and by now it was full of people enjoying the hot sunshine. We sat and lay on the floor just soaking in the atmosphere and soon heard the sound of drumming. A parade had begun and a long precession of drummers (a marching beat) and flag bearers emerged into the piazza and walked the perimeter before exiting at the opposite side. It was a colourful spectacle and an unexpected bonus before we left. We didn’t want to leave but Siena will live long in our memory. 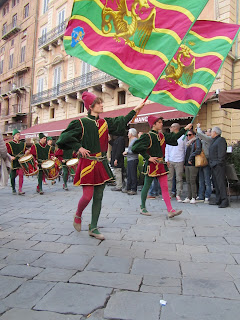 It was around 5pm when we left and headed back towards Florence but by a circuitous route, through the Chianti region. We drove though miles and miles of beautiful vineyards and stopped at Badia a Coltibuono – an abbey for centuries and a winery for over 10 years. It was a beautiful, peaceful place set on a hill, surrounded by acres of vineyards and olive groves. We entered a courtyard and wandered, unhindered, throughout the abbey interior, its cellars open, its gardens free to roam. When we asked about wine tasting it turned out that we had come at precisely the right time – the one time in the year that the abbey is open to all, freely, with free tour and wine tasting! So we had a personal tour and ended up beneath the abbey in the cellars, where the wine is matured. We could not believe our eyes when they showed us the personal collection of the family that owns the estate and saw wine dated to the second world war! There were walls covered with bottles from the mid 1930s to the 1990s: covered in dust. It was truly amazing. The wine must have been worth millions. 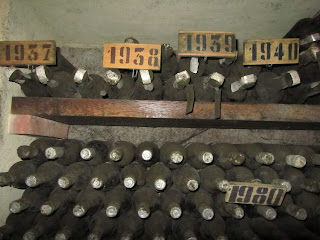 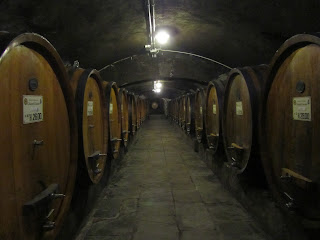 Rachel couldn’t wait for the wine tasting,so she started in the cellar: 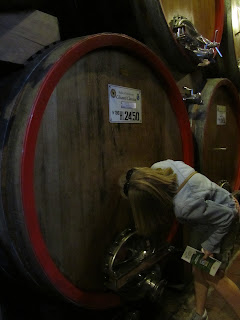 Finally we were given a wine tasting. They took us through their collection from the Chianti Classico to the Reserva. I, for one, thought I had died and gone to heaven! On the way out we bought a couple of bottles; one to drink while we are here and one very special wine to share with our good friends back at home (you know who you are).

We headed home after a perfect day and managed to get lost when our sat-nav went all HAL 9000 on us! So the journey took longer than expected and we were getting hungry. Rachel made a wish to find a McDonalds and low there appeared the golden arches. Don’t judge us! There’s only so much pasta and pizza one can eat! Even in the culinary capital of the world you can’t deny your natural urges for a Big Mac after a long hard day. This is the second time we’ll say ‘God bless America!’

Tomorrow, we head for the sea.