What a great day we’ve had today! When we arrived in Rimini last night our hearts sank at the sight of what looked, on the face of it, like Blackpool in Italy! The waterfront was wall to wall concrete hotels. What would have been a beautiful sandy beach had been divided up and sold off in portions: little plots of land to lie on. Hardly any sand was not either built on or covered in parasols! So this morning we wondered what the day had in store.

But we found a book in hotel reception, which had a good article on San Marino. We knew nothing about this place before we came but the day we have spent there could not have been better. It turns out that San Marino is the oldest republic in the world; independent and self governing. It’s split up into 9 administrative districts called ‘castles’.The capital (San Marino) is on the very top of Mount Titano (750m above sea level). From a distance you can see three distinct peaks, each one a tower. The towers are called Guaita, Cesta and Montale. The journey from Rimini to San Marino took about 30mins. The roads (as most of the roads we’ve encountered in Italy) were in a very poor state of repair. But as we passed under the bridge that marks the Italy-San Marino boundary there was a distinct and immediate change. The roads were in much better condition and the buildings were of a higher quality. High class shops lined the streets and even the zebra crossings were a different colour. There is very little unemployment and no budget deficit. There are references all over San Marino to ‘Liberty’, refering to its liberty from Emperor and Pope, which makes San Marino a great place to live I would expect.

We drove to the very top of Mount Titano, although we could have taken the cable car. The views from the top were stunning – stomach churning at times. The streets were narrow and full of very expensive shops selling mostly leather goods and jewellery. The town was filled with the ringing of bells, the air with the sound of swifts swooping and diving around the cliffs and into the streets. It was truely a wonderful place to be. 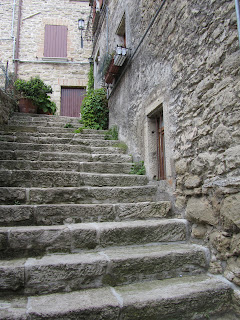 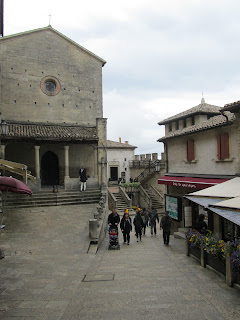 We visited each of the three towers, each one looking majestic upon the sheer cliffs of the city. One was used as a prison as recently at 1975. 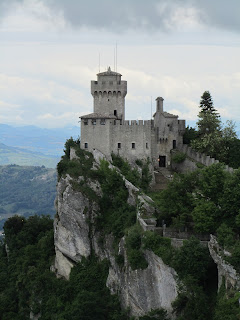 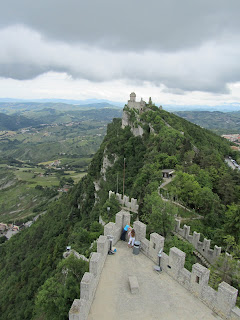 Later we ate in a lovely restaurant on the edge of the cliff overlooking the great expanse of land between us and the Adriatic Sea. On leaving the restaurant we noticed how quiet it had become. The streets were deserted, the shops closed. San Marino had become a ghost town. We headed back to the car and started our journey home, after one last look at the distant mountains in the late evening sun. 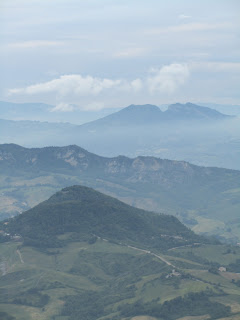 Our evening finished with cocktails by the beach in a lively little bar. 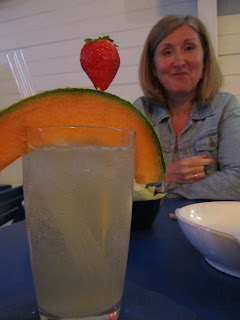 It had been a perfect day. 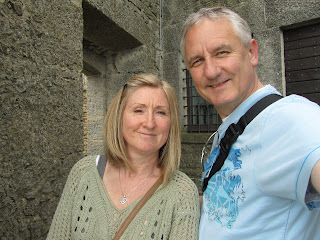