The northern approach to Split from Trogir presents the traveller with a wall of concrete high rise blocks, added to which is wall to wall graffiti at their bases. It’s a depressing sight and makes you wonder why you’ve come. We made the decision to park the car about 1 kilometre north of the city (there are signs for ‘tourist parking’) and walk the rest of the way. We had already experienced how difficult it can be parking in city centres, especially since most parking is by use of parking metres and you never have enough coins for the full day.

So we walked gradually downhill and had breakfast of fruit pancakes and coffee before reaching Strossmayerov Park, across which is a sight that raised our spirits: the northern wall of the emperor Diocletian’s Palace. This was Diocletian’s retirement home. Unusually for a Roman emperor, he lived long enough to retire into grand luxury, unlike others who hung on until leadership was taken from them. You can see that retirement was a sound choice in this case when you see the grandeur of the palace he had built for himself beside the sea.

Approaching the northern gate you can’t help but notice an imposing statue of the Croation bishop Gregorius of Nin in a captivating pose at the top of the steps leading down to the palace gate. 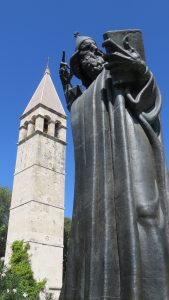 The big toe of his left foot is smooth and shiny due to the many visitors rubbing it for good luck. It’s also supposed to guarantee your return to Split.

Here’s the northern gate. There are three others and all gates are named after a metal: Golden Gate (north), Bronze Gate (south), Silver Gate (east) and Iron Gate (west). 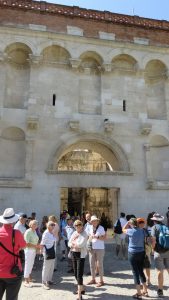 Stepping through the palace gate, which has been beautifully restored over the years, you enter a whole different world to that which lies outside the walls: a labyrinth of narrow streets with large, shiny cobbles underfoot, interesting art shops, boutiques, bars and restaurants. This is the heart of the the city and has been inhabited for centuries since it was the home of Diocletian, and the vast majority of the buildings within the walls are post-Roman. Amazingly, if you want to see an original Roman street you need to find a specific boutique, where the original Roman floor remains. People on guided tours stand outside, peering in at the floor through the door.

The palace was also intended as a fortress and had towers built into the walls, one of which is shown below. 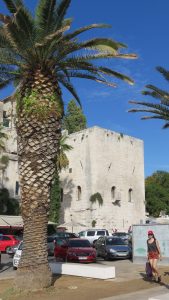 In the time of the Emperor the sea washed up against the palace walls but today there’s a road and promenade with more cafes and restaurants in front. 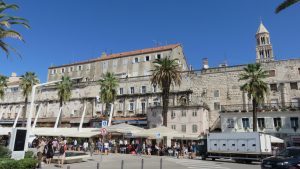 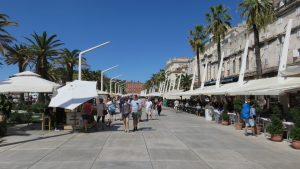 The central square of the palace is breathtaking because you come upon it almost by surprise from one of the tiny streets. It feels enormous with red columns and sphinxes brought from Egypt and marble brought from Italy and Greece. Amazingly, one of the sphinxes dates to the 15th century BC – Diocletian spared no expense in the pursuit of a comfortable retirement and you’ve got to admire his style. 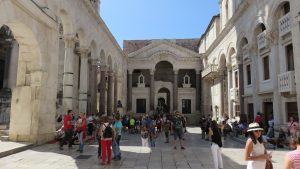 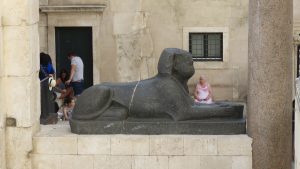 Underneath the southern end of the palace are a labyrinth of halls, which were originally used for the storage of food and other goods but also to raise the emperor’s living space above sea level. Today, some are used for stalls selling art and jewellery. 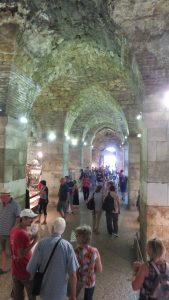 The others are left empty for visitors to walk around and are virtually unchanged from the time the palace was built. 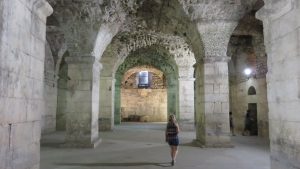 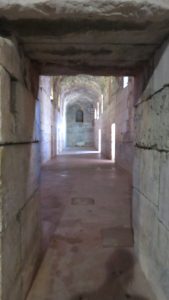 Another original Roman building is Diocletian’s mausoleum and it would be wonderful to think that the emperor was still there. Unfortunately, because the emperor was such a persecutor of early Christians, once Christianity became more mainstream the early church took over the mausoleum, built a cathedral next to it and transformed it into a place of worship. There are various theories as to what happened to the body of Diocletian but many believe the early Christians either destroyed it or threw it into the sea! Thankfully the main structure is still intact and there are carvings depicting the emperor and his wife high up just below the ceiling. 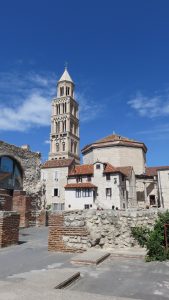 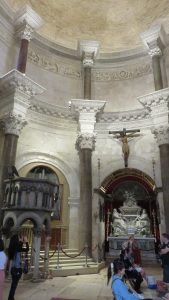 The Vestibule was the formal entrance into the imperial apartments. It’s a cavernous, domed room and open to the sky. The acoustics are amazing and we listened to a male voice quartet singing there. It was very moving. 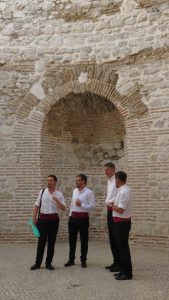 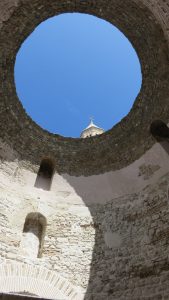 As the day wore on we needed to get to the car ferry to take us on to our next destination on the island of Hvar, a two hour trip between the islands off the coast Croatia. It was nice to think that beyond these islands is the east coast of Italy and a little further – Rome. 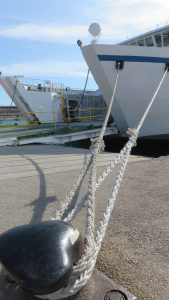 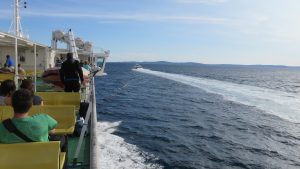 The trip across to Hvar was smooth and beautiful and we watched the islands slide by and even had a little snooze.

Once on the island, we had only about a twenty minute car journey to Hvar Town. By the time we had found our accommodation and settled in it was dark and we headed into town.

We had heard that Hvar is ‘flashy’and ‘trashy’ at the same time. 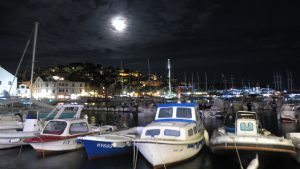 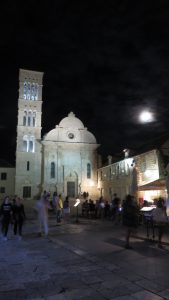 We certainly found it to be flashy with a harbour filled with boats and some very impressive and expensive yachts and the further we walked around the town the more we realised that the average age of the people around us was about twenty-two so, of course, we fitted right in! There was a lot of shouting and as the night wore on there was a great deal of staggering about – not us, the beautiful young things, both men and women, fresh from a day on the beach or the water with a great deal of alcohol sloshing about the place. We didn’t realise that this is Croatia’s premiere party town. But now it was too late so, after a great meal and lovely local wine, sat within the marbled main square, we headed off home to bed, where all the oldies should have been at that time of night.

In the morning there was not a single person under the age of about thirty out and about until at least lunch time and we gloated that they must have had severe hangovers from the night before, whereas we were as fresh as daisies and able to climb up to the Fortress (Fortica) above the town, where we were rewarded with a commanding view of the town and the islands. 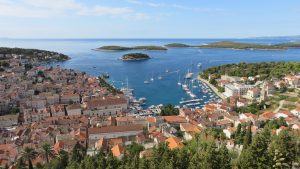 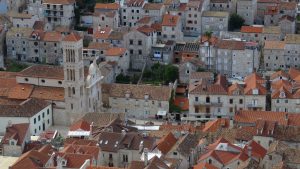 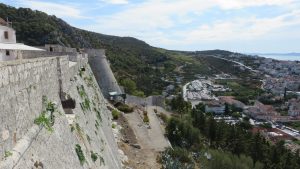 Our day was spent around the town and consisted of breakfast, walking, coffee, walking, lunch, more walking, lounging about reading, more walking, cocktails, slower walking, dinner, wine and very slow walking – crawling really and barely making it home. We really taught the youngsters how it should be done! 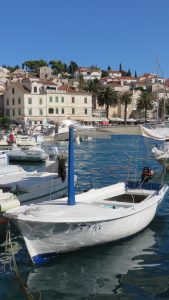 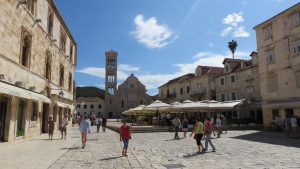 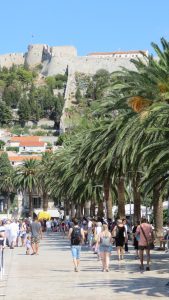 Tomorrow we head for Dubrovnik on the last leg of our journey.