Things didn’t start quite as expected! We had an immediate flight delay from Manchester as the incoming flight from Philadelphia arrived late. Rachel made the most of the delay by sleeping across four seats in the lounge. 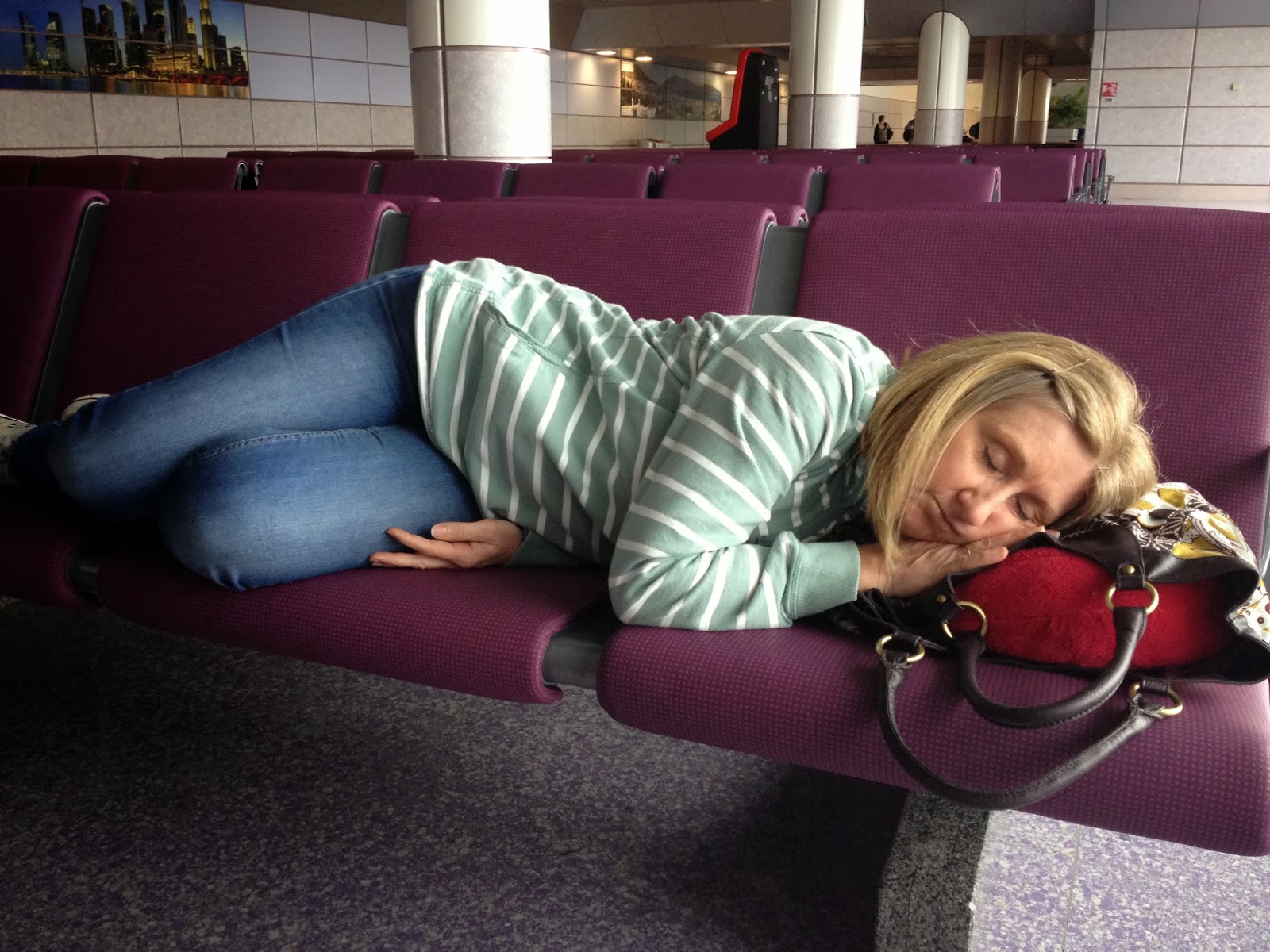 Once on the plane and all set to leave we had another delay – the front door would not close. In the car or on the bus I would not be too bothered, but on an Airbus A330?! The captain put our minds at rest by announcing the problem to be “debris stuck in the door”. Ah, thank goodness for that; we felt much better (not). The flight went well and the door stayed shut and we watched films all the way to Philadelphia. We hoped to make up enough time to make our connecting flight to Miami but as we left the plane at Philadelphia a new ticket was thrust into our hands and we had been booked onto an alternative flight. That flight was only an hour and a half away so we were not too bothered, until we realised it was going to Charlotte in North Carolina! Standing in Baggage Claim we thought we might still make our intended connecting flight until Carousel 4 ground to a halt and didn’t start again. This time the problem was a “blockage”. I was wondering whether it  was ‘debris’ when the inevitable announcement sent approx 300 grumpy people sweeping like a herd of migrating wildebeest towards Carousel 2, which was apparently working for now. Baggage now in hand we headed out into the airport. Thankfully, we realised we might have to check our bags in again due to the flight change. No one told us this but if we had not bothered to ask, who knows where our bags would have turned up! Anyway, another passport check and another queue, plus yet another passport check, security check (shoes off) and a full body scan and we were feeling extremely safe but very very late and started worrying about meeting our new flight to Charlotte. But meet it we did. One thing I wanted to mention: we are constantly amazed at the reverence the American public has for its military personnel. They get onto flights first and have preferential treatment in restaurants etc. But I was moved to see a complete stranger stopping a couple of young men in uniform in Charlotte airport and shaking their hands, thanking them for their service. I wondered whether this could ever happen in the UK and I think I know the answer. No further checks in Charlotte and we caught our final flight to Miami, arriving many hours later than originally planned. We thought this would be the last of our problems but were sadly mistaken. It took us 2 hours to exit the airport with a car (which was NOT a Mustang, I’m pained to report – we had to settle for what was left due to being so late. I must write and thank US Airways!) and we headed out onto the highway confident that the GPS would take us to our B&B in the north east district of the city. Unfortunately, our intended junction off the highway was closed and the GPS just kept taking us round and round in circles for a good hour. We were a little fed up by now and very tired (and maybe a little grumpy – Rachel that is!) and resorted to calling Sergio, our host, to guide us in, which he did with great patience and encouragement as we were supposed to arrive about 6 hours earlier. I almost threw my arms around him when we arrived, but managed to control myself – just! We crashed into bed about 1am on Sunday morning.

Sunday turned out to be Miami Beach day. We had deliberately planned nothing in advance so we could just do what we fancied at the time. And what we fancied at the time turned out to be beach, bar, restaurant, beach, bar, beach etc etc – you get the picture! Miami Beach turned out to be nothing and everything we had imagined, all at the same time. The beaches lie along a sliver of land adjacent to the bay-side waterways in the north east district called the Intercoastal Waterway. The A1A Collins Ave runs all the way to the end. We headed along this avenue after breakfast at Jimmy’s Diner on the Biscayne Boulevard right next to where we were staying. It was a jaw dropping experience to see what can only be described as mansions along the waterway, each mansion having its own yacht costing several times what my house is worth. Very expensive cars paraded along the avenue populated by bronzed beefcakes (and I’m not referring to me in case you were wondering) with the obligatory blonde bombshell in the passenger seat (and, no, I’m not referring to…. Well you knew that anyway !!!). Rap music seemed to scream from every car. We entered the Art Deco district of the city. It was like being in Disney’s Hollywood Studios, only for real! Ocean Drive is the “Main St” of the district with numerous symmetrical structures sporting stepped roof-lines, porthole windows and lovely curved edges and corners. And all very colourful too. 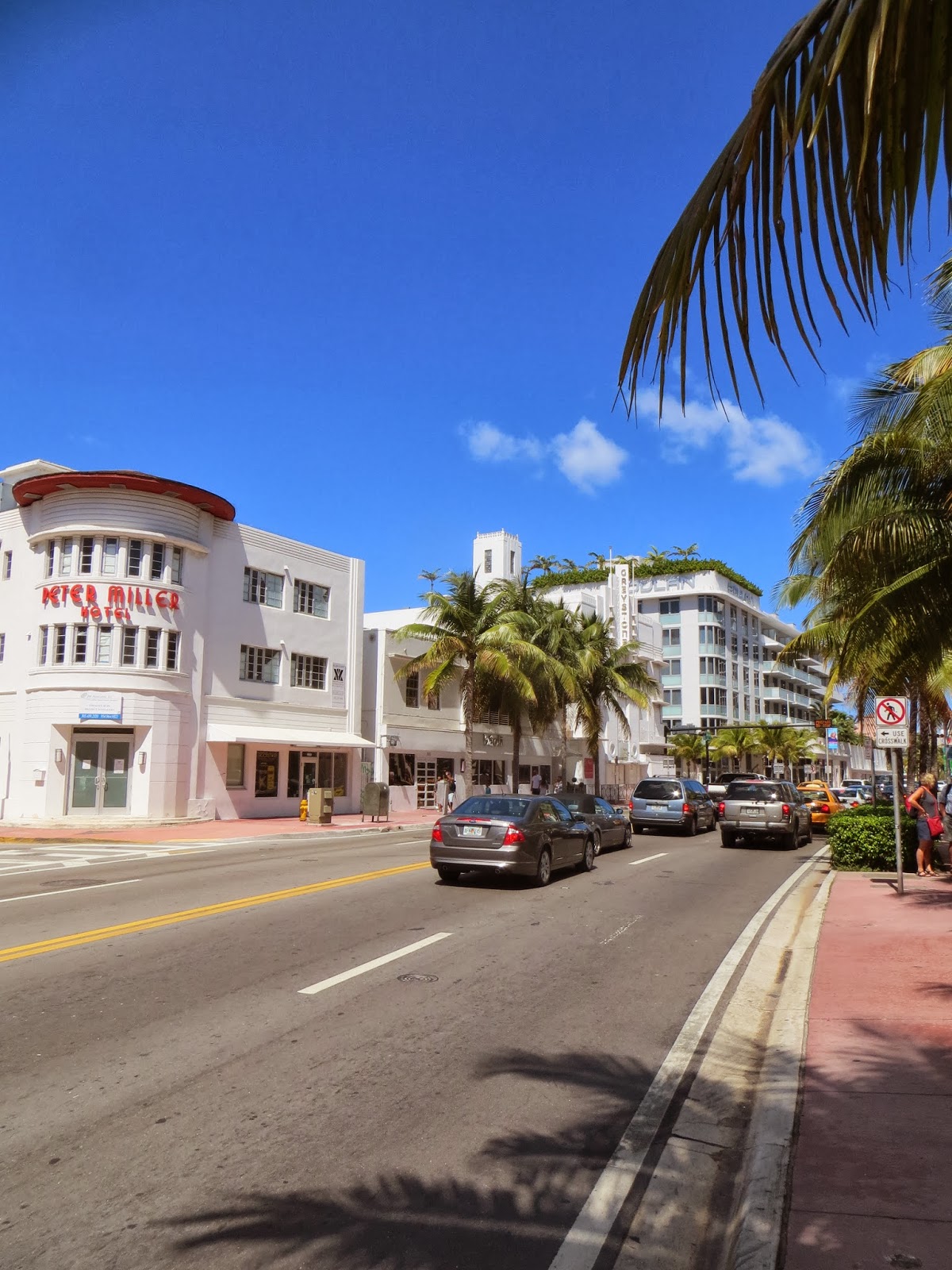 The bars and restaurants were spilling out onto the streets, even this early in the morning. And music of a South American flavour filled the air, often drowned out by Rap from a passing car. We headed straight to the beach. These are some of the best beaches we’ve seen in the States: wide and white against the blue-green sea. We walked for a while before settling down under the sun. 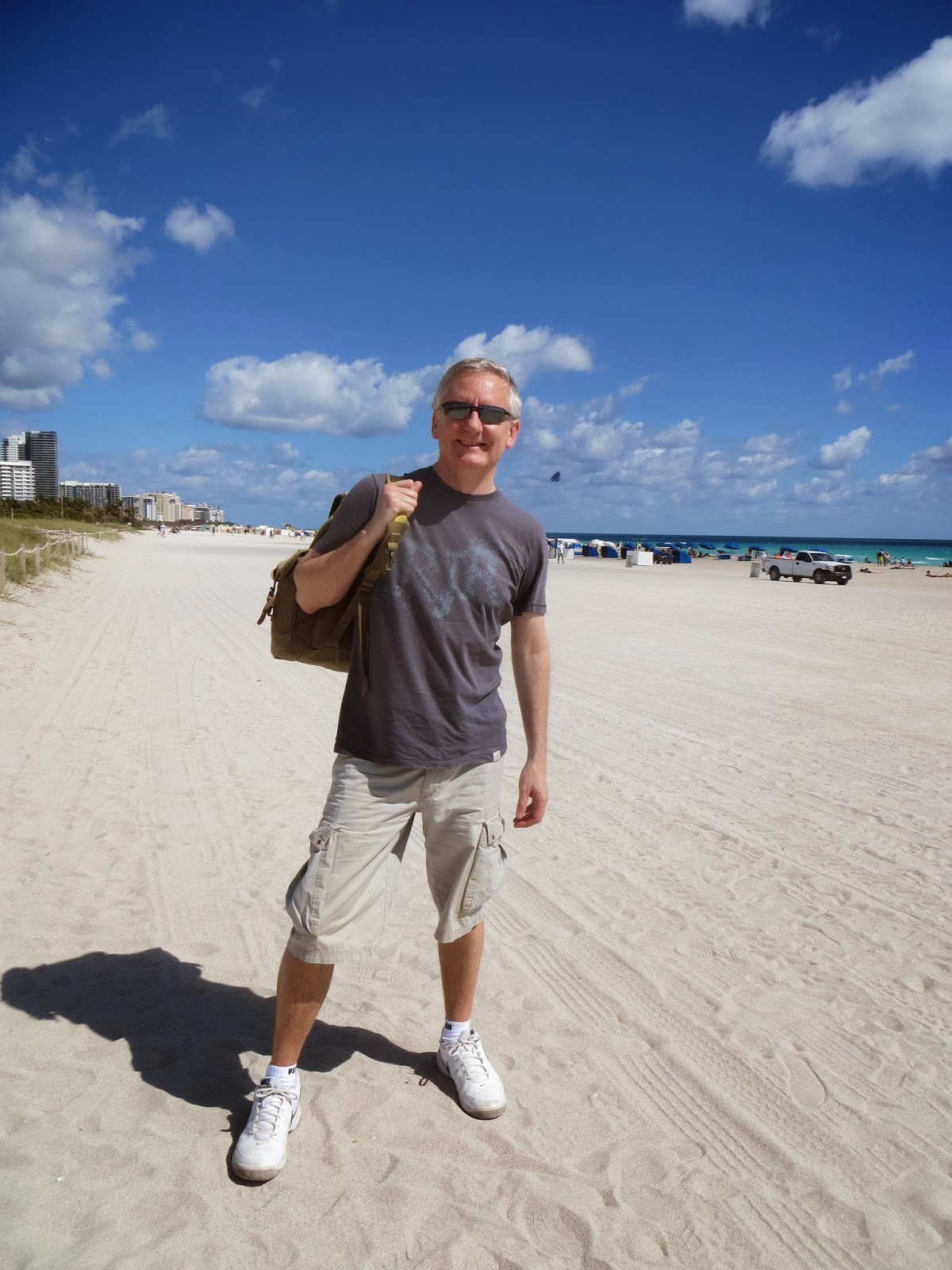 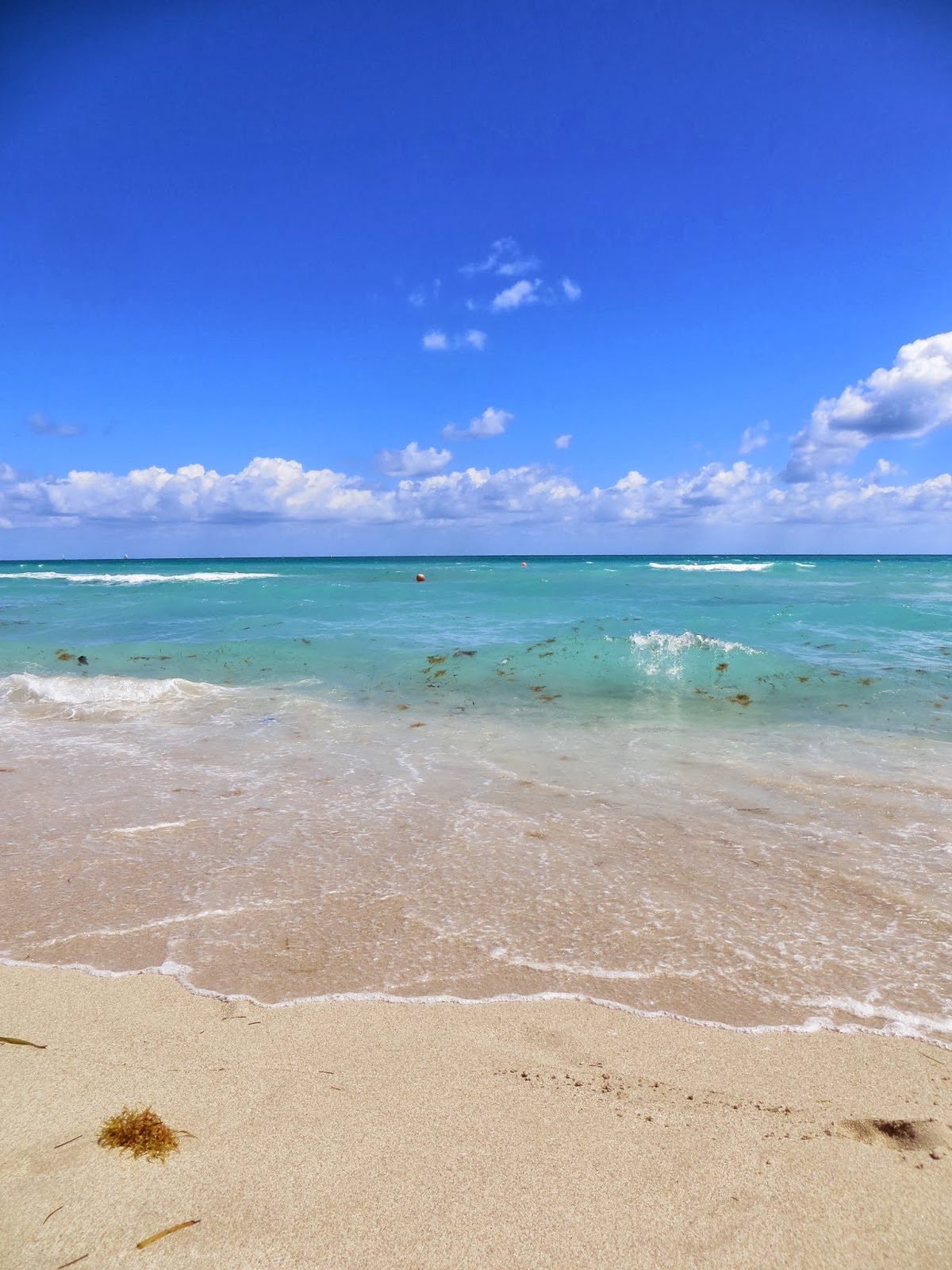 And this brings me to the people. The north beach area is different from the south. The North is populated by fewer people and it’s much quieter. The south is thronged by thousands upon thousands of the body beautiful. It’s a sober reminder of his mortality to a 50 year old and we must have stuck out like a sore thumb. Most of the ‘guys’ looked steroid injected or they spent 4 hours a day in the gym 7 days a week (or both). The women were sculptured, with extremely pert, gravity defying body parts, and resembled a honey pot; attracting attention from the male multitude (not me, of course – I hardly noticed). The men displayed their alpha status by performing push-ups, pull-ups, sit-ups and other power displays while the women looked on; and I wondered… Is this all they have in life? 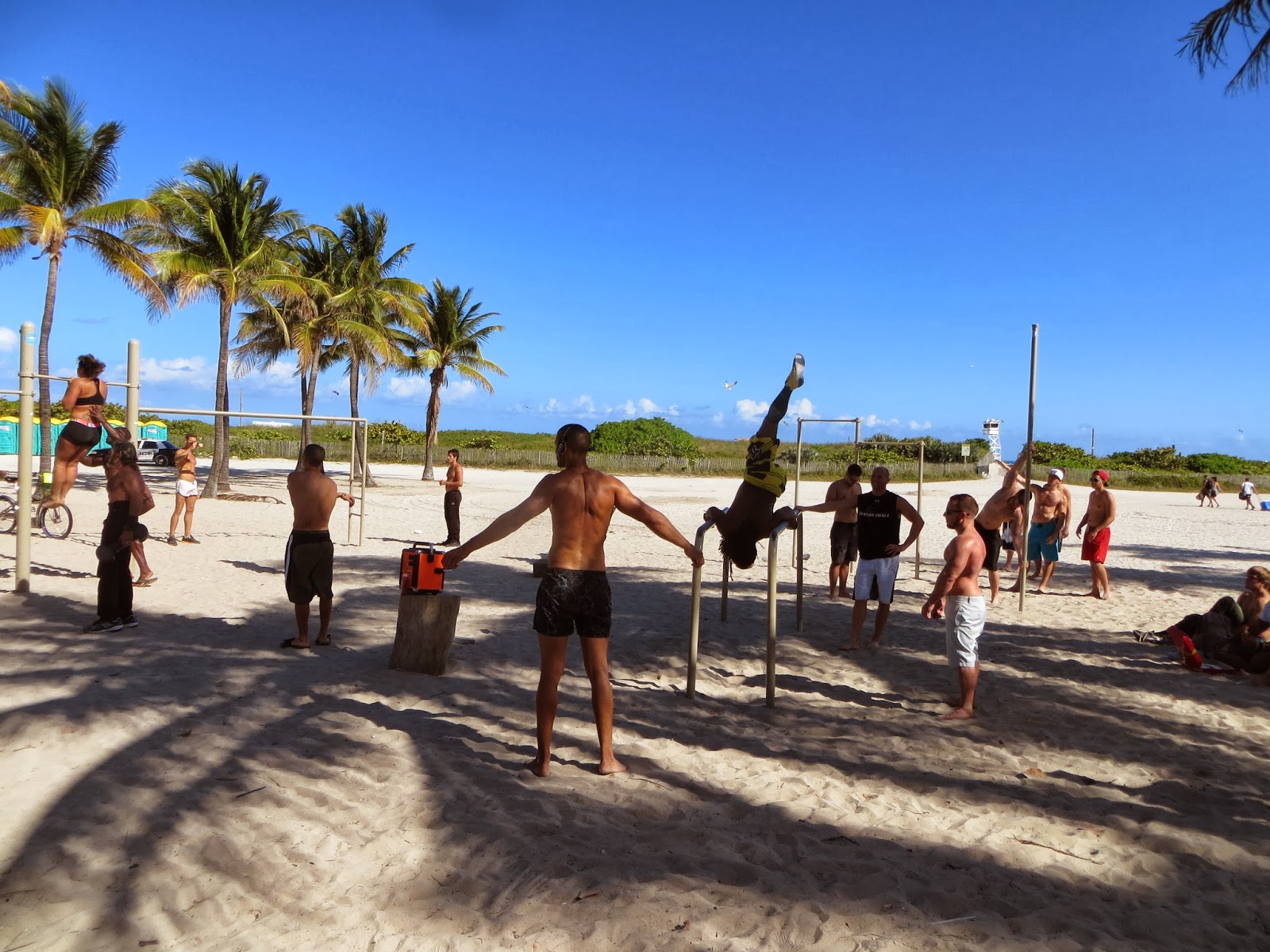 I got the impression that it defined them somehow, which made me wonder what they would do in 20 or 30 years time. Well, some of them, as far as I could see, buy skate boards or roller skates and glide up and down the streets listening to music through very large headphones. Am I beginning to sound like a 50 year old? Others ride bikes with huge speakers lashed to the back, the sort of free standing speakers you would have in your front room. There was something absurd about the whole thing. But one thing united them all: the impression that today was everything and tomorrow would take care of itself.

Anyway, it was all a bit much for us oldies, so we headed for the bar! 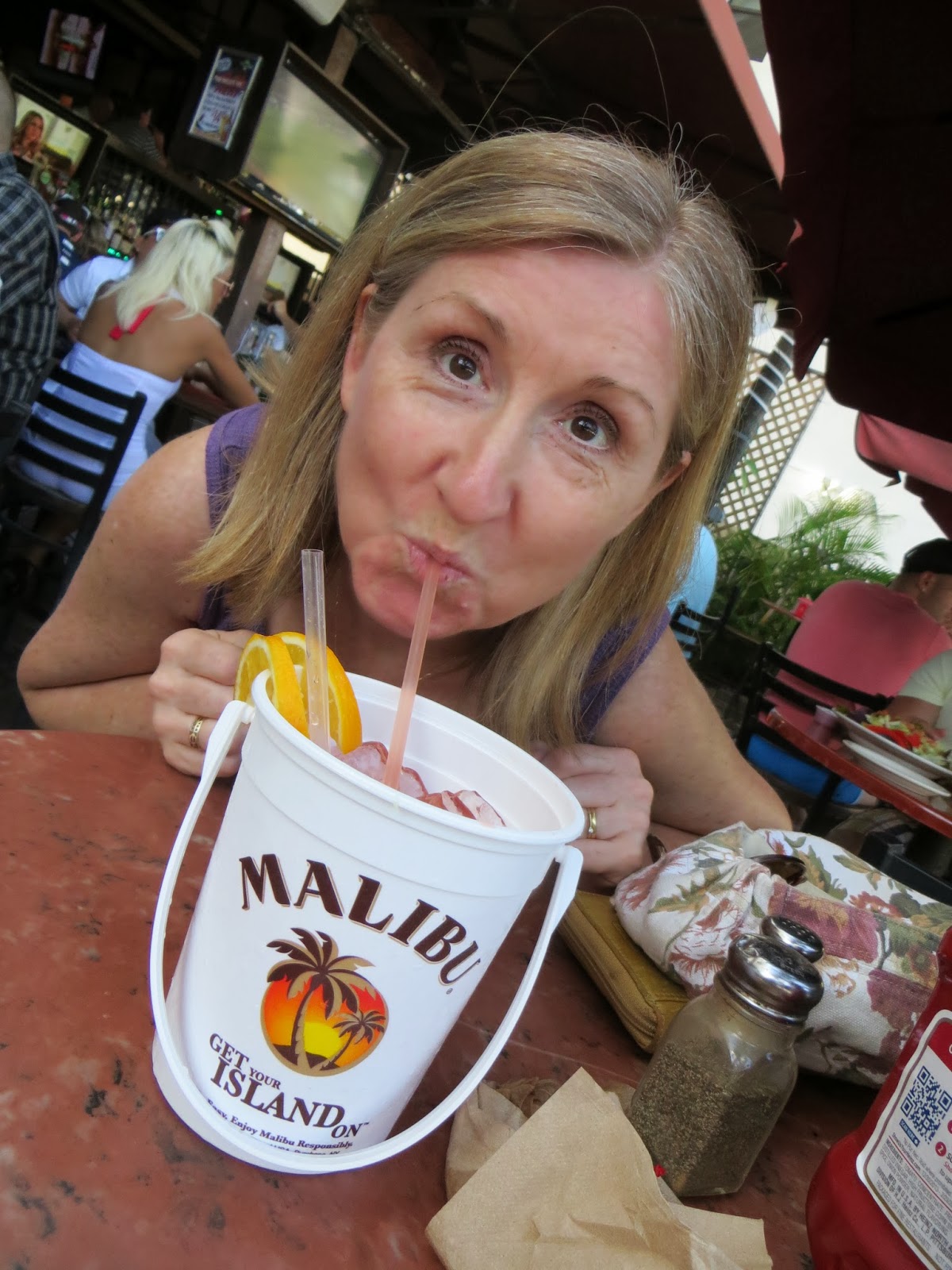