Our plan today was to complete the 100 mile (approx) return trip along the ‘Going To The Sun Road’ from West Glacier to St Mary; a journey that spans the width of the national park. This would allow us to get a feel for the place and enable us to plan our activities while we are here. It was another beautiful clear and cool morning when we entered the park, paying our $25 fee for the 7 day pass. We had decided on a walk from the half way point of Logan Pass but a ranger at the visitor centre warned us that we would have to hurry if we were to park at Logan Pass, as the car park is usually full well before lunch time. So we set off immediately. But it was impossible to avoid stopping again and again to look at the stunning views on display. Meanwhile the volume of traffic was building up and with a 25 mph to 35 mph speed limit in force the journey took on epic proportions. At nearly every ‘turnout’ we had to compete for parking spaces just to take a few photos before moving on. It began to feel like one long traffic jam, and with road works thrown in for good measure I, for one, began to feel a little frustrated. The lesson we have learned here is to pick your destination and set off as early as possible if you want to avoid these delays.

The ‘Going To The Sun Road’ is the main attraction in the park and it rises inexorably until it reaches the half way point of Logan Pass and its visitor centre. From there onwards it’s all downhill.  The further you go the better the scenery gets. Probably the most impressive views come at or around The Loop; a switchback in the road, which all books and magazines warn will be stomach churning at best and anxiety inducing at worst. When we reached The Loop we wondered what all the fuss was about as we stopped to gaze upon Heaven’s Peak. However, within minutes of resuming our journey my knuckles were white with gripping the steering wheel so tightly! Here’s Heaven’s Peak: 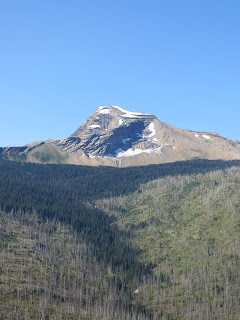 During the winter this road is completely cut off but snow ploughs have to battle to remove the many feet of snow so that the road can be opened again for the next summer season. I think the next photo shows something of the splendour of the place: 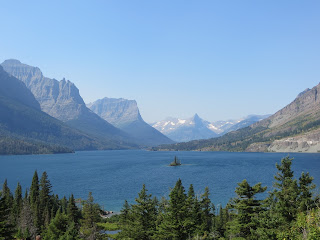 I have to admit that it was a relief to reach St Mary’s Lake at the far side of the park, after two hours driving. We noticed a sign advertising boating trips on the lake and we jumped at the opportunity to escape the traffic if nothing else. This turned out to be the best decision we made as the trip along the lake was tranquil and awe inspiring. 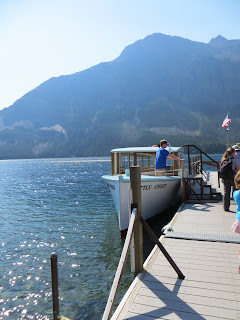 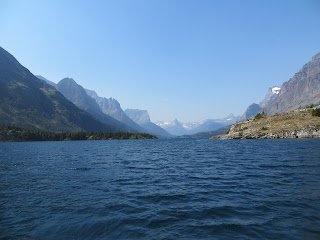 We saw rock formations that were billions of years old and glaciers that are still carving out the valleys. At the half way point of our trip, as we stopped for a short walk we saw another moose wallowing in the shallows and cooling off in the heat of the day. I thought of pinching myself just to make sure I wasn’t dreaming.

Here’s the view from where we sat waiting to board the boat again for the return trip: 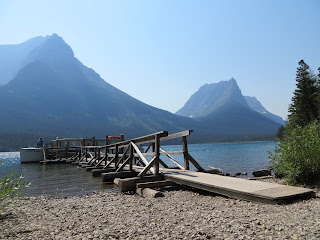 Returning to the start point we sat at the edge of the lake and ate our packed lunch of salad and Tuna and appreciated this towering cathedral of ancient rock.

On returning to Logan Pass we topped up our water supplies and headed out on a walk to Hidden Lake. 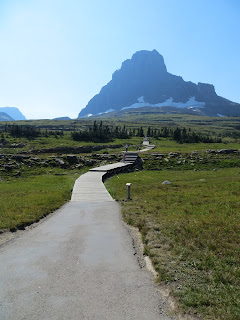 By now it was very warm; almost 90 degrees and the altitude made the initial ascent hard going. But it was worth the effort. 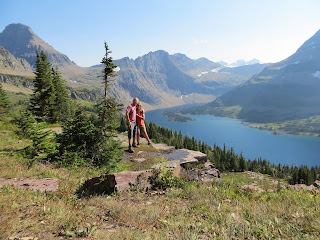 We had read that mountain goats are very friendly and placid, which turned out to be a relief as we encountered a number of them along the way, one of which was stood in the middle of the path without any inclination to move. 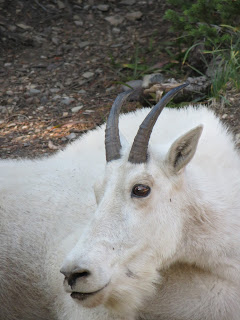 We got chatting to a woman from Seattle on the way back and exchanged stories of our adventures in the US and UK. We exchanged email addresses and promised to pop in if we are ever in Seattle. She actually grew up in Montana and knew the region well and suggested a 16 mile walk along Garden Wall. We nodded politely, knowing full well that a 16 mile walk was not going to happen!

It felt like a long drive back as we were really tired by this point. We  had planned a BBQ for the evening but it was already late. We arrived home and headed straight out into the garden and fired up the grill; we ate perfectly cooked (although I say so myself) chicken in garlic and paprika, with salad and a little too much wine. But the wine was a gold medal winner so what was I to do?

During our BBQ we chatted to our host and suddenly, out of the trees came a doe (…a deer,  a female deer..) with its fawn. They slowly made their way onto the lawn area and the doe started picking apples from the trees while the fawn fed from its mother. They were only a few feet away and were quite contented and unafraid. 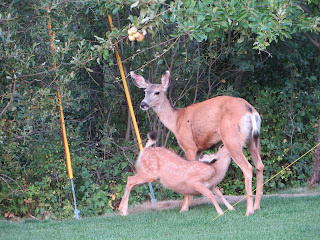 It was a lovely end to another wonderful day.