After a breakfast of eggs, sausage, waffles and fruit (God Bless America) we jumped back onto Interstate 15 and headed north. It was another beautiful, sunny morning and the air had that cool, fresh smell you get from the grass after the early morning sprinklers have been on. If you’ve been to the US you’ll know what I mean. The scenery today was much more diverse than yesterdays fields of gold; mountains, forests, rivers and interesting little towns punctuated our route. Helena, the capital, was a sprawling, modern city with very expensive looking houses and its streets were clean and pristine as we’ve come to expect. We left the Interstate here and joined Highway 141 at the edge of the Helena National Forest. Towns like Helmville and Ovando drifted by and scenes from The Wicker Man entered our minds! The populations of some of the towns we passed must have remained in double figures but there seemed to be a disproportionate number of churches. Onto Highway 83 and the lower reaches of the Rocky Mountains provided the most dramatic scenery; it was a privilege to experience it. Some of the smaller lakes reminded us of Windermere in the UK’s Lake District;  the main difference being the real sense of being at a high altitude and a stark remoteness. Petrol  stations are very few and far between here and we filled our tank whenever we got the chance. We realised we were ill prepared if the car broke down as we had very little water or food. We won’t make that mistake again.

Upon reaching an area known as Flathead, with its fantastic blue lake (Flathead Lake) we knew we were not far from our destination. Log cabins with their own jetties onto the lake were dotted about the lake side; an idyllic location by any standards and we made a mental note for a potential future holiday.

We reached a town called Hungry Horse at around 2:30pm and called our host for directions. We arrived 15 minutes later and was met by a very friendly man who showed us around our accommodation. Our first thought was ‘is this really all for us?’. We are now staying in an extremely large log cabin – unbelievably solid and very beautiful. It’s right on the edge of Glacier National  Park. It is set in its own grounds with a lovely patio and veranda and a view of the mountains  within the park itself. Every so often we can hear the sound of a train at a nearby level crossing; it makes the sound of the train in Casey Jones – the children’s Western series from the 50’s. It gives a real sense of authenticity to the place. The bed seems to be made of tree trunks bolted together and stands about 3 feet from the ground. Rachel will need a ladder to climb in! Here are a few photos of the cabin: 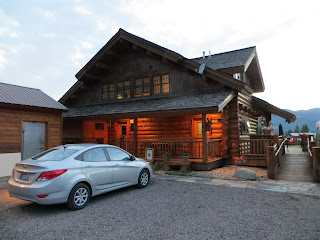 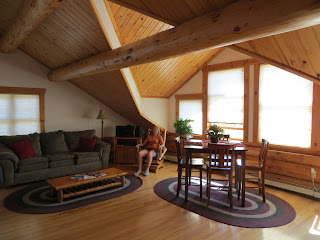 We ate out at a local restaurant called the Glacier Grill, which our host recommended.  It was one of those places you walk into and, because it is simple with no frills of any kind, expect the food to be poor. But we have been to the States enough times now to know that the opposite is in fact usually true. These are people with nothing to prove;  they cook great, fresh food with a smile. It’s what you come to expect here. The Glacier Grill did not disappoint. Rachel ate the most wonderful steak sandwich and I had salad. I bought a beer and when I  was almost finished the waitress offered me a refill and took my almost empty glass away. Minutes later she returned with a full glass of beer. When we got the bill we realised that this was a free refill. I’ve never seen free beer refills before in my life – only in America?

On the way back to the cabin we visited a local market to stock up on essentials but had noticed a small shed (that’s the only way I can describe it) at the side of the road selling fruit. 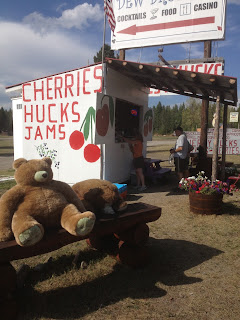 Rachel was adamant that she wanted to buy Huckleberries,  which are advertised all over these parts. They are like little blueberries and taste sweet and remind me of perfume. I’m reminded of Huckleberry Finn and Huckleberry Hound – I guess you have to be a certain age to know what I’m talking about. Anyway, we visited the shed and there was an old cowboy sat in front of it when we arrived and he greeted us with a “howdy”. He gave us samples of his fruit to taste before we bought any and we settled on Huckleberries and cherries. We enjoyed them on the patio later on. 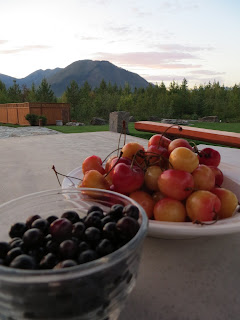 It is much cooler here at night than in Teton but we sat outside while the sun went down over the mountains. A nice end to a lovely day.