Day 2 didn’t start off as planned. We wanted to ride the Old Town Trolley around the city to get a feel of the place. However, someone lost the information map (Me! (Andy)) somewhere near the White House, which meant us wandering around for what seemed like hours (actually only an hour or so) trying to locate the Trolley stop. We asked numerous times but always ended up in the wrong place. If you are every in Washsington looking for the Old Town Trolley, don’t rely on signs (there are virtually none) – just head straight for the corner of E Street NW and 10th. The Welcome Centre is right there, where you can buy tickets and get on the Trolley. The Orange route is by far the best, taking you to all the main sights.Our first stop was the White House (before we found the Trolley). It’s a little more ‘ordinary’ than expected and you can’t get very close, for obvious reasons. I’ve never seen so much security in one place, and that’s the security you can actually see. By all accounts there’s much more that you don’t even see! Barracades, Dogs, Police, cameras, not to mention a thick ring of Japenese tourists with cameras! There’s an exclusion zone around it, which is a little frustrating. 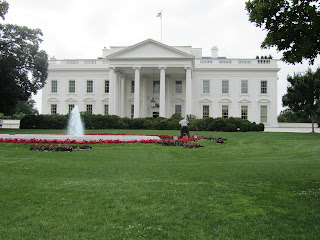 Once on the Trolley, we enjoyed the main sights and were struck the beauty and variety of the architecture. One amazing building after another, many evoking memories of Rome: towering columns and dazzling white marble. We passed through a maze of museums, all works of art in their own right. We’ll visit some of them tomorrow. We even saw a street named after my dad: 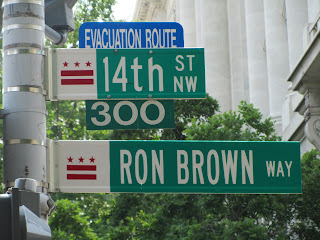 The US Capitol building was one of the most imposing buildings: 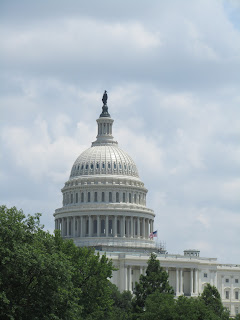 But one of the best moments of the day came when we saw the Thomas Jefferson Memorial. We wondered how one man could invoke such admiration and deserve what is one of the best places to be in DC. But when you think the third president of the United States was the author of the Declaration of Independence, a founding father, an advocate of equal rights and democracy, the separation of Church and State, as well as being an architect, scientist, writer, musician and inventor – you have to say this is a fitting place for such a man. Set on the shore of the Tidal Basin with a view of the Washington Monument, it’s a peaceful place to sit and ponder. It’s a perfect structure and gives pleasure just to look at it. It was hard to drag ourselves away. 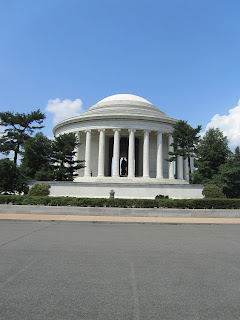 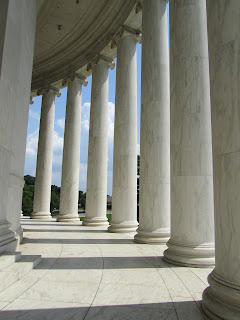 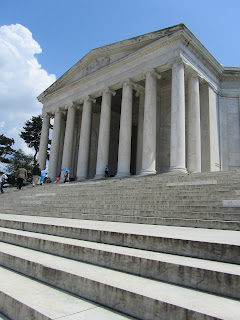 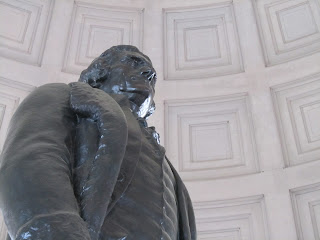 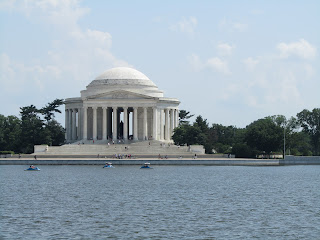 Next onto the Washington Monument: 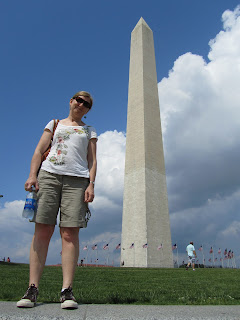 Then WW2 Memorial and the second best monument of all – the Lincoln Memorial: Another Roman-style temple in honor of a great man but far too crowded, which was a shame. 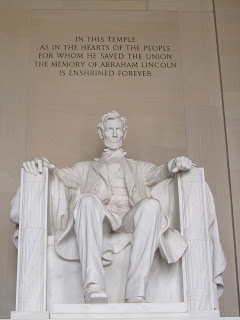 Our final stop of the day was the Arlington National Cemetary, just across the Potomac River. An amazing and humbling place. The sight of thousands of identical gravestones, each with an American flag stuck in the ground beside it made us stand and stare for ages. We watched the changing of the guard at the Tomb of The Unknown Solidier: a precision spectacle that works like clockwork every half hour precicely. The signs dotted about the cemetery read ‘Silence and Respect’. 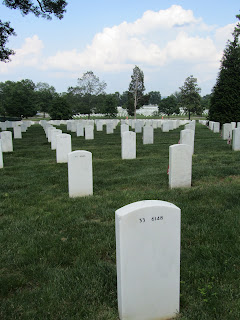 We took the Metro back to the hotel, crashed out and slept for 2 hours before going out to eat. It’s now 1am (6am in the UK). Rachel is asleep while I complete our blog for the day (I think there’s a pattern emerging here!!).

Tomorrow, after visiting the museums, we head for Chicago by train.