Today we set the alarm clock for an early start as it was to take an hour to get to the north rim of the Grand Canyon and we wanted to make sure we could park the RV. On the way we realised that we had moved over into another time zone here in the Kaibab region and was now eight hours behind the UK, not seven. It also meant that we were even earlier than we had thought and when we reached the entrance of the national park they were only just opening. We were one of the first in, apart from the people staying at the Grand Canyon Lodge or Campground.

For our whole journey we had been surrounded by tall pine trees and passed through beautiful rolling meadows, having had to brake for deer crossing the road several times. We were excited about seeing the Grand Canyon again and this time it was to be from the north rim, not the south.

We were not disappointed. After a brief time at the Visitors Centre we walked to Bright Angel Point for the first of many unbelievable views. We had forgotten just how high it was and our stomachs churned as we walked the narrow path to the view point. 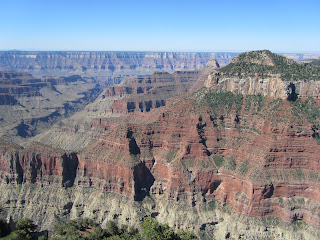 From our vantage point we could see where we had been previously with the children five years ago on the south rim. It was eleven miles across the canyon but, with binoculars, we could even see the lodge and the trail we took back then. Also in view was the south rim airport and helicopters and planes continually flew over the canyon from there. Unfortunately the Colorado River was not visible from this point but we knew it was there, thousands of feet down in the valley.

We headed for our next walk along Transept Trail but stopped off at the lodge for a drink. There are fabulous balcony areas overlooking the canyon and we sat on two reclining wooden chairs to drink and admire the view. As is usually the case we got chatting to a couple next to us. They were friends who had met at the Grand Canyon 40 years ago and had returned on a nostalgic trip. The man wasn’t her husband either – her husband was at home. But her friend seemd to be decidedly gay so her busband was not out of his mind after all!!

Another couple we spoke to had met here aged 15 and 17 and dated each other 50 years ago and then had gone their separate ways, married other people and had children etc. Then, three months ago the woman had recognised the man on Match.com (dating website for those of you who don’t know) and they got together again after all these years. They were now back where it all started to relive their first times together. How amazing is that? Not even Rachel could bring herself to ask what happened to their first marriages!

We completed the Transept Trail and then headed for the salloon. The Grand Canyon Pilsner tasted so good and Rachel pushed the boat out with a coffee. We rested for quite some time and didn’t want to leave as it was a really laid back, friendly place to sit and relax. But later we set off in the RV to cross the Kaibab Plateau and then the Walhalla Plateau to get to Cape Royal (nearly 8000ft). Considering we used to be worried about driving the RV to the nearest supermarket we did pretty well taking it along the edge of the canyon on very narrow and twisty roads. The journey was well worth the effort as we were rewarded with the most amazing and scary views we have ever seen. We stopped off at every viewing point on the way back to experience just a little more of the canyon. Overall we have seen only the tiniest fraction of it today. It is truely enormous. We concluded that we enjoyed the north rim more than the south, for the sheer variety of views and walks. 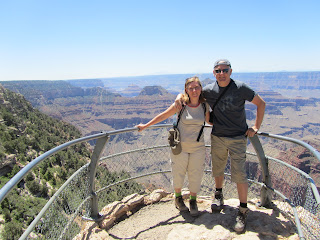 We headed back to Jacob Lake and stopped for dinner at the lodge. Rachel enjoyed slow oven-baked chicken and vegetables and I had Trout for the first time. Lovely!

We have now adjusted our time for the second time today so that we are sure to get to Zion tomorrow at the right time. We will be back to 7 hours behind the UK when we arrive in Zion.

Today was a really good day and we were out for 14 hours. Time for bed!