The journey from Zion to Las Vegas was uneventful and a little monotonous along Interstate 15, across unchanging desert for the most part. However, as we approached Las Vegas the increase in the number of electicity pylons was really noticeable. It was as if all the pylons led to Vegas. We actually dropped the RV off at Boulder, just on the outskirts of the city and it was quite sad seeing it go. We had grown attached to our RV over the past 2 weeks. We took a taxi into Vegas and the Monte Carlo Hotel on The Strip. 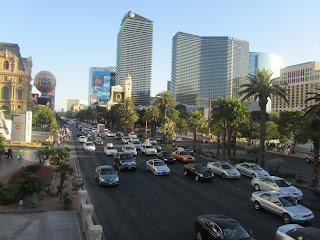 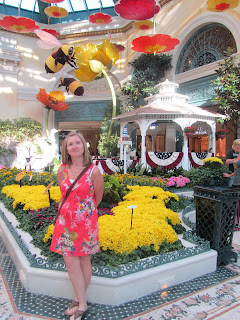 After checking in and unpacking we headed out into the heat (it had been 111 degrees in Boulder and it felt the same in Vegas). We wandered around for what seemed like hours popping in and out of the hotels and shops and watched the fountain display outside the Bellagio hotel. Before long the city’s relentless in-your-face assault on the senses nearly sent us crazy so we went to the Rock Bar and had dinner. Later we headed to ‘Toby Keith’s I Love This Bar’, where there was a  great County/Rock band playing. We ended up staying there and danced until nearly 3am before crashing into bed at about 3:30am. 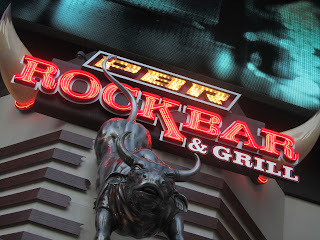 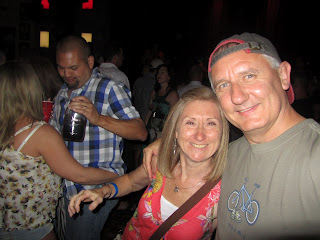 We didn’t set the alarm so woke up late this morning and eventually headed out to Denny’s for breakfast – a very big one! By then it was almost lunch time. We picked up  some tickets for the Cirque du Soleil’s Elvis. By then, the heat was getting to us so we sat around the hotel pool drinking cocktails until about 5pm, before getting ready to go out to the theatre.

The Cirque du Soleil production of Elvis was great: some amazing acrobatics and great Elvis music. We ate at the Hard Rock Cafe, which is just across the road from the hotel. 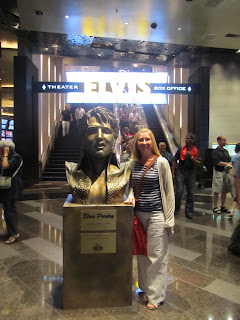 Now, back at the hotel, we have had just about as much of Las Vegas as we can stand. So it’s off to bed. But not before I finish this blog. Tomorrow we have a six and a half hour drive into California. But this time it’s in a car and not an RV.

Next blog will be from Solvang.