We are on the final stage of our Deep South road trip. The journey from New Orleans took a lot longer than we expected due to taking a detour at Pensacola onto the coast road, hoping for a long drive along the very edge of the Gulf. Unfortunately, most of this road is set back from the sea and all we saw for most of the way was the back of another car or truck. The traffic was extremely heavy and once we were on this road there was no leaving it. We had to sit it out. So we arrived in Panama City Beach about 5pm after setting off from New Orleans about 10am. We had travelled through the state of Alabama and into Florida.

We were greeted by our hosts Rick and Lee and shown into our new home for the next few days. They have owned this place for over 40 years and gradually transformed a very small space into a much extended, three floor beach house. We were shown through to the back and up some steps onto the first floor deck: 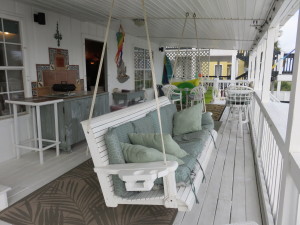 We knew straight away that we would spend very little time away from here as we felt at home right away. Next, into the main living area, which resembled a timber hut where all the fixtures and fittings seemed to be hastily cobbled together, giving it a certain charm. 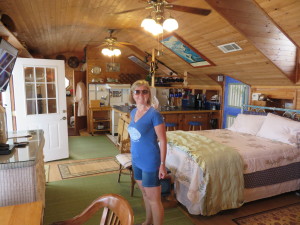 Here’s a photo of the house from the beach: 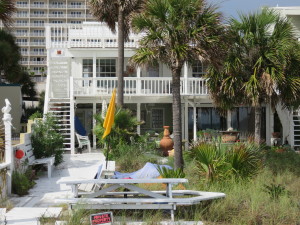 Rick and Lee retired here in the mid 1990’s after travelling the world together teaching for most of their married lives. Rick must be in his 70’s and spends his days kite surfing, kayaking or sailing his small catamaran , which sits just outside the house on the edge of the surf. Rick and Lee are certainly living the life! Here’s a photo of Rick pottering about his garden, which is really simply the natural sand dunes outside the house.

So our days here have been spent sitting on the deck reading, sleeping, chatting and eating punctuated by walks along the beach or swimming in the sea. We’ve enjoyed getting up early in the morning and going from our bed straight into the sea only 30 seconds walk down the garden boardwalk. Here the reality really does live up to the fantasy and Rick is living proof that age is not only physical but also a state of mind! Yesterday we were splashing about in the surf and suddenly there was Rick rocketing past us on his kite surf, hanging on with one hand while trying to ‘high-five’ Rachel with the other. In the UK he would have been cautioned for dangerous driving but here no-one cares about such things.

We’ve had a couple of storms over the last couple of days but they only last a few minutes. The first thing you notice is a strengthening of the breeze and a darkening of the skies from the west. People here know what’s coming and begin to run from the beach before the storm hits. A thick smudge of cloud approaches and you can see the rain falling from beneath as it moves across the sea. We gather all the loose objects from the deck as the palm trees right outside the house begin to bend and drops of rain begin to fall heavily onto the roof and enter the decking area with the wind. Then, from inside the house you can hear the wind howl wildly and hear the shouts from those outside who have been too slow to leave the beach. Umbrellas and trash cans go tumbling down the beach and the whole chaotic scene lasts only a few minutes before skies clear, sun returns and the wind is gone.

On the top floor there is a sun deck with great views down the beach:

On our last night we made the mistake of going out to eat. Until then we had eaten out only on the deck and used the BBQ to cook steaks and chicken. As soon as we left the house we were in one long traffic jam. We had set the GPS to take us to a Longhorn Steak House and when we got there found that it no longer existed. There were young kids on motor bikes and scooters rushing around, helmet-free, in large groups blowing horns, shouting and weaving in and out of traffic. In fact, all we could hear were motor bikes, horns, shouting and screaming. It resembled something out of Grand Theft Auto for those of you out there who know something about video games. We had been blissfully unaware of what was going on outside of our quiet little existence in the beach house. We decided to head back towards home but couldn’t find a restaurant we liked or that had room. We stopped for gas ready for our journey to the airport the next day and found ourselves in a queue behind about 20 bikes carrying shouting and screaming kids. By the time we got to the pump the gas had all gone! By now our mood was a little bleak to say the least so we drove straight home and pulled up outside the house with a huge sigh of relief about an hour after we had set off. We had still not eaten and had no food in the house so we decided to walk to Walmart and buy our steaks from there. By the time we had got the food and walked back it was about 10pm but we threw the steaks onto the BBQ anyway and spent the rest of the evening on the deck trying to forget the carnage going on outside.

While we have been here we have had plenty of time to reflect on our journey through eight states. Our highlights were listening to Blues in the Bluebird Café in Nashville, Graceland in Memphis and the whole crazy New Orleans experience. These were topped and tailed by the gentle beauty of the Smoky Mountains and the relaxation of the beach. For all the glories of our little beach house we will not be returning to Panama City Beach! But it’s been another great road trip and we are already thinking about the next.

So this ends our Deep South road trip. Until next time – so long y’all! 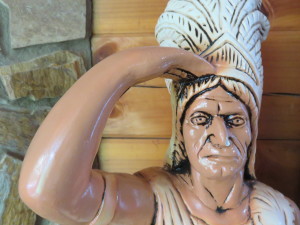