Batter’d & Fried is a quirky looking chicken and fish restaurant (or ‘joint’) just a few blocks from where we are now living in an upmarket residential area just two miles outside the city, called East Nashville. I mention it, not because we ate there, but because it describes exactly how we feel at this moment! We’ve walked miles and the heat in Nashville is staggering, feeling much warmer than in the Smokies and after being in a wilderness the city is quite a change for the senses.

The journey from our lovely log cabin in the Smoky Mountains to Nashville took us about 6 hours with a stop and took us through remote country via lesser used highways. Rain storms slowed our pace to a crawl at times. We passed through many small towns that looked like nothing more than a collection of shabby farmsteads and timber houses in need of a lick of paint; some with old disused trucks resting forlornly in weedy patches of garden. In each town, in the midst of the shabby charm, sat a pristine church building in manicured grounds, its blindingly white timber rising to a long slender, pointed spire. It was like this for hour upon hour as we made our way north and west out of North Carolina and deep into Tennessee.

We’ve done enough travelling to be used to time zone changes but this was the first time, as far as I can recall, that we’ve driven through one, although we may have passed through an Indian reservation in Arizona once that kept to its own time zone regardless of what the rest of the country was doing. We were reminded of this change by the cashier at a gas station where we stopped to fill up. When the moment came and we passed a sign stating that we were now entering Central Time our phones and GPS, within only a few seconds of passing the sign, set themselves back an hour. It was a strange feeling. A few seconds ago, according to our GPS, we still had an hour left of our journey; now we had two! So time travel is possible after all.

Our approach to Nashville was pretty exciting, especially for Rachel as she’s a big country music fan. Billboards were full of famous faces and TV stars as the city skyline loomed larger against the cloudy sky. 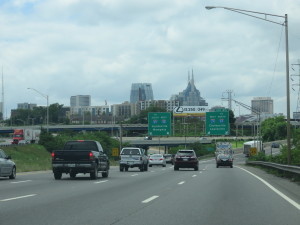 As we circled around the south-east section of the city the famous and familiar ‘Bat Man’ building stood out from the crowd. This is really the AT&T building but looks like something from Gotham City. 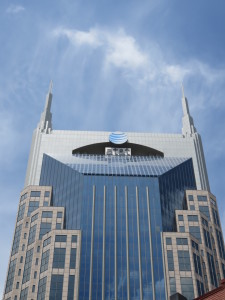 Our apartment for this part of our trip was a converted garage in the back garden of an expensive looking house in an ordinary residential street. In stark contrast to the cabin in the Smokies this place is ultra-modern and perfect for a few nights. 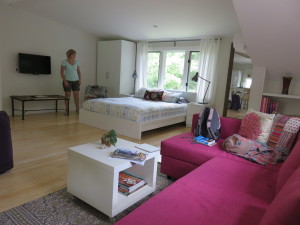 After a short rest we were out again, heading for one of the highlights of our trip – The Grand Ole Opry – the spiritual (and actual) home of country music. The entrance to our flat is via the back ‘alley way’ that runs along the back of the houses in the street. As we neared the end of the alley we could see a group of people gathered around something, making a lot of noise. I admit that I felt a little uneasy as we approached them. But instead of being confronted by a gun in the face we were greeted by seven or eight smiling and very welcoming faces (local boys and girls).

“Hey, how’s it going?” said a young man in his early twenties.

He held a hose in his hand and was eagerly spraying water into a three foot high metal barrel while his laughing friends looked on. They invited us to look into the barrel, where countless Crawfish, Shrimp and other goodies were writhing and crawling. We chatted long enough to find out that they intended to boil them alive, pop open a few beers and enjoy the sun together in the garden behind the fence. We politely declined the offer to join them and headed out onto the street. We took a taxi, but no ordinary taxi. This was the first time we had used Uber, a taxi service with a difference. It’s like Air B&B but for rides instead of a place to stay. We had logged on to the Uber web site, registered and then booked a ride online. We were instantly told that Jarrett was on his way and would be with us in 5 minutes. We had his photograph and a picture of the car he would be driving. Within 3 minutes we received a call from Jarrett, who told us he was almost here and sure enough he turned up on time. Jarrett is not a regular taxi driver and his car is not a taxi. He told us that he’s an electrician and becomes an Uber driver only at weekends to pay for his ‘drinking money’. We chatted about how Uber works and about Nashville and music all the way to our destination. No money is exchanged as it’s all taken care of via the Uber account. Jarrett says he likes not having to carry cash with him and we like not having to pay. The cost is much less than a regular taxi in Nashville so everyone wins; apart from real taxi drivers whose business is being taken away by Uber. But that’s Capitalism for you!

The Grand Ole Opry, founded in 1925, is a weekly country music stage concert which broadcasts live on WSM radio. The biggest stars in Country Music have played here. In fact, you know you’ve made it in Country Music when you are invited to play at the Opry. Now we have to confess that our expectations of the Opry had been set by the TV series called Nashville and we were eagerly expecting contemporary Country stars to rock our socks off! The reality was quite different; with very few performers under the age of about 70, these were the megastars of old and we knew none of them. Instead of electric guitars, thrumming bass and thudding drums we had banjo and fiddle and a Bluegrass master class of the highest order, if the crowd’s cheering was anything to go by. The host of the evening, because the whole thing was going out live on WSM radio, had to repeatedly read a script full of adverts for Dollar General and Cracker Barrel, which on the one hand was a novelty but on the other hand damned annoying! It’s only since going to the Opry have we learned to appreciate the calibre of the performers. These were people who made Country music what it is today and you wouldn’t believe the following they still have in this part of the world. Lesson learned! 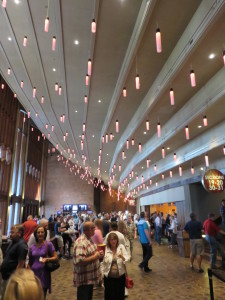 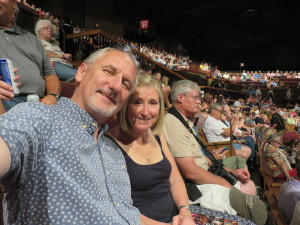 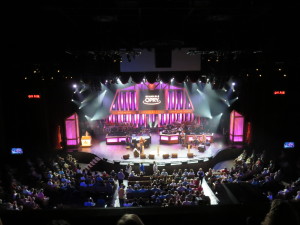 Next day we walked into the city and spent the day exploring. We visited the Ryman Auditorium,  once the home of the Grand Ole Opry… 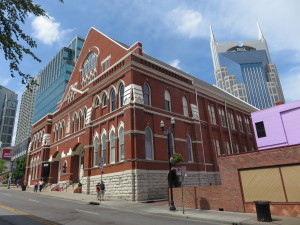 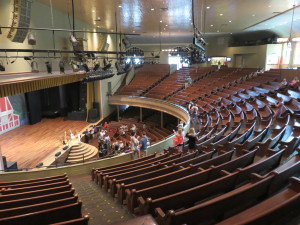 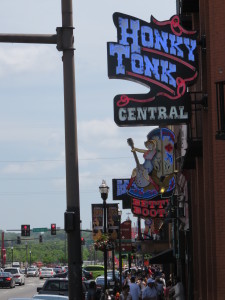 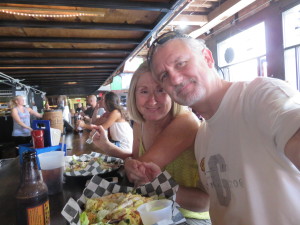 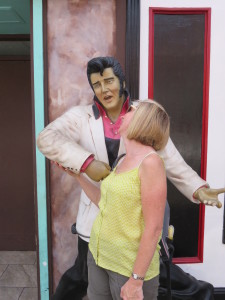 On our second evening we took the car out to find The Bluebird Café of Nashville fame. When we arrived the queue was already stretching along the sidewalk and we doubted we would get in. 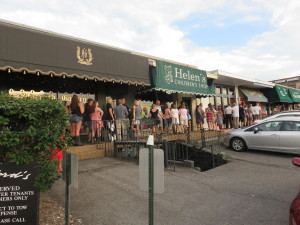 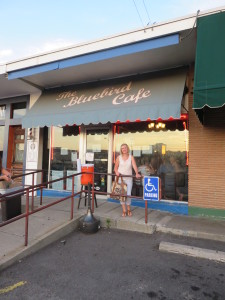 We didn’t but we returned and got a table on our last night and listened to some great Blues with people we met in the queue who were from Sarasota. Turns out we had a lot in common and so had a great evening together.

Our last day here has been spent exploring more of the city, with a tour of the State Capitol building. We had to go through tight security to get in. The man in front of us in the small queue was from Texas and was there with his wife. He was an elderly, matter-of-fact sort of guy who was endlessly emptying his pockets at the request of the security guard.

“I’ll have to keep this with me until you’ve finished the tour, Sir”, said the guard, accepting a knife from the Texan.

The knife was about 4 to 5 inches long; twice that if the blade was out.

“I’ve left my pistol in the trunk”, drawled the old man.

He wasn’t joking! It took ages to get him through security. If Obama thinks he stands any chance of ridding America of guns, he’ll have to get past men like this. It’s simply not going to happen. Yesterday someone told us “you’re in the ‘buckle of the bible belt’ now” It’s a cocktail of religion and guns. Gulp! That’s just what the world needs! Anyway, here are a couple of photos of the Capitol Building… 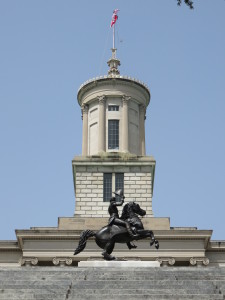 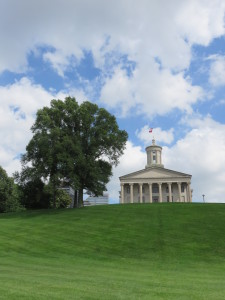 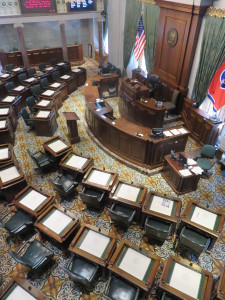 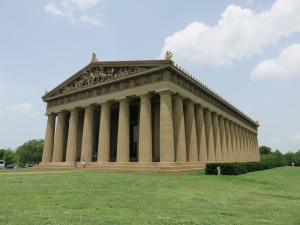 Well, it’s not quite a replica – it’s a quarter of an inch out! Not bad though.

This is an amazing and interesting place. Here are a few more facts. Tennessee was the first state to give women the right to vote but I for one won’t hold that against it! One of its counties (Moore) is the home of Jack Daniel’s Tennessee Whiskey. The strange thing is that Moore County is a dry county so although JD is famously manufactured there, it can’t be sold in shops or restaurants. I’ll leave you to ponder that one! Finally, I’m sure you’ll be interested to know that the street crossings at traffic lights in some parts of Nashville make bird sounds when it’s safe to cross instead of the boring old ‘beep, beep, beep’ you hear in the UK. You can hear them from a distance and they sound like birdsong in the trees. What a great idea!