We were supposed to rise early this morning but, try as we might, we could not drag ourselves out of bed after our walk along the South Rim yesterday. But no matter – looking out of the window we saw that there was dense fog outside and we could see virtually nothing. So we made coffee and stayed in bed.

By the time we were up and ready for the day the fog had lifted and only a small remnant was left – it was going to be another beautiful day: 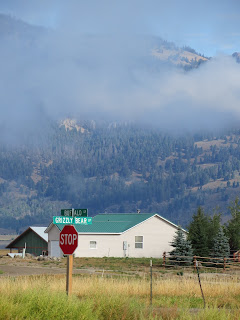 We had visited Prismatic Spring before but were determined to photograph it from above, as we had seen so many wonderful images in the weeks and months leading up to our visit. We took the Fairy Falls trailhead walk towards the spring and looked for the path up the hillside opposite; not an official path but one we new existed from our research. It was a steep and quite difficult climb but within minutes we knew it would be worth the effort. We reached a vantage point overlooking the spring and here are a few of the photos we took. If only they could do it justice; this was one of the most lovely and unusual scenes we had ever experienced. 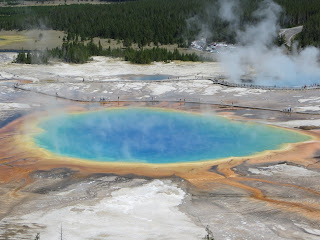 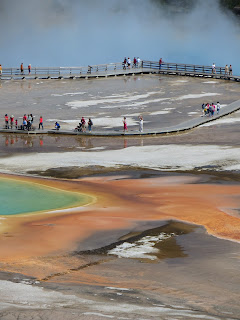 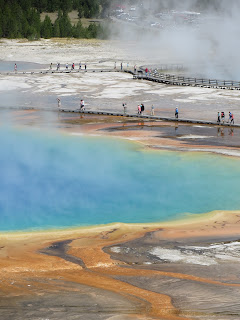 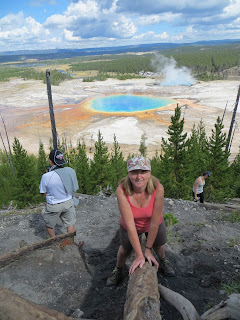 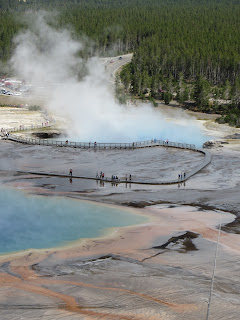 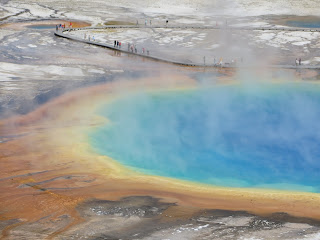 We sat for some time watching the colours changing as the sun came in and out between the clouds. We counted all the colours of the rainbow and watched the steam rising eerily above the spring. We dragged ourselves away reluctantly, knowing we would probably never see this scene again, carefully making our way back down to the path and continuing towards Fairy Falls.

The path we took is closed for much of the year due to bear activity so we made our noisy way, clapping occasionally as we went – just in case. The path entered very dense forest; young forest, which is only now recovering after a fire in the eighties: 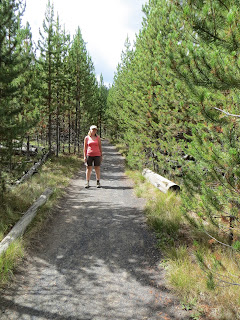 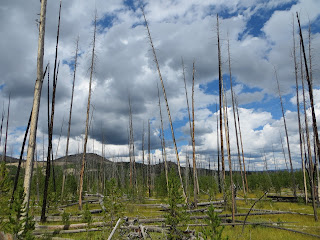 And within the hour we reached Fairy Falls, a 197ft waterfall – the park’s seventh highest. The scene around the waterfall was one of seeming devastation, which must be a result of the fire – blackened trees, some standing and others lying collapsed in all directions on the ground. 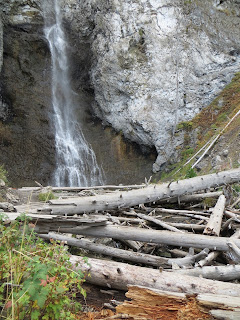 After our walk we returned to the Old Faithful Inn – we visited a couple of days ago – to rest. It was obviously all too much for Rachel as she fell asleep as soon as she sat down. 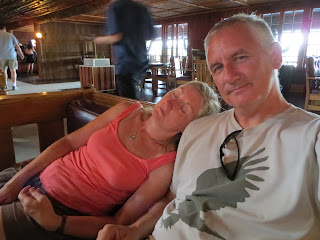 It was still relatively early but we returned to West Yellowstone to wander around the shops and buy Rachel a pair of cowboy boots – a woman can’t have too many boots after all! The evening ended with a BBQ while watching the sun set once more over the mountains. We will miss this when we leave.

Tomorrow is our last full day in Yellowstone.