The roads in Yellowstone loosely resemble a figure of 8. The journey to the northern loop, the top half of the 8 starts, for us, at the West Entrance to the park at West Yellowstone. It’s 14 miles from here to Madison and then it’s north towards Norris Junction to start the clockwise loop. We were heading to Mammoth Hot Springs, which is near the North Entrance, and could see Mount Holmes (10,336ft) on our left for most of the journey.

Today the weather was cool and overcast – the usual early chill was not replaced by the blazing hot sun but this was quite welcome as the heat was oppressive yesterday. This had an added benefit in that it brought out a lot of wildlife that would not come out in the usual heat of the day. The first wildlife we saw was a Bald Eagle, sitting high up in a tree. At first we thought it was a small bear that had climbed the tree – it was so big. A few minutes later we saw Elk, lots of them, at the side of the road grazing: 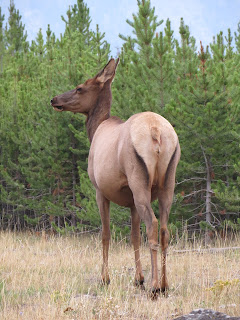 In fact we kept having to stop to take in the wildlife all along the road so the journey took much longer than expected. But we finally reached Mammoth Hot Springs and it was a similar experience to yesterday although it was disappointing that some of the springs and geysers were not active at this time of year: 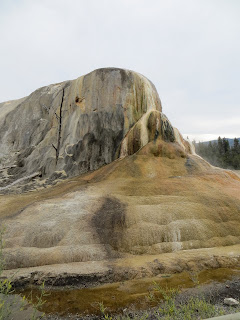 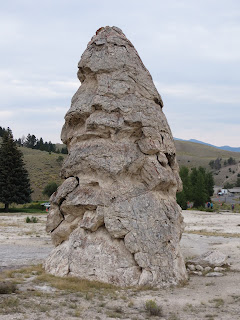 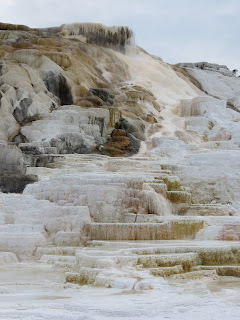 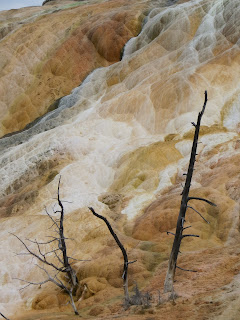 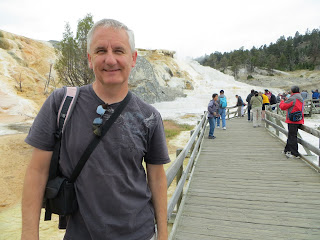 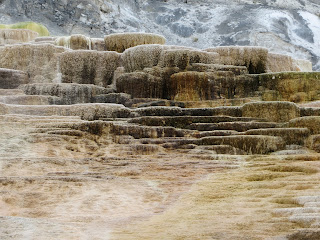 At the north eastern end of the park is the Lamar Valley and by now we had driven a long way, so we were relieved that the reports of wildlife in the valley were true. At one point we were surrounded on three sides by Bison, which kept walking across the road in front of traffic. They were coming within ten feet of the car – pretty scary! 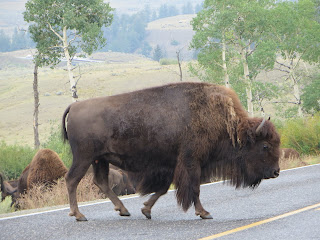 Later we moved on via Canyon Junction towards Norris Junction. We were amazed to encounter a young Black Bear in the road; as we rounded a bend the bear was running towards us on our side of the road, heading straight for the car. When it saw us it veered off into the grass at the side of the road and as we passed it Rachel took a quick photo out of the window – it’s not great but it all happened so quickly. 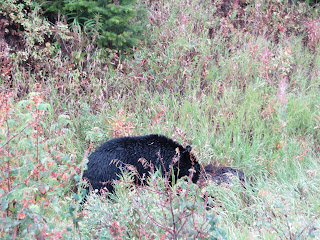 We visited the Geyser Basin at Norris, which has some of the most continually active and violent thermal vents in the park. It was like landing on another world: 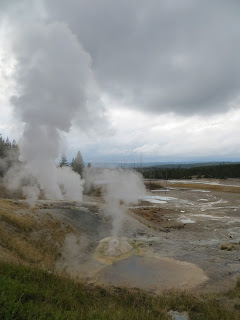 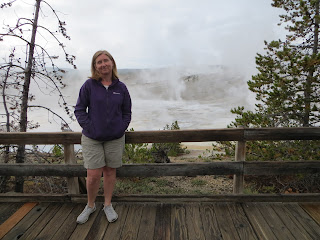 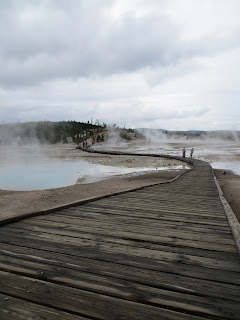 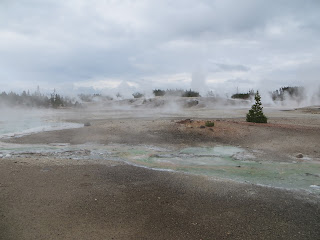 It’s amazing how any of the trees survive this harsh environment and many don’t – they are reduced to stumps; their bark stripped completely away resulting in an eerie, alien landscape. 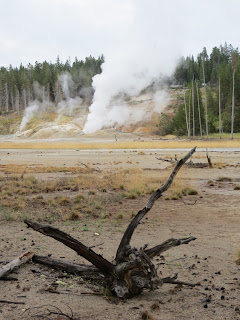 The sun had still not come out by early evening and we continued to see Bison, Elk and even a Coyote on the way back home.

This ended our second full day in Yellowstone.