We arrived at Manchester Airport at around 11am on Monday 21 May and negotiated the usual queue at the EasyJet desk and wondered why they encourage you to check in online before you arrive, as if it’s going to make things any easier or quicker when you get to the airport. The security queue was fine but we were held up by a family that had somehow forgotten what its bags looked like between putting them into the X-Ray scanner and getting them out again! The queue began to snake behind us, but we were through and headed into the departure lounge for lunch.

With only an hour until our flight we had to be quick but Rachel wanted to start as she means to go on and ordered a burger the size of a house. The courage of most ordinary people would fail at the sight of it but Rachel showed the way with jaw dislocating action like something you would see in a wildlife film. Impressive! 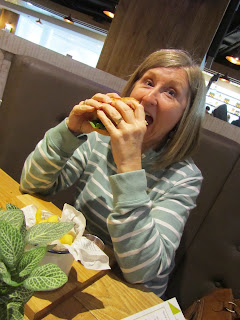 Our flight went without a hitch and we were going to be at least half an hour earlier than scheduled and soon we were decending towards San Marco (Venice) Airport. On the approach we could see the city spread out before us like a map and could pick out the various domes, towers and spires we had visited before. The expanse of water between the airport and the city slid past beneath us and we could pick out the thin lane of traffic (boats) that would soon ferry us to our destination.

We were ready for the usual reception at Italian border control and were not disappointed as we were met by our first miserable, bored-looking official. We could have walked into Italy dressed as Batman and Robbin and this guy would not have noticed. After buying tickets for the boat (bus) we walked the 5 minutes to the jetty. We passed a long line of taxis at the taxi rank and, after a minute or two, noticed a large gap between the taxis. It turned out one of the drivers had fallen asleep at the wheel – his chair was reclined and his belly rested on the steering wheel. The driver in the taxi behind was also asleep. The long line of waiting drivers behind seemed not to care. Skies were blue and the sun beat down – a far cry from the constant sheet of cloud we left behind in Manchester. It felt good and we had long forgotten the border official. 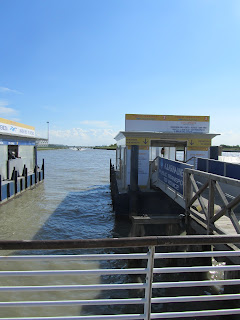 We sat in the cabin of the boat with another English couple, here for only a couple of days and together we poked our heads out of the windows to take in the passing sites on the approach to Venice. Water taxis sped in both directions – this was the water lane we saw from the plane – and were clearly breaking the 7 mph speed limit. But this is Italy after all. It took about 45 minutes to get to the point where the boat turns into the narrow city lanes and we were suddenly in Venice. 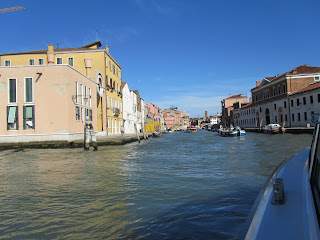 Boats moved in all directions in an environment where rules seemed to be the last thing on anyones mind. The Vaporetto sped by, packed to capacity with locals and tourists alike. Yound people lay on the numerous jetties like basking seals and gondolas bobbed up and down in front of the stunning architecture. And soon we were floating beneath the famous Rialto Bridge and slowing to our stop. 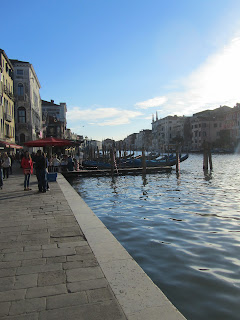 It was clear from the outset that the directions from the hotel website were going to be less than useless and we soon abandoned them. One of the rules of getting around Venice is that you just wonder around the narrow streets, turning at random until you accidentally end up at your destination, wide-eyed and completely unaware of how you got there. 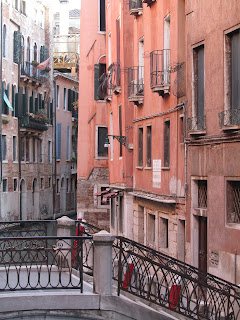 This is how we arrived at the Taverna and entered into the restaurant to be met by a friendly lady who immediately confiscated our passports and, throwing them onto the kitchen worktop, told us we would get them back when we leave! This is another frustrating but seemingly necessary process if you want to stay in Italy.

In the evening we strolled about the local streets and suddenly happened upon the Piazza San Marco – the main square – magnificent in its busy splendour. Quartets played, tourists sat chatting, eating and drinking wine and the towering campanile looked on. We settled upon the Ristorante La Serenissima and ate pizza. 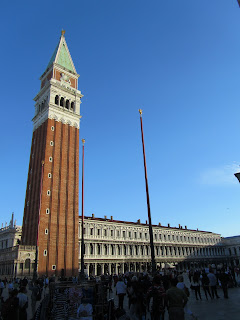