It’s great to be back in North America. We are exploring a completely different part of our favourite holiday destination – we are in the Deep South, embarking on a road trip that will take in seven states. This time it’s mostly about music so we are here to explore the home of Blues, Jazz and Country. We’ve heard that this part of the world is different to anything we’ve been used to in the US in the past so we are excited to find out what’s in store for us. We entered the US in Atlanta, Georgia and travelled north to North Carolina and the Smoky Mountains.

The drive was, for the most part, unremarkable but the pleasure that comes from riding a silver Mustang along wide, spacious American highways made it worthwhile and it was not until we were in the northern most part of Georgia that the scenery turned more dramatic and mountainous. What strikes you the most is the number of trees; the mountains are literally covered with them. It must look like broccoli from the air. We stopped to eat in a little place called Dillard and found the only decent eating establishment in the whole journey. It was called a ‘Bar’ but we found that alcohol was not on the menu. We may have found one of the many dry counties in this area as alcohol cannot be sold in restaurants and shops in many areas around here. There are, however, countless churches – Baptist mainly, one after the other along the highways. Maybe these two facts go predictably together. Anyway, our Coke and Lemonade were very welcome in the 100 degree heat, even as evening was drawing in.

Our GPS took us deeper into a mountainous area that began to feel very remote and we kept losing the GPS signal but eventually reached our destination just outside of Bryson City, up a steep and stony dirt track that our car was not built to navigate. We had to take a run at a really steep bit to avoid losing traction – all a bit scary for the first time. We are used to it now. Here’s some photos of our cabin and home for the next few days. 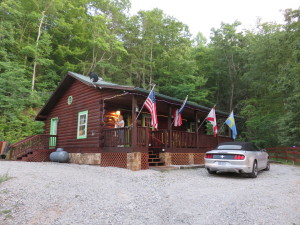 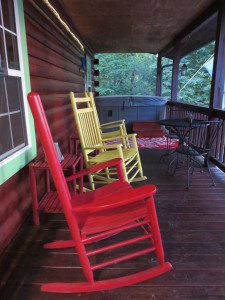 It’s set in amongst the trees and constructed completely of wood, with a lovely porch outside complete with rocking chairs, grill and hot tub. It’s exactly what we had imagined it would be – typically American. I have to admit that it was a bit spooky when we arrived. There are many native Indian paintings and ornaments dotted about the place, a painting of a very creepy wolf over the bed and a deer’s head on the wall in the living room. We are a stone’s throw from an Indian reservation and the town of Cherokee is something to behold – like something out of a Wild West movie!

We desperately needed some supplies before the night closed in and headed out again to a store we had seen on the journey in. It was basically a shed (no kidding) with petrol pumps outside. When we entered the store we thought we had walked into a squat. The old man sitting behind the counter looked like he hadn’t washed for days and was wearing a very grotty vest and stared wildly at us as we moved about the store. We tried to avoid eye contact with him at all costs and talked in hushed tones as we crouched behind the depleted shelves. The place reminded me of someone’s garage badly in need of a good old clean out. To avoid the embarrassment of walking out empty handed we settled for large bottle of water and took it to the counter to pay. The old man’s eyes were fixed on Rachel as she searched for a couple of dollar bills. He stared and stared in a manic sort of way and I came to the conclusion that he had never seen a woman before in his life. Now, Rachel can get on with anybody but not this guy. She turned on her most affable charm to no avail. We didn’t understand a single word that came from his mouth. His grunts and snarls were animal like and I’m sure he will have had a loaded shotgun under the counter, just in case! We left quickly and he watched us all the way back to the car. We drove a little way further up the highway and pulled in at a gas station, which looked like it had a shop. It did. It sold a little of everything and I mean little. The stock looked like it came from the Second World War but at least the man behind the counter had washed, shaved and could string a sentence together. We arrived back at the cabin with a huge sense of relief. This was indeed very different to what we had experienced in America before.

A word about bears. Apparently the Black Bear is very “active” in these parts at the moment. I read a book last year by Bill Bryson called A Walk in the Woods about his walk along the 2,200 mile Appalachian Trail: the longest continuous footpath in the world. We’ve walked exactly 0.05% of the trail on this trip. Well, you have to start somewhere! 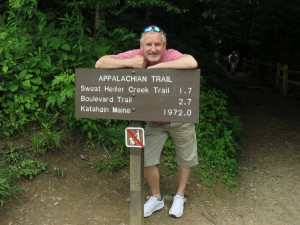 His scary tales about his potential bear encounters are at the forefront of my mind at the moment. Rule number one: if you come face to face with a bear don’t run! Really? Rule number 2: don’t go walking in the wilds with a backpack full of Snickers. Sounds sensible as bears love Snickers… and the humans carrying them! The Appalachian Trail is very close to where we are staying so I decided to secure the perimeter of the cabin before turning in one night and walked down the path to close the gate. As I did so, something strange caught my eye. Across the other side of the dirt track and, in fact, all around me there were strange little flickering lights, like sparks rising from a bonfire; there for a moment and gone the next. I realised they must be fireflies; something I’ve never seen before in my life. I called Rachel to come and look. They were amazing and I remembered that America has given us many ‘firsts’ over the years and this was one more.

We turned in for the night; me in our very comfy bed made from tree branches knocked together and Rachel on the outside porch with Snickers taped all over her body. You can’t be too careful, that’s what I always say. I slept like a baby.

Next day, we went walking in the Smoky Mountains. It was hot, humid and completely knackering! 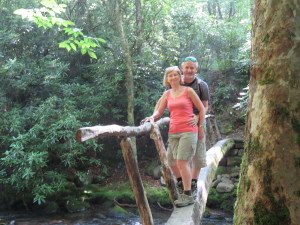 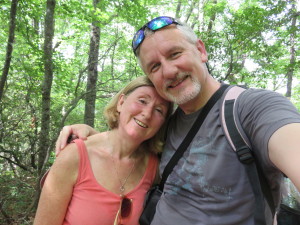 We ended the day with steaks cooked on the grill. 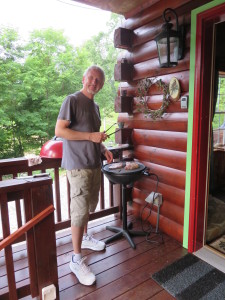 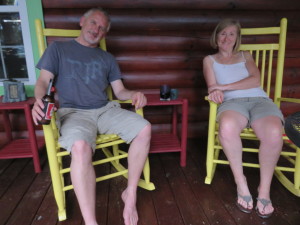 Our last day in the Smoky Mountains was spent driving right across the  national park, stopping off at points along the way to walk or picnic. 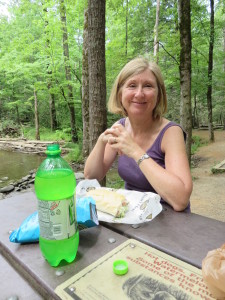 Clingman’s Dome is the highest point in the national park with a viewing platform at the top. 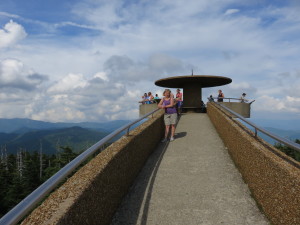 The views of the distant hills were worth the climb. 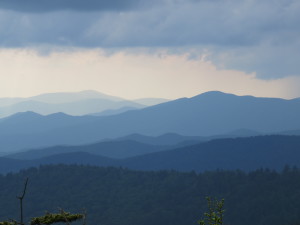 One more small tale before leaving this section of the blog. On the way down from Clingman’s Dome we passed a mother trying to coax her very small and very chubby boy up the steep hill to the summit. He was not very pleased to say the least and was lagging behind by some distance. His mother was probably telling him “come on Tyler, not far to go now. It’s just around the corner.” As we approached the little boy I said to him “come on Tyler, it’s only three more miles.” I thought he might take it as a joke but, instead, he burst into tears. I must admit I felt a little bad about that but we did have a little giggle on the way down.