It had been raining heavily all night and looked set to continue so, at breakfast, Rachel tried to cheer me up with her breakfast buns: 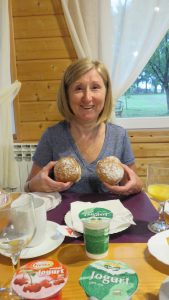 I’m sure you’ll agree that they’re magnificent and likely to brighten up any occasion but, to be honest, it was a little early for me and so I settled for bacon and eggs before the long journey ahead, which would take us down the coast to Trogir via Zadar.

Zadar was a good mid-point in our journey to take a break and get some lunch but, to be honest, it would be a rather forgettable place were it not for the amount of Roman ruins literally scattered about the centre of town, which was, of course, the Roman Forum. There are no labels or boards with descriptions of the relics lying around. It’s as if Zadar is so accustomed to being amongst such treasures that it forgets that the less fortunate (us poor tourists) really crave knowledge of such things. Children were clambering all over the stones, pillars and sarcophagi without a second thought but you could spot the tourists, wondering around like zombies, mesmerised by the sight. 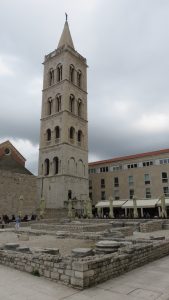 There’s only one Roman column still standing and it’s amazing to think that it’s been right there since just after the time of Christ. The column was used in the Middle Ages as a ‘shame post’, where wrongdoers were chained and publicly humiliated. You can still see the remains of the chains. They really had a no nonsense approach to punishment and justice in those days. 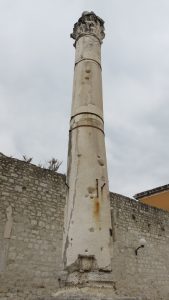 The only other thing I would mention about Zadar is the unique Sea Organ. Set into the stone stairs that decend into the sea are a system of pipes and whistles that produce audible sighs and tuneful notes as the action of the sea pushes air through them. People gather and sit near the steps and gaze into nothingness as if hypnotised by the sounds. It really is a lovely idea.

Lunch came and went and we were on our way to Trogir.

Our apartment in Seget turned out to have a fantastic view across to the little island of Trogir, which is enclosed within medieval walls and linked by small bridges to the mainland and also to a larger island called Ciovo. There’s almost no traffic on the island of Trogir so you can walk for hours within its very narrow, cobbled streets unhindered, although the streets are full of tourists like ourselves. Every street is filled with restaurants and bars and also the odd boutique. 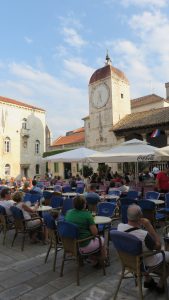 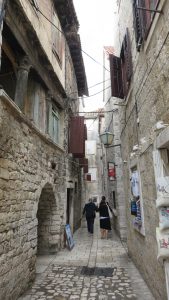 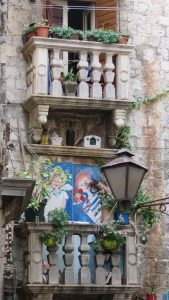 The best way to access the town is by taxi-boat. 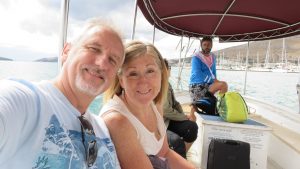 At the seaside promenade, people meander along admiring the many very large and expensive yachts, which give the town a very upmarket feel. 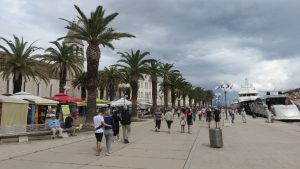 We’ve found Croatia’s food and drink to be particularly inexpensive but Trogir is an exception to the rule and there are many fine restaurants to choose from although the level of service can be variable. Today, we spent a couple of hours in a bar that played great blues music, which was the only reason we stayed. The barman was uninterested in making any effort to make customers welcome and after bringing our first drink went absent without leave. Then we had a fantastic, high-quality meal with great service just around the corner.

Last night, we had a meal in what can only be described as a corrugated shed. Cats wandered freely within the restaurant and one of the waiters would regularly run through the restaurant, chasing the cats with a water pistol! One cat, having been cornered by the waiter, jumped onto Rachel’s knee and almost into her Carbonara and no-one seemed to think this was the least bit unusual.

Before concluding our blog for this leg of our trip it’s worth mentioning our visit this morning to Solin. It’s only 20 minutes away by car towards Split but the journey showcased the worst, in my view, of what Croatia is sometimes like outside of its beautiful, ancient cities and towns. It appears that most modern buildings are thrown together with concrete and corrugated iron. The area around Solin looks like a vast industrial estate and the only redeeming feature is that it holds the ruins of the administrative headquarters of the Roman Dalmatian province. This ancient city is vast and sprawling, containing city walls, an amphitheatre, baths and episcopal centre with many burial sites of Christians persecuted and killed under Roman rule. 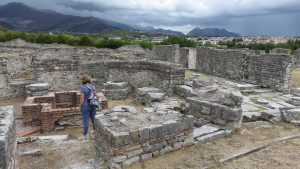 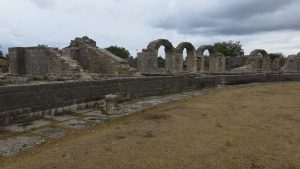 We walked within its buildings and streets for about two hours, picking out the main features until the weather began to close in and we headed back home.

Our final day in Trogir ended with a taxi-boat ride home under an almost full moon. 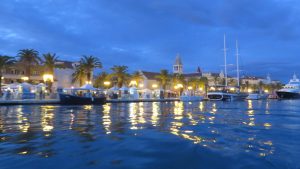 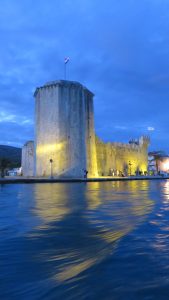 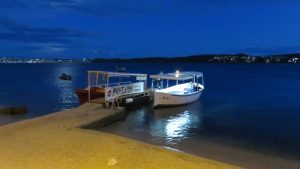 Tomorrow we will be heading for another island – the island of Hvar, just off the coast of Split.