Although we were staying very near to Pula we had not ventured into its centre, so before leaving Istria for Northern Dalmatia we headed for what was once a hub of Roman activity with the promise of some great Roman ruins.

Pula could be described as being a pretty ordinary place, were it not for what is known locally as The Arena, the sixth largest and one of the best preserved Roman amphitheatres in existence. 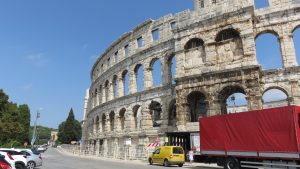 The Arena really is awe-inspiring due to its sheer size and visible detail and you have to hand it to the Romans because they really knew how to enjoy themselves, even if it was at the expense of blood and, let’s face it, cruelty on an industrial scale. There was a lot of money to be made in gladiatorial combat for the well heeled of the city and the spectacle of death in combat or at the jaws of lions was matched only by the theatre of it all – costume, colour and the noise of up to 20,000 people. Stood in the centre of the Arena you can really try to imagine the scene – like Wembly on cup final day but without the disembowelment, of course. 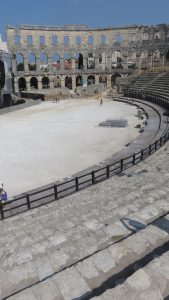 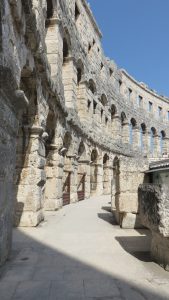 Today’s excitement in the Arena is in the form of summer concerts and festivals and the only cruelty is probably the price of a ticket.
We headed for the Forum which, in Roman times, was the main public square. Now it is given over to cafes and restaurants. But Pula’s Forum holds another wonderful piece of history – the Temple of Augustus built sometime between 2 BC and AD14, the year Augustus died. You can’t help but just stand and stare at the glory of it and the photo probably doesn’t do it justice. 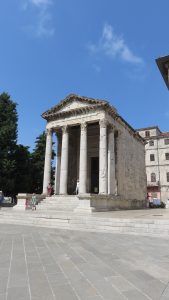 Unfortunately, it was hit by a bomb in WW2 so much had to be repaired but its impact and meaning are undiminished today.

Being inside such a place is so special and I felt privileged to be able to witness it in my lifetime. Here’s the view from the temple overlooking what was the Forum, where Rachel was waiting in another lovely cafe under the sun. 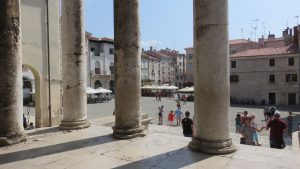 Pula was spoiling us with its Roman delights. The Triumphal Arch of Sergius stands somewhat incongruously amidst hotels and restaurants and I can imagine locals walking under it every day on the way to work without a second thought. But for us it was another chance to stand and stare at something that was built in 27 BC, simply to commemorate members of a family of distinction in Pula. Again, here are the Romans doing something special in a really big and lasting way. 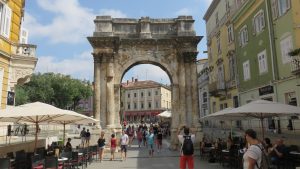 Our final stop in Pula took some finding as it is hidden away at the back of an office block and signs showing the way are very understated indeed. This wonderful mosaic floor, deep under the foundations of the building next to it gives the appearance of having been discovered during construction of the building and simply left there for all to see, protected by some pretty ugly railings. I would like to think that such a find would have been given more special treatment than this but maybe it says something of the wealth of artefacts in this city that they don’t need to make a song and dance about this one. 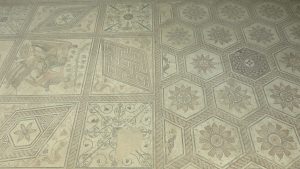 By now it was mid-afternoon and we still had a three and a half hour journey to make so we left Pula and Istria for the region called Northern Dalmatia.

The sat nav took us through some very remote countryside on our journey to our next destination – a small town called Rakovica. The journey was punctuated by buildings that looked in serious need of attention. Many appeared to be empty with collapsed walls and roofs. I couldn’t help commenting that one house looked like a rocket had gone through its otherwise perfect roof. Derelict buildings were scattered everywhere although we did see a very old lady sitting outside one such building and we wondered how she could survive so many miles from anywhere and in such a sad looking house.

Civilisation returned as we approached our destination and we were glad to see the place we would spend the next couple of days. 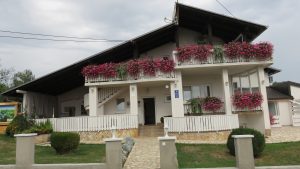 We were met by Marijana, who is the consummate host and we were advised to make an early start to beat the crowds in the morning when visiting Plitvice Lakes National Park. It was hard to believe that there could be so many people around as we had seen so few people, anywhere, all day.

But we took her advice and were up at 6 am for an early breakfast of local sausage, fried eggs, cured ham and cheese, before setting off for the park. Marijana was, of course, right and there were many people ahead of us already. We had missed the park entrance once already because, as you now know, Croatia doesn’t do signs and it was not easy finding a parking space, again partly due to the lack of signs – are you getting the picture? THEY DON’T DO SIGNS! If you come, bring your own.

With the car safely parked we took the bus to the ‘upper lakes’ to start our trek around the lakes and waterfalls that draw such crowds in this region. It can take 5 to 6 hours to complete the longest route. 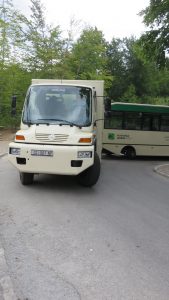 We decided upon the longest route through the lakes, which consists of boardwalk walks, buses and boats and we enjoyed the beautiful turquoise lakes, forests and the numerous cascading waterfalls which form the main attraction here. Here’s Rachel striding off ahead at breakneck speed, leaning forward, chin thrust outward, fists clenched; it could only mean one thing – a toilet emergency in the wilderness! But that’s a story for another time. 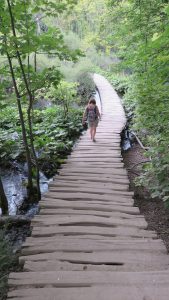 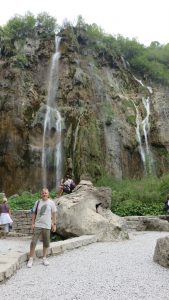 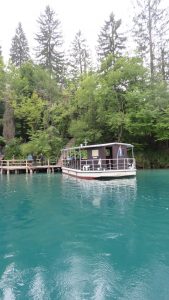 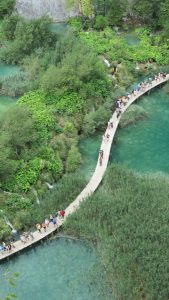 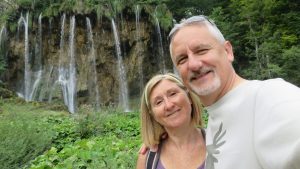 By the time we returned to the park entrance the crowds were legion and we were so glad we made the early start thanks to Marijana. As we left the park the rain started to fall and continued to fall more heavily all afternoon. The park is a lovely place to be but not in such crowds and in heavy rain.

When we got back to the B&B we chatted to Marijana for a while. She told us that she lived here before the war in the 90’s but had to evacuate when the war came. She left everything here and returned after the war to find the house “crushed” in her words, along with many of the other houses in this region of Croatia. We suddenly realised that the house we had seen with the hole in the roof really may have been hit by a missile of some kind and it explained the many vacant and dilapidated buildings we had seen on our journey here. Had people left and not bothered returning? It was a sad thought to end a lovely day in the lakes.

Tomorrow we head south and back to the coast.