Dolphins, Tornadoes and a Blind Dog

Today was mainly a travelling day and our journey would be to Sarasota for the final leg of our short trip. It was overcast and cool and the sky looked troubled and ominous. But here, you always expect the sun to arrive sooner rather than later. But today was different. We had decided to stay in Naples a little longer, as we had seen relatively little of it due to the attraction of the islands in the north. We drove in the general direction of ‘downtown’ and found Naples Pier. We had read about it earlier and decided to stay for a while. 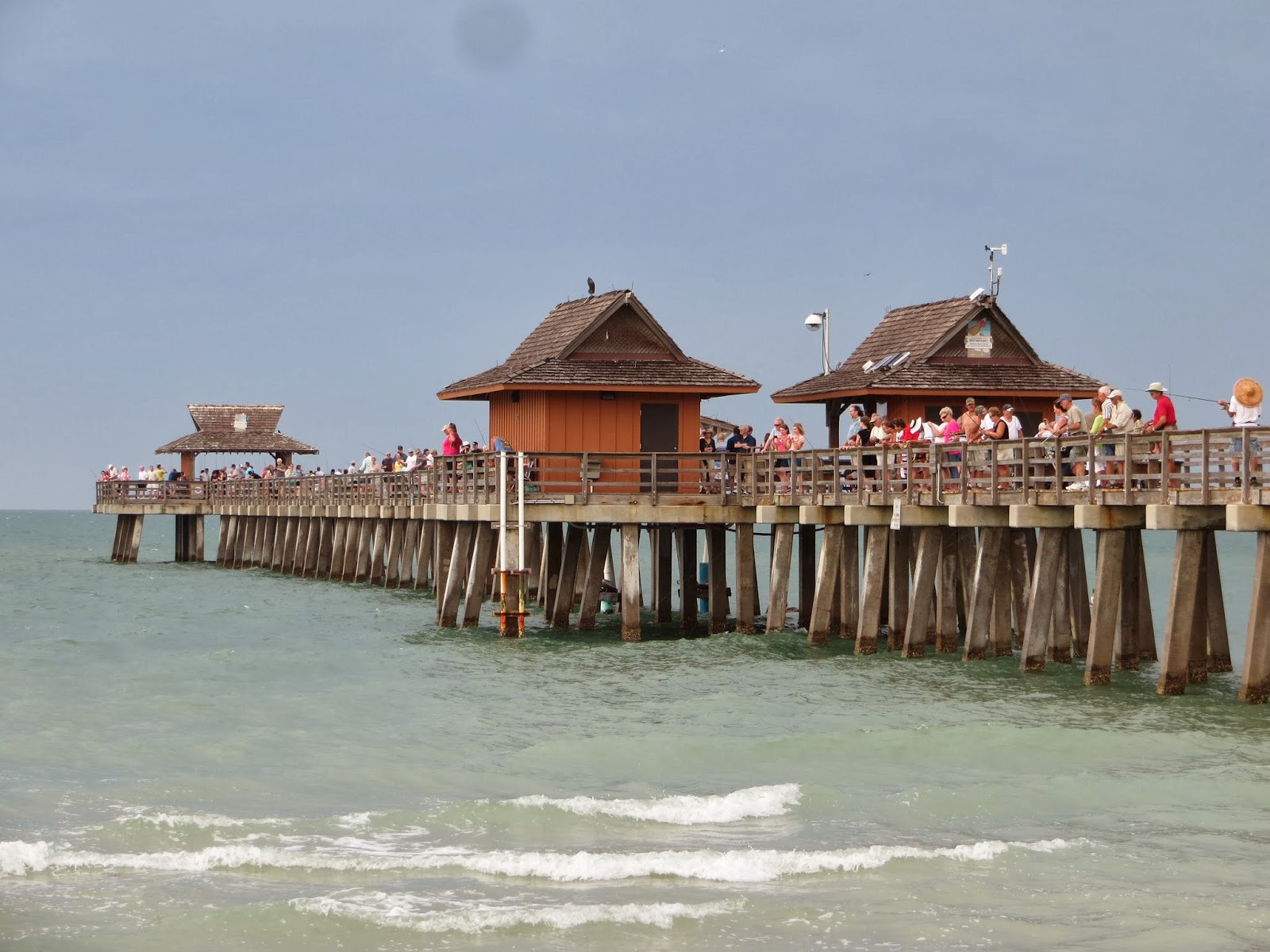 As you can see from the photo there were quite a few people on  the pier. This is to be expected in high season and many were fishermen (and women) casting their lines into the bay.  But what we didn’t expect was dolphins. The first sighting felt unreal; seeing them so close, yet in the wild. They meandered lazily around the pier, occasionally popping their heads out to see their audience and, sometimes, leapt from the water as if to show us what they could do. We counted at least 5 or 6 and some were with their young. It was difficult getting a good shot of them due to their unpredictability but here is just one of them: 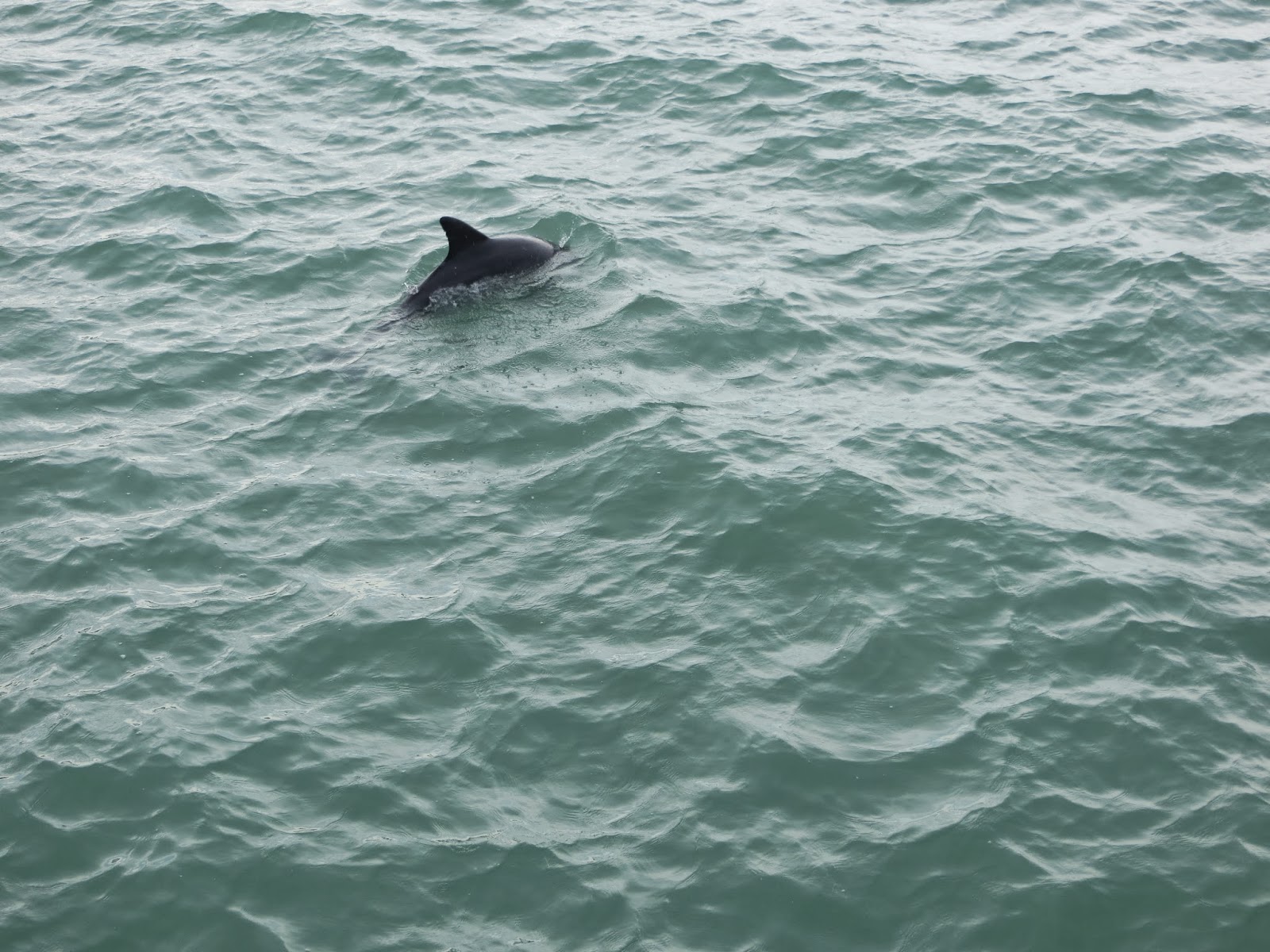 Pelicans sat beneath the pier, right under where the fishermen prepared their catch and discarded the remains back into the sea. As we walked up and down the pier we overheard rumours of rain, due to arrive sometime between 1pm and 3pm. We had plenty of time and so we walked along the beach road to see yet more spectacular houses of the rich. 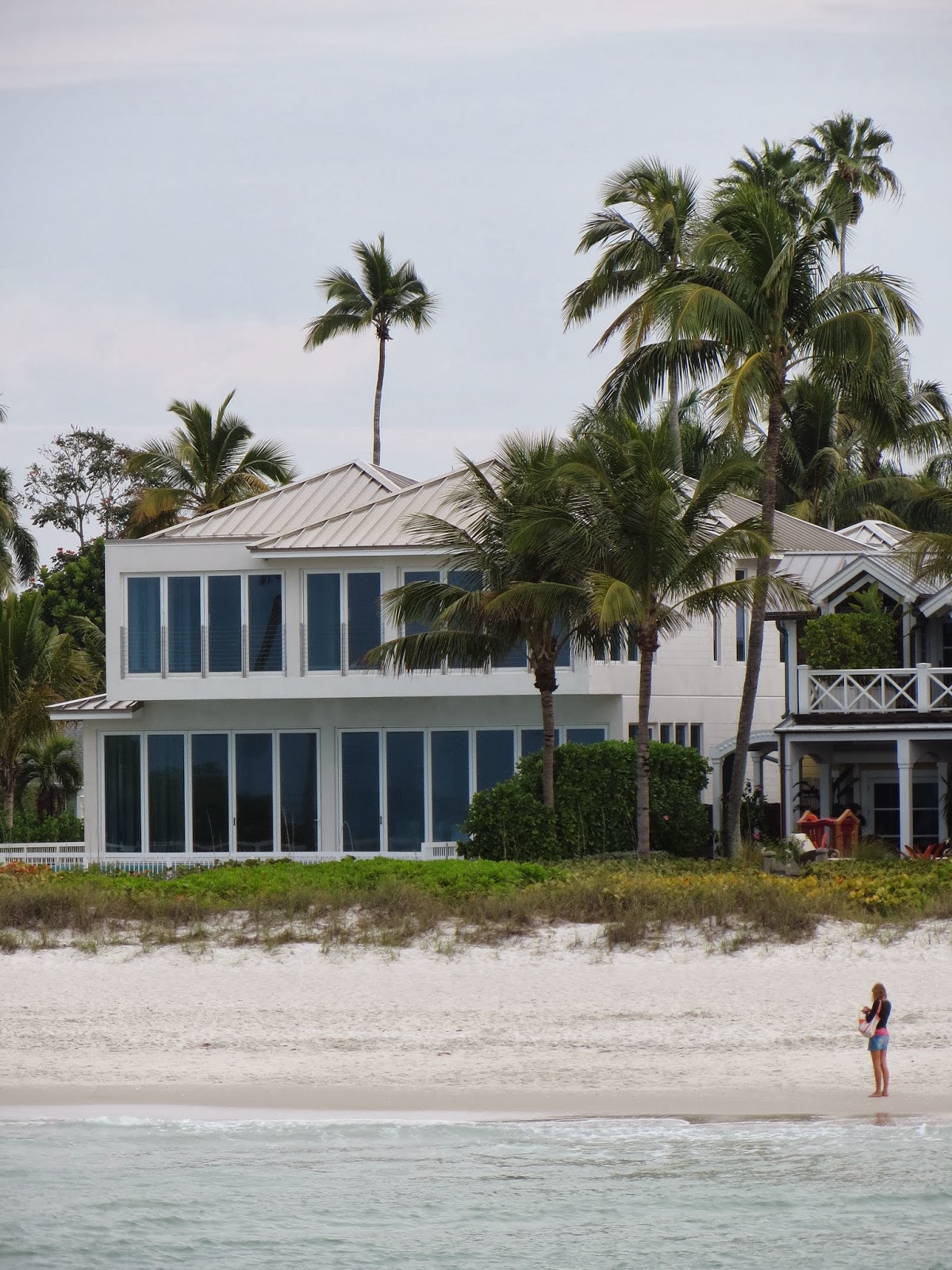 This is how the other half live! We recently saw a house for sale: it had 13 bathrooms and cost over $8m. It was time for lunch and so we drove a little further towards town and found a great little bay-side restaurant called The Dock at Crayton Cove. As we parked the car the sky was looking a little darker but we got a table quickly and settled down to fish sandwiches and beer. Mine was Grouper; grilled with nothing added – lovely. Soon the TVs around the bar flashed up a Tornado warning for this and other areas on the Gulf coast: 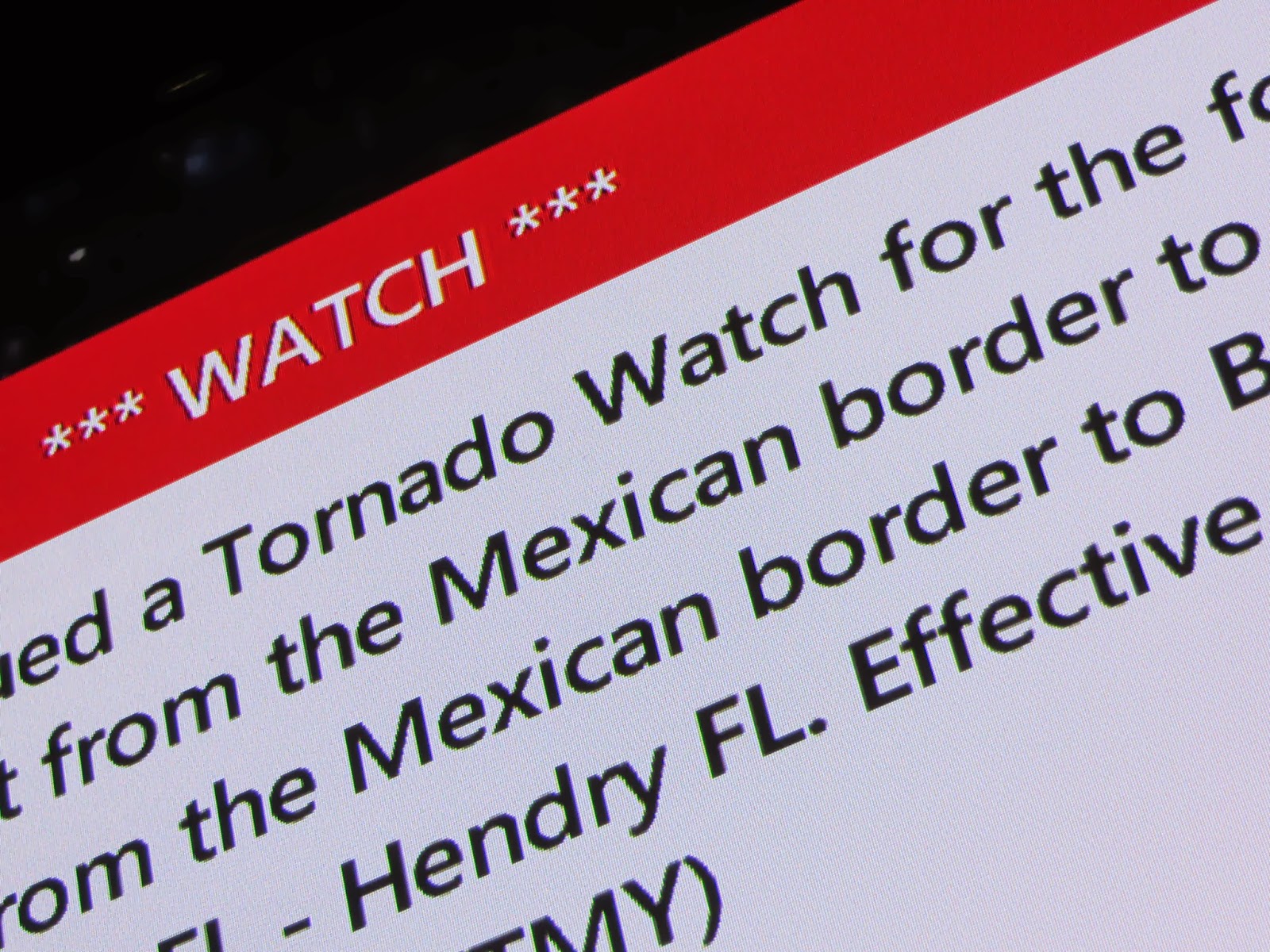 Within minutes rain lashed down; a deluge of mammoth proportions, overflowing the roof gutters and spilling over the edge. Palm trees bent in the wind, the bar doors blew open and a throng of soaked day-trippers fell in through the opening and huddled, dripping in front of the bar. No matter; the plastic shutters came down, the doors were secured and beer and fine food continued to emerge from the kitchen as if nothing was happening. They had clearly seen it all before and anyway, nothing was standing in between Rachel and her Key Lime Pie! When the storm abated we ran through what was left of the rain, jumped in the car and headed for Sarasota.

We had no trouble locating our next lodging. It turned out to be a very ordinary (by British standards) house in an ordinary street just off the Tamiami Trail and as we turned into the driveway of the bungalow, which was almost hidden by palms of all kinds, a man came out to greet us. He introduced himself as Ken and we got off  on the right foot when he mistook me for a rock star in his favourite band! And I was sure he was Dustin Hoffman, so we were all square. He showed us inside and his wife, Andrea, emerged from the kitchen and, amazingly, she immediately reminded us of Barbara Streisand; maybe you know the film that springs to mind! She shook our hands gently and kissed each of us and we immediately felt like their long-lost family, coming home for Christmas. Again we were struck by the effortless hospitality of ordinary Americans; we liked Ken and Andrea immediately. Ken wished me happy birthday and offered us a drink to celebrate.

“We’ve got everything”, he said, “Bourbon, Tequila, Vodka?”

I went for the Tequila with ice and Rachel had something that resembled a Pina Colada. We stood in their lovely kitchen, clinked glasses and chatted like old friends. I sipped my neat Tequila and tried to retain my composure as my eyeballs burned from the alcoholic vapour. I thought I might lose my eyebrows. Next time I’ll ask for soda too! How cool am I? Next, they showed us photographs of their family, which covered the walls and stood on every shelf. Their kids and grand kids were obviously a big part of their lives and they even had photo albums dedicated to their dogs; one of which had died (a German Shepherd). But they still had Sadie; a tiny 16 year old Chihuahua-Shih Tzu cross. We know that a Labrador-Poodle cross is called a Labradoodle. Any offers for what a Chihuahua-Shih Tzu cross might be called? Answers on a post card.

Sadie is almost completely blind and deaf and her sense of smell  is not what it was but she is beautiful and as long as the furniture is not moved she can find her way around the house. Sadie followed us all around as Ken and Andrea showed us the house. We were chatting in the bathroom when Andrea said “Oh Sadie, not again”.

“Is she doing it again?” asked Ken.

“Get her to stop”, said Ken, and we looked down to find Sadie having vigorous carnal relations (I’m putting this as politely as I can) with the shag pile bathroom rug. It was a slightly tense moment as Andrea tried to prize Sadie from the rug. She hung on valiantly and I kind of felt sorry for poor old Sadie: a very old, blind, deaf dog can’t have many pleasures left in life. Having said that, afterwards we made sure that we didn’t step on the rug getting out of the shower.

After that we needed a drink and our hosts directed us to a nice little restaurant called Knicks, which they know well. And so we ended an interesting day with a nice meal – alfresco. 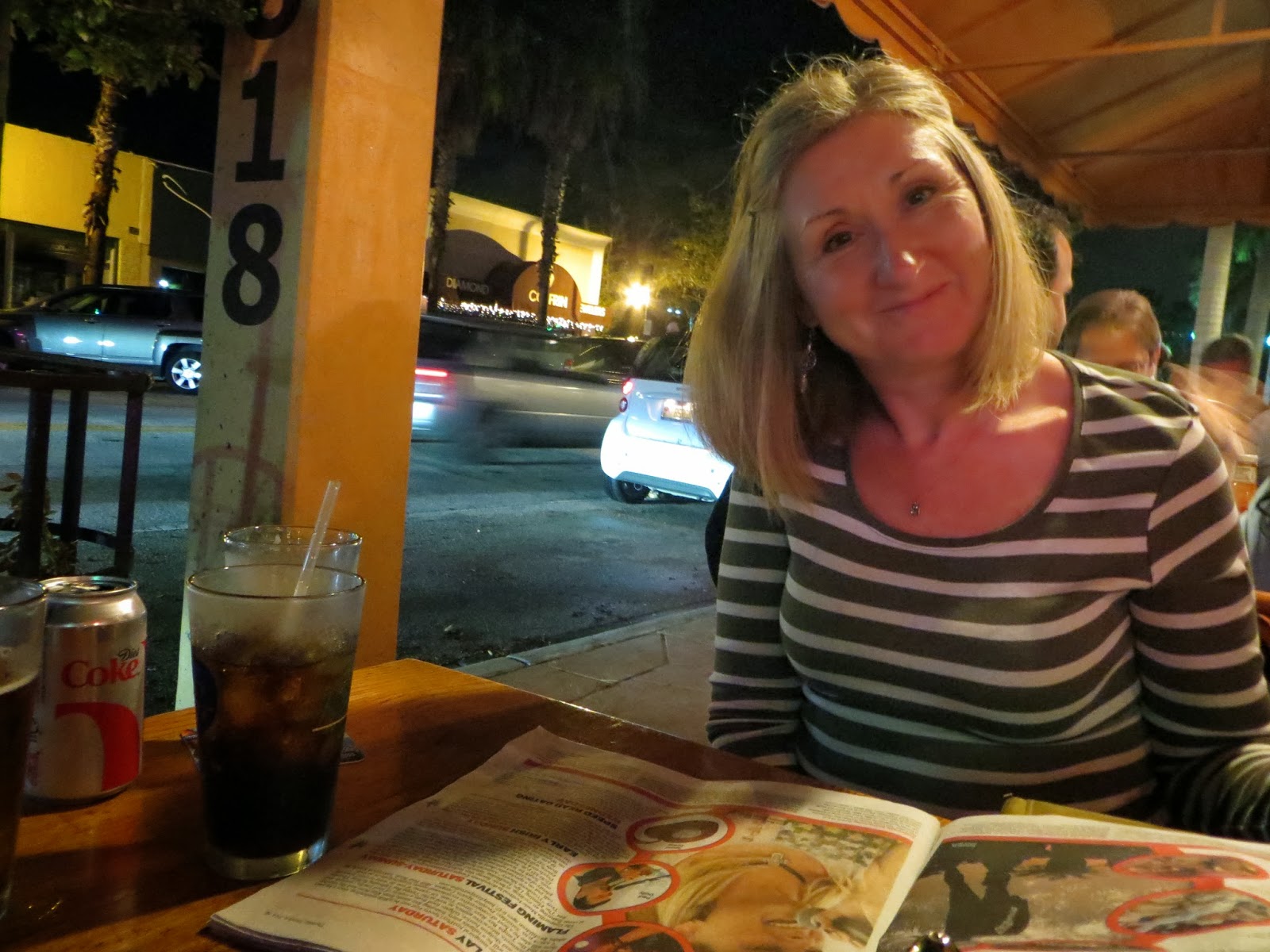