Yesterday tired us out more than we had thought, so today we decided to stay local and walk into Rimini. Our hotel is situated on the sea front, away from the main centre so we walked 20 minutes north along the front before turning left up the Medaglie D’oro and through three parks to the oldest Roman arch still standing: the Arch of Augustus: 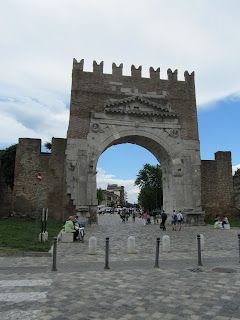 The journey to this point had been along a pedestrianised path, filled with joggers, walkers and cyclists. We passed a dog park – like a kid’s playground, but for dogs! We witnessed an altercation between a woman on a bike and a female dog walker. This is a familiar site in Italy. Raised voices, big hand gestures and noses almost touching, the argument went on for about 30 intense seconds before calm once more resumed. No-one took much notice.

Once through the arch we were into the main shopping centre and soon stood in the Piazza Tre Martiri. We hadn’t expected such a nice square. As usual, people sat drinking coffee, cyclists weaved in and out of walkers and the sun beat down. Here’s a picture of the sqaure and the beautiful clock: 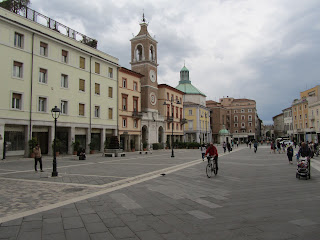 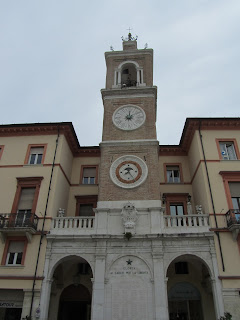 From the square we headed the hundred yards or so to the Tempio Malatestiano; a rather unassuming and ordinary (by Italy’s standards) church: 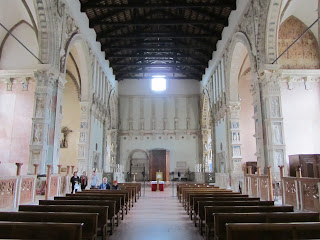 There was another grotesque depiction of the dead Christ in marble, encased in a golden cage and lit garishly at the front of the church. Candles burned in front of it. This time there was no slot machine for money!

This is a very Roman town and was strategically important to a number of emperors. There were three major roads from here – Via Flaminia to Rome, Via Emilia to Piacenza and Via Popilia-Annia passing through Ravenna, which we will visit tomorrow. There is also an extremely old Roman bridge, crossing the river: 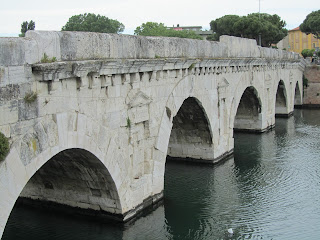 In the Piazza Ferrari a municipal gardens was to be contructed but important remains of a 3rd century surgeon’s house were uncovered, so work had to stop. Here are a couple of photos of what was found: 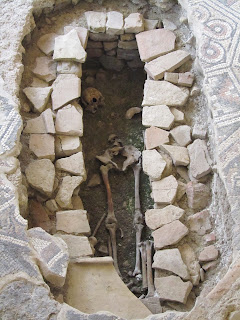 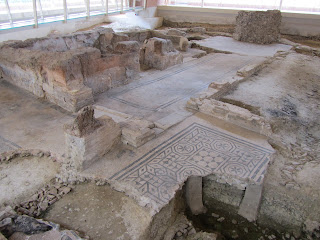 We walked back to our hotel along the sea front and immediately fell asleep for three hours – the many days of walking were catching up with us. Our final evening was spent at a couple of sea front bars/restaurants, where we ate pizza and pasta (and swore not to eat it again for at least a month) and drank cocktails. We had been a little harsh about Rimini when we arrived but we were now warming to it. 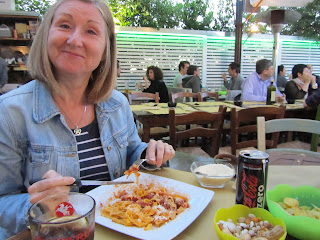 Tomorrow we fly home, but not before visiting Ravenna on the way. Our final blog will be from home.