We had learned from our previous mistake and, this time, decided on our destination and started early to beat the traffic. We drove straight to Logan Pass, didn’t stop en-route for photos and took one of the few remaining parking places. The Highline Trail, sometimes known as the Garden Wall was recommended to us by Dana; the lady we met on Tuesday. It starts just outside of the Logan Pass visitor centre. 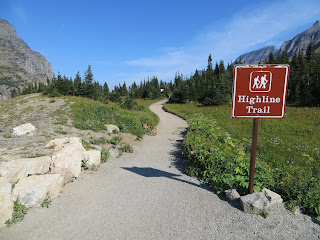 Two minutes into the walk we were confronted by a very scary warning sign telling us that there were Grizzly Bears and Mountain Lions in the area and that our ‘safety cannot be guaranteed’! It continued with a whole load of rules to maximise survival chances: 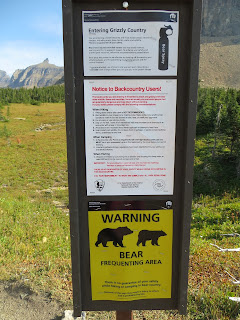 After reading it I estimated our chances of survival at about 15%! But we had got up early and driven a long way so we were doing the walk – with or without bear spray!

This walk was approx 8 to 10 miles one way so we decided on a point of return (assuming we survived that long) and intended to stick to it. The height of the walk became evident a few minutes into it, when we had to negotiate a narrow (at times) path along the cliff edge with a sheer drop to the road below on one side and the overhanging cliff face on the other. 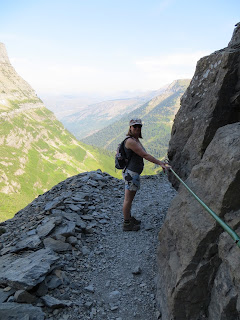 Later, the path settled into a meandering trail through forest and baron stone wilderness but always with breath-taking views down the valley, where we could see the snaking Going To The Sun Road far below. The enormous waterfalls, which would be full and thundering after the snow melt were now almost completely dry revealing their route in stone steps down to the valley floor. We continued, clapping (telling the bears we were there) our way around every corner and chatting to people along the way and picking Huckleberries from the bushes – the ones with reddening leaves we were told. 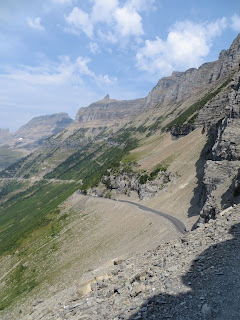 A short steep climb and we reached our point of return (the Butte) after about 2 hours and stopped to rest and take some photos.

Caption Competition: What is Rachel saying or thinking in this picture? Answers on a post card! 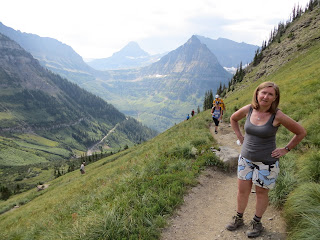 But we had made it: 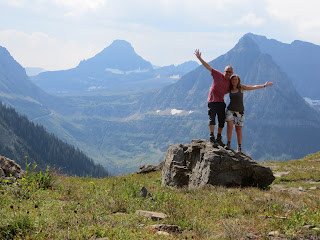 We were joined by a very friendly furry creature, which we believe to be a Columbian Ground Squirrel. 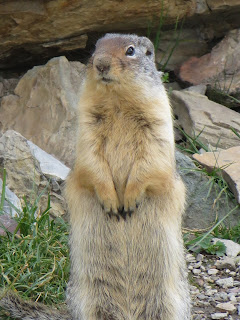 We have seen many of these during our visit. They are used to the many humans they encounter every day and come within inches and even climb onto your lap if they think you have food for them. But feeding the animals is forbidden in the park.

So we headed back completing the walk in approx 4 hours with only a light salad lunch to look forward to. We later rectified that with a New York Strip Steak at a tiny shack in Hungry Horse.

Oh yes, I forgot to mention the storm. On the way back from Logan Pass it was beautiful sunshine and when we reached Lake McDonald we commented on how calm the water was – like a mirror; beautiful. We could see the clouds changing, becoming a little darker with impending rain, but this is normal in the afternoon. However, within the space of no more than 5 minutes it went from calm to gale force winds, lashing rain with really bad thunder and lightening. Tree branches were flung across the road, some of them about 3 or 4 inches in diameter. The lake was in turmoil (as was Rachel, as she was driving at this time) and by the time we got home all the electricity was off as it was for miles around. But as quickly as the storm arrived it moved on and normal sun service was resumed. Amazing!

We have to leave for Yellowstone tomorrow. We’ve had a great time here in Glacier and will take many happy memories with us. Yellowstone will be the last leg of our trip.