Day 5 – Florence in the Rain

It started raining heavily during breakfast and continued raining, on and off, all day. So by the time we reached the Uffizi Gallery we were pretty wet! We had purchased our tickets in advance over the internet and so expected to walk straight in. The gallery, however, had other ideas. We joined what looked like ‘the queue’ only to be told that the queue for ticket holders was over the other side of the gallery. So we joined queue number 2. Just as we reached the front of the queue we were told that we were too early and would have to leave the queue until about 10:15am. That was half an hour away. So we sat and waited. 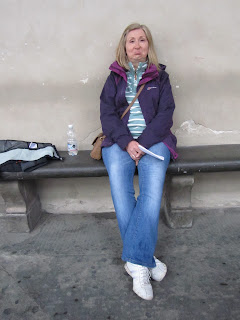 Queue number 3 lasted 15 mins and we were sent with our tickets to start queue number 4. And so we entered the gallery at last. Here is the gallery courtyard: 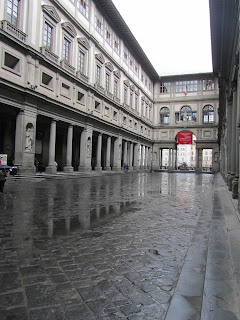 In a previous blog we had said how wonderful the art in the Doge’s Palace was. Well, the Uffizi was a whole new level of amazing with room after room of great art work and marble statues and busts. We had purchased an audio guide to listen to on the way around the gallery. It had a telephone style handset linked to a set of headphones by a wire. I used the handset and Rachel used the earphones. So we were tethered together the whole way round, occasionally lassoing anyone who got in the way! The best thing about the Uffizi visit was being only inches away from original art by people like Michelangelo, Botticelli, Leonardo Da Vinci, Raphael and Rembrandt. But we really loved the works by Botticelli, for their hidden meaning and Caravaggio, for their vivid colours. Unfortunately, we were unable to take photos inside the gallery.

Outside, the rain was now worse and we searched for a place to sit and relax – our feet were aching after the Uffizi. On the way we encountered the start of a 100km race (runners and cyclists). Cheers went up from the runners as thunder claps rumbled overhead and the starting gun sounded. Hundreds of runners burst forth along the street cheered on by the crowds that had gathered to watch.

By now we were cold and wet and a little fed up! Rachel found a pair of socks in her pocket and put them on her hands to keep them warm. I can’t help thinking that, had she sat at the side of the road with her socked hands outstretched, she would have made ten Euros within the hour! But now fortune shone upon us as we stumbled across a Hard Rock Cafe. God bless America! We were now warm and chatting to a very friendy bartender. We had spent three hours in the Uffizi. Now we were to spend another three hours in the Hard Rock Cafe! 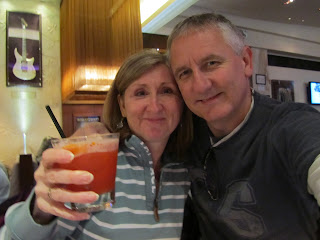 The walk home was grim! But the food, beer and rock music sustained us on our final ascent of Kilimanjaro.