Day 4 – Bologna, Florence, the beggar and the Blackberry

We left the hotel at ten and lugged our cases through narrow Venice streets, over a couple of canals and rushed to board our boat to the bus station, but missed it by about 5 seconds. No-one waits for you here. It’s do or die! It began raining and by the time we reached our car hire company the rain was lashing down. It was a bit of a slog getting the car organised but we eventually got on the road towards Bologne.We had decided to stop off in Bologna on the way to Florence to see what it was like. We wished we hadn’t! We stayed for about an hour and a half and to say that it was an hour and a half of our lives wasted would be an understatement. We felt like finding someone to complain to and ask for our lives back but we just wanted to get out. One mildly interesting thing about the city is that it has an otherwise unremarkable leaning tower. But so does Burano and Pisa and they are things of beauty and not a wonky stack of dirty bricks!

Anyway, enough of Bologna. Florence was our next stop. We arrived about 5.30pm and settled into our B&B; in a beautiful 3 story terrace somewhere on the edge of the city. We unpacked in double quick time and headed into town. It was quite a walk, all downhill, (more of that later) but we found ourselves near the Ponte Vecchio. 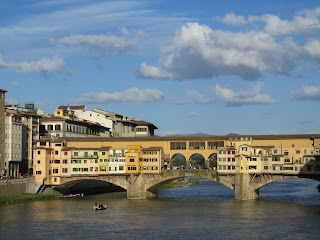 We headed for the Piazza Della Signoria. It was pretty empty and there was a great feeling of space. Standing in the middle you get a wonderful view of the Palazzo Vecchio, the Uffizi Gallery, the Loggia Dei Lanzi and a number of great sculptures. It’s easy to believe this square has been at the centre of politics in Florence since the 14th century.

Dinner, however, was a low point. It was one of those restaurants where you feel rushed and that the whole thing is going on at a million miles an hour without you in mind whatsoever. It felt like we had been dragged in, robbed and dumped out on the street: and all within the hour. We headed home.

A strange thing happened on the way home; one of those things that makes you stop and think and wonder about the human race. As we walked along we approached an old woman sitting, begging at the roadside, holding her hands out, together, in front of her. Her head was bowed, looking at whatever she held in her hands.This is not unusual in Italy. She wore a black shawl and her head was covered with a scarf, but you could see her grey hair beneath. She was clearly elderly. She had not seen us coming, but as soon as she did she quickly put away what turned out to be a Blackberry and resumed her begging pose, replacing the Blackberry with a vessel for collecting cash!

Now, call me old fashioned, but I thought that what usually qualifies someone as a beggar is:

A. They are desperately poor

B. They are homeless

C. They are desperately poor AND homeless

I don’t want to appear uncharitable, so I’m prepared to give her the benefit of the doubt. Maybe her contract’s nearly up and she’s hoping to upgrade to the new iPhone 5 with unlimited internet and texts and 2000 minutes talk-time. I’m even prepared to bet she’s after one of those diamond encrusted Pope Francis 2013 protector covers. But I’m betting on:

D. They may be a scam artist trying to cynically take advantage of unsuspecting tourists who, out of the goodness of their hearts may feel compelled to offer some help.

It’s enough to make you weep, if you let it. Anyway, for more news and info on this topic go towww.littleoldladyscam.com.

An finally, a geography lesson. Did you realise that they’ve moved Mount Kilimanjaro to just outside of Florence – and put our B&B right at the very top? No, nor did I until tonight. It took a good uphill 25 minutes to reach base camp. Then there was the final eye watering 100 foot climb to the summit. But we eventually made it and, with our knees and finger nails bleeding, we collapsed into bed.