Day 3 – Venice (and a canal-side rescue)

Firstly, I  should apologize for yesterday’s rant. It must have been one of those days! Today, I promise to be positive and tell you about the delights of our Venetian trip. Today has been truely wonderful: a wander through the Doge’s Palace and an idylic boat trip to Burano. The dramatic rescue came later!

On arriving in the Piazza San Marco this morning we noticed that sea water was beginning to rise up  through the floor across the whole width of the Piazza. This was of little surprise, as we learned from our last visit to expect flooding from time to time. It’s the nature of life in Venice. As the sea level rises, so does the level of flooding in the city, particularly around San Marco. A peek at the history of Venice will tell you why. The beginning of the flood: 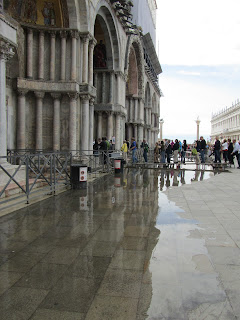 We took a tour through the Palace (Palazzo Ducale), which was the seat of  power for the Republic for nine centuries. The 9th century Byzantine style, later replaced by the present Gothic structure is a pure delight to the senses. Our necks were aching due to the constant straining to view the magnificent ceilings and art upon every wall in every stunning room. We  have never seen such artwork and could have stayed all day. This place housed the KGB of the time – small letter boxes were dotted about in the walls, where the city folk could post little notes to The Ten, anonymously telling them of neighbours who may pose a threat to security. That would seal their fate and they would likely end up in the dungeons and torture chambers deep within the palace. We walked across the Bridge of Sighs – one of the most famous places in Venice – where prisoners would be taken to meet their fate. It’s quite an experience.

The courtyard in the palace: 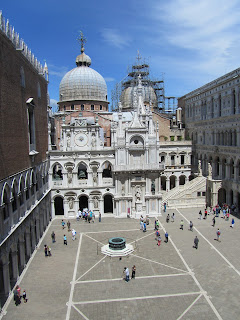 After lunch we caught the boat to Burano. The trip took about an hour – a welcome rest in sun and sea breezes. We spent a few pleasurable hours strolling around this charming town – I’ll leave these few photos to do the talking: 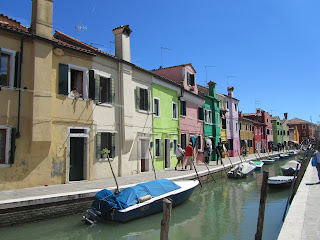 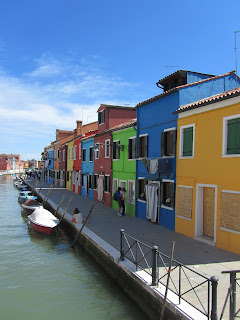 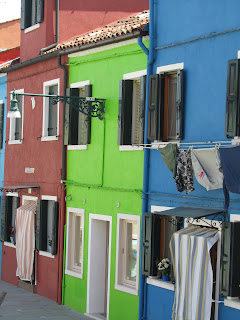 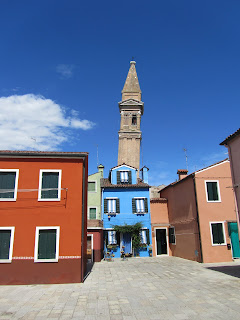 After the sight of the leaning tower Rachel needed a very large ice cream: 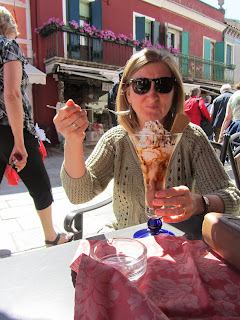 And one last look before we left Burano and headed back to Venice: 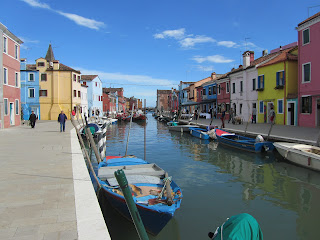 The boat back was packed and we had to stand all the way, but it didn’t matter as we had had a great time: 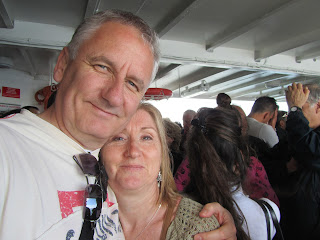 In the evening we ate out on the Grand Canal, just a stone’s throw from the Rialto bridge. We sat right on the edge of the canal watching the gondolas go by. And as the evening progressed the water levels increased until water was lapping up onto the reataurant decking and soaking our feet. We just rested our feet on chairs and didn’t care. But soon the water levels were such that the waiters started having to rescue people from their tables by placing empty beer crates, like stepping stones, from the flooded area to the main restaurant. Women took advantage of this and the men, being men, waded heroically through the water to safety. It was clear that this happens on a regular basis as the waiters came out wearing wellies to clear the tables. Everybody had great fun, laughing and joking about the experience. 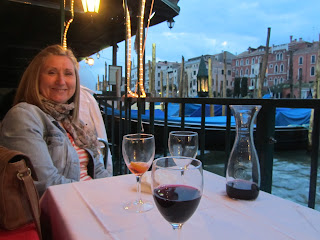 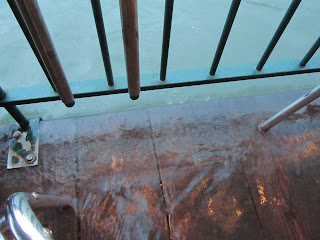 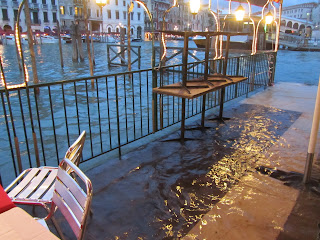 Later on,  while out for late night drinks in a great Irish bar, I ended up carrying Rachel, piggieback,  through flood water. It’s amazing just how much you can carry after a few pints!! Don’t tell Rachel I said that!
I’ll leave you with an image of Venice at night: 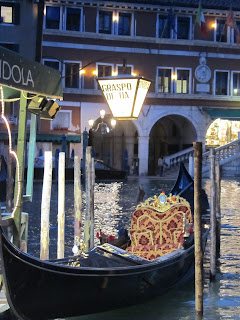 Tomorrow we leave for Florence.